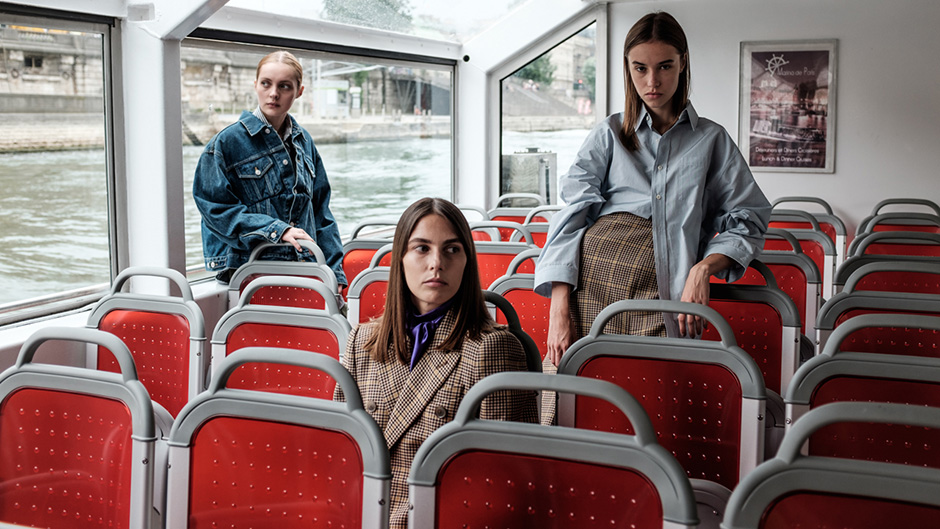 Many regard the greatest treasures of Paris to be such sites as the iconic Eiffel Tower, the riveting Mona Lisa or the photogenic La Seine. Danny Sangra, both the writer and director of the new Balenciaga x Mytheresa video, hysterically says otherwise.

The video pokes fun at today’s youth and their underwhelming enthusiasm for anything other than a smartphone. In the 2 minute video’s opening scene a tour guide, played by Corneliu Dragomirescu, expresses the historical significance of the Eiffel Tower to 3 unamused models: Adele Dietrich, Camille Gorin, Valerie Kopylova, who may as well be noted as emotionless, human lumps decked out in Balenciaga apparel. The models continue on with their blank, teen angst-esque stares towards the tour guide, with a few outfit changes here and there, as he desperately tries to excite them with new locations and historical sites.

While he is quickly leading them through a dark, desolate basement to get to their next tour stop, all of a sudden the models enthusiastically, finally come to life. They praise the basement as being the coolest spot ever in Paris, bringing the tour to a stop in order to take some seriously chic selfies. Was it simply the opportunity for good camera lighting that brought these youthful models back to life? Or could it have been because of the deeper desire that today’s youth has to find their own treasures in this world, rebelling against tradition?

Sangra gives us cute and funny but also gives us something to think about. Further he gives us a real, narrative story from beginning to end. Not only are we left laughing at the comical efforts of the short film, or thinking about what it means, but also a great synergy between two brands. The fashion powerhouse, Balenciaga and online retailer, Mytheresa.com are beautifully merged together in a way that shows off the product while enhancing the value of the two brands. The video is an engaging and comical way to appeal to consumers.

The video is surely bringing amusement to youthful, touch-screen audiences everywhere, along with many other of Sangra’s works, which can be found on his website.