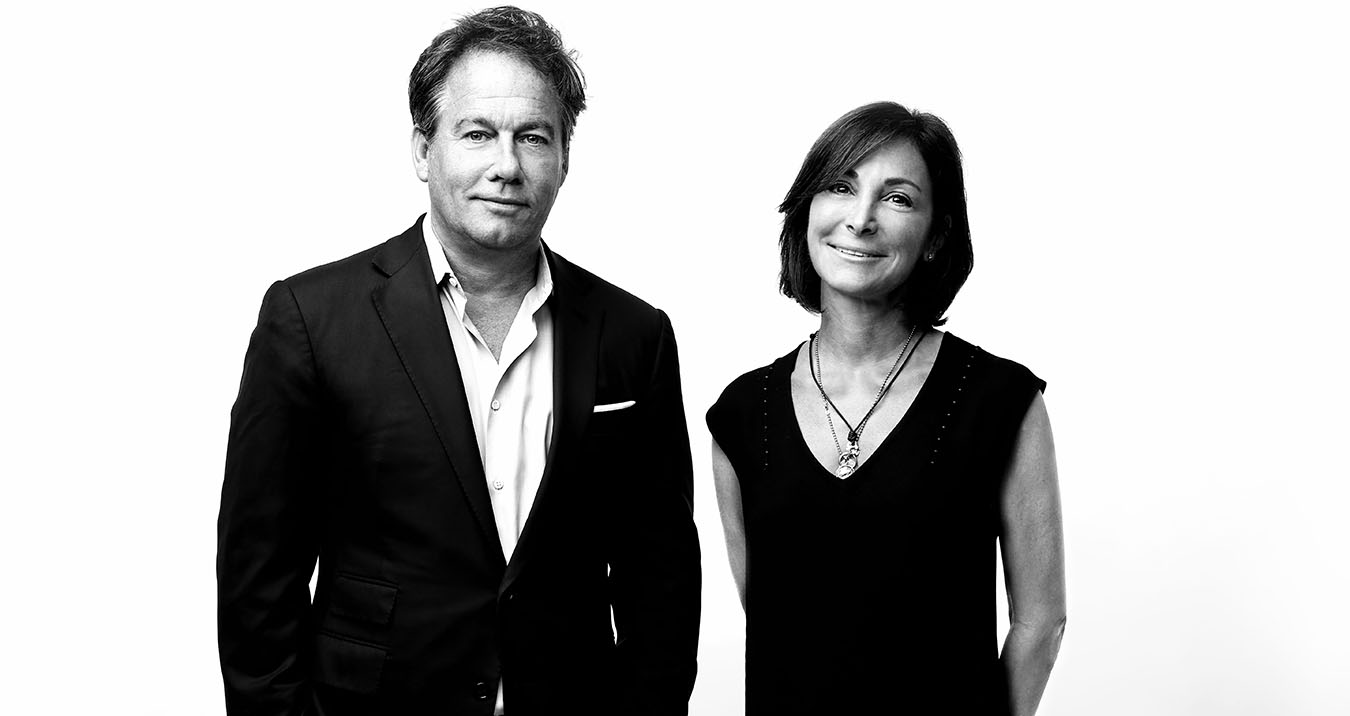 When it comes to navigating the ever-changing landscape of PR both in and around the fashion space, HL GROUP has become fashion’s go-to for the big picture. We chat with the well-respected founders of HL Group about the benefits of being diverse, navigating the fractured media landscape, the shift in content, leveraging influencers, Pokémon, Wonder Woman, and growing an agency in the new media age.

Lynn and Hamilton, excited to share your story and hope you don’t mind starting at the beginning. How did each of you get involved in the industry?
LYNN TESORO: My first job in the industry was working for Jeffrey Banks when he launched his collection for men and women with Oxford Industries. I then joined GFT, which was the licensing partner for Giorgio Armani. I was the Director of Public Relations and Retail Marketing.

HAMILTON SOUTH: My first job in the industry was at Giorgio Armani, where I did Corporate Public Relations.

Not a bad place to launch a career from, Hamilton. Is that where you two met?
LYNN TESORO: Yes, the person who was doing their corporate PR had left and Hamilton was his new replacement. I didn’t know Hamilton, but we quickly bonded over crazy meetings and endless days.

HAMILTON SOUTH: The first time we met was at a 6 a.m. meeting, and from there we quickly became friends. Lynn went on to run public relations and retail marketing for Calvin Klein. I went on to Vanity Fair under Tina Brown, where I started as head of special projects for Tina. I stayed there for about six years, became Editor-at-Large and then went on to Ralph Lauren as their CMO.

LYNN TESORO: Hamilton joined Ralph Lauren first, and called me right after and asked me if I would join him. It was an opportunity to work with another amazing American designer and brand. I was there for over six years as the senior Vice President of Global Communications and Collection Advertising. It was an incredible job and experience.

HAMILTON SOUTH: Between the two of us, we’ve had the opportunity to work with three of the greatest companies and brands (Ralph Lauren, Calvin Klein & Giorgio Armani) in the fashion industry.

Pretty solid base, but it is no easy feat to bravely launch a PR agency. What inspired you?
HAMILTON SOUTH: To be honest, the idea was not to start an agency. Basically, I left Ralph Lauren with no idea what I wanted to do. I had just bought an apartment at the time. I put a phone on a desk and started taking on projects as a consultant.

LYNN TESORO: Hamilton and I started talking about a partnership around the end of 2000. We wanted to create a different kind of agency.

HAMILTON SOUTH: Lynn and I saw two primary things. First, all of the PR firms at the time were specialists. We both felt very strongly that as the world started to change so rapidly, smart clients weren’t interested in just specialty advice. They wanted to work with people who can inform them across different sectors. For example, if you are having a conversation with a fashion client, the great ones aren’t interested in you telling them about what you’ve seen done in the fashion business. They are more interested in what is going on in other sectors, like how technology companies are addressing marketing and communications. We found this to be true across industries. Companies and brands want their communications counselors to pull inspiration and creativity from across a spectrum of industries. So we had this idea that we would set about putting together a firm that was able to offer expertise across multiple categories.

LYNN TESORO: In the early days of our partnership, we knew more about what we didn’t want to be than what we wanted to be. We knew that we didn’t want to be a company that just focused on fashion. At the end of the day, clients have to connect with the consumer and they have to sell products. It’s very easy to forget that sometimes in the fashion conversation.

HAMILTON SOUTH: We also didn’t want a firm that was led by two experts and then staffed by fleets of 23-year-olds, so we brought in other experts in different categories who were at similar levels to ourselves. Because of this initial approach to hiring and building out our firm, our teams now include a diverse mix of communications professionals from a variety of different industries, including fashion, hospitality, design, politics, investigative journalism, public affairs and others.

What was the first project when you knew you were onto something?
LYNN TESORO: From day one, we wanted to work with clients whom we found interesting and offered a broader conversation within media. We started with Tina Brown’s TALK Conference, which was really a microcosm of what we wanted our client roster to be – a diverse mix of brand thought-leaders who came together to exchange ideas. David Yurman was also one of our first clients, whom we still work with today. Like Yurman, we’ve been with many of our clients for 10+ years, and we’ve evolved and transformed with them along the way.

So let’s chat about your own transformation, as we all know starting a business can be lean and mean, with few days off, at best. Do you remember your first vacation as a business owner? Were you able to stay away or did you dial in?

HAMILTON SOUTH: Oh, I definitely remember this. We launched HL Group in April 2001, and I went to Europe the week of September 9, 2001. I was dialed in every four hours.

LYNN TESORO: I had little kids at the time and I think Disney with a “VIP pass” was the big vacation moment. As for calling in – always, and still to this day. I never really go incommunicado.

What would you say separates HL Group from the pack?
HAMILTON SOUTH: Lynn and I both came from big companies that are as focused on their business as they are on their fashion credibility. We tend to bring that kind of strategic thinking into the mix. Our pack is broader; we consider Edelman as a competitor for our consumer practice as much as we do KCD in the fashion business. The same goes for Brandman in hospitality, and Sard Verbinnen for our corporate communications work.

Communication is heavy work. Not only outside, but inside, too. What makes for a great relationship with a client?
HAMILTON SOUTH: Trust

Which makes sense, when you think about your long-term relationships with clients. How have you seen the game change over the last five years or so?

The fracturing of the media landscape has been a huge game changer for anyone working in the communications field. The way consumers and audiences find, read and consume news and information has fundamentally changed.

LYNN TESORO: And, of course, the influencer landscape continues to rapidly evolve as social media provides more and more platforms for individuals to create and monetize themselves into brands.

There’s been a shifting understanding of content in the past few years. When we started in this industry, there were a limited number of storytelling tools. Now there are an infinite number of them.

HAMILTON SOUTH: Social, digital and experiential are incredibly important parts of any communications strategy, and it’s essential that we help clients integrate these tools into their mix in the right way.

LYNN TESORO: I also would add that clients are looking for that broader expertise more so now than ever before, and I think we are well positioned to address that kind of thinking, given the DNA of how we built this company.

What would be an example of how you are leveraging influencers?

HAMILTON SOUTH: We work with influencers on behalf of all our clients, across fashion, beauty, travel, design, everywhere, and we incorporate influencers in every campaign we create. But the definition of an “influencer” is an evolving one, it continues to expand. You don’t need a million followers to reach a million people. One good example of a campaign we recently worked on was with Expedia. We’ve been a partner to Expedia for more than seven years, as their global and US AOR. Expedia, like everyone, saw the Pokémon Go phenomenon explode. And in Brooklyn, there was a single man, Nick Johnson, who had captured all of the Pokémon available in the US. There were three more Pokémon out there. He needed to get to Sydney, Paris and Hong Kong to complete his collection.

So Expedia stepped in and helped him. Our team here at HL worked with Expedia’s global teams to engage with Nick, to create an itinerary to fly him around the world. And what was lovely about this campaign was that it wasn’t pegged to a press release. Journalists were following his social feeds in real time. When he captured the last Pokémon, the coverage was suddenly everywhere. In the US alone, coverage appeared in Fast Company, GQ, BuzzFeed, Mashable, Business Insider and Thrillist a short while after he posted a message online saying his mission was complete. Coverage exploded in Asia and Australia and Europe as well.

It’s a good example of being opportunistic about partnering with influencers, and of recognizing how quickly influence can grow. At the outset, Nick was a software engineer and a gamer with a fairly normal social following. In a week, he was a global phenomenon. HL was proud to have played our role. The media coverage cited Expedia as having helped Nick succeed, which filters their brand into a story with worldwide reach. Smart companies are expansive and opportunistic when it comes to their influencer strategies, and this was a prime example of that.

You mentioned broader expertise being beneficial; how has a fashion house leveraged that expertise with you?
LYNN TESORO: We have been an agency partner for DVF for a number of years and beyond the work we do for their shows for Fashion Week, we’ve executed on a number of large-scale brand initiatives to strategically position them outside of the fashion media. We’ve facilitated partnerships for DVF with tech and entertainment brands, such as Warner Brothers and DC Comics for the creation of a comic book, Be The Wonder Woman You Can Be, starring Diane von Furstenberg, and HP to debut the HP Experience Lounge in the DVF Gallery for Fashion Night’s Out.

Where do you see the agency going next?

HAMILTON SOUTH: EMEA, for sure.

And what are you looking forward to?
HAMILTON SOUTH: I’m looking forward to my trip to China in the fall. I go 3-4 times a year for business and love every minute of being there. The people there are so smart, hardworking and inspiring.

LYNN TESORO: A vodka on the rocks. Kidding!… Honestly, moving the agency forward and continuing to be inspired by the work, having my kids graduate and find fulfilling careers. It is my hope that they enjoy their work as much as I enjoy mine.

Lynn and Hamilton, really appreciate the time today and good luck on the upcoming fashion month!