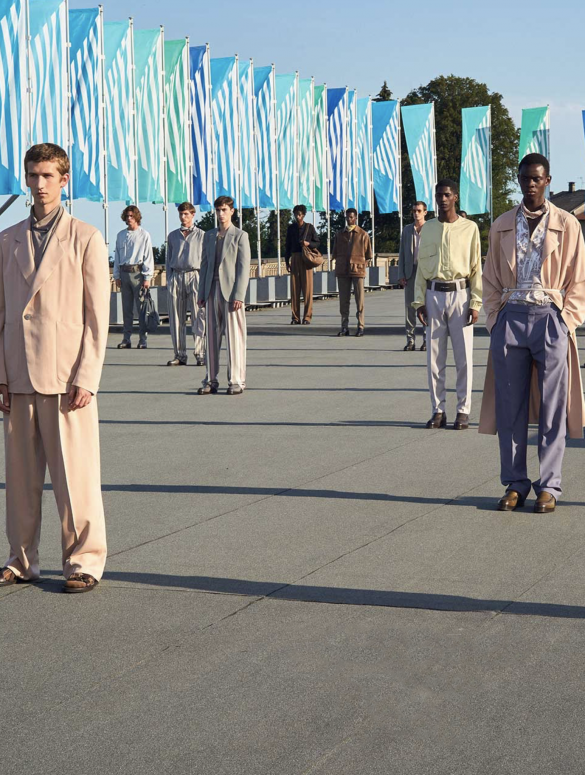 On this last day of Milan Digital Fashion Week, the focus has been one of introspection, and of looking inward to find the way forward.

Coming home through the vastness of nature offers Sartori a chance to reflect on the brand’s anniversary and address what kind of clothes the younger male consumer would prefer today.

That means very soft constructions on jackets and suiting that are almost no constructions at all – navy wool large patch pocket jackets with cigarette pants, light brown, light salmon or mustard yellow tropical wool with one button slightly cross buttoned with loose pants, and a leaf green one buttoned jacket with large flowing pants. A grey jacket with shorter sleeves is as loose-fitting as a king-sized tee shirt. The light blue striped double-breasted suit and the cropped green and white blazer with light gray loose pants are two strong looks with a little bit of pattern that breaks the predominantly monochromatic color range in fabrics consisting of wool, hemp, linen, silk, and a range of #UseTheExisting wools.

Home is where the Zegna traditions of tailoring, manufacturing, and production reside and because of these traditions, Home is also where Zegna will be investing in innovative technology to push the company forwards and towards an efficient and sustainable production model now and in the future.

This will align Zegna’s values as a brand with the values of their global customers who now are adamant about purchasing products from brands that share their values and outlooks.

“Who says there are just colors?” Rosita Missoni said in the opening section of the video premiere of “Being Missoni – Memories from the Future”, a short film that recounted the history and the relevance of the Missoni brand over the last seven decades.

It is not a coincidence that the images of the colorful wool yarns opened the film. These yarns have become the ingredients for the construction of the family business that Ottavio and Rosita founded as their namesake brand in 1948 and expanded with their trademarked signature zig-zag patterned knitwear in 1964. The creative torch has since passed on to their daughter Angela and now Marguerita, Angela’s daughter.

The names of different chapters of the short film – Iconic Colors, Family as Lifestyle, Style and Tradition, Tenacity and Innovation – summarized not just a business but what may be one of the last remaining independent fashion businesses still run and owned by the founding family.

“It’s always been a family-run firm. The kids and the children came and played,” Rosita Missoni said of the philosophy at the core of Missoni then, now, and in the near future.

Gall is the brainchild of Justin Gall and Chiara Nardelli. Nicknamed the Italian made activewear brand based in Rome since 2014, the outwear heavy focused label is known for its bright colors and graphics coats, anoraks and parkas coupled with high performance and functional fabrics.

Gall’s outerwear pieces are more like armor than clothes. The brief video shows the brand’s aesthetics with a model placed somewhere in the middle of the wilderness, with a seemingly threatening environment encroaching with perhaps just the Gall parka for survival.

In these tough times, it’s comforting to know the protection from a great coat, especially a Gall coat.

Children Of The Discordance

The filmed presentation of the Japanese brand Children of the Discordance opened and ended on wheels with loud blasts of accompanying music, and all the different guys raced in a fast-paced performance of skateboard tricks in their new spring wares, through the streets and alleyways of Tokyo during the day and night.

Founded in 2011, this coming season’s ‘The Protect Archives II’ draws on its own work and archives as a platform for remaking some of the brand’s best offerings, especially the vast work in sourcing a variety of fabrics like its paisley pattern, now in a brown oversize shirt paired with printed shorts or in a red patchwork paisley hooded sweatshirt or blazer.

The mood of the video surely corresponded to the fast lives of Children’s consumers who would not be disappointed to find again the pieces they missed in the past.

Milan Digital Fashion Week proves one thing with such clarity – digital platforms are not the ideal way to replace physical shows.

While the physical shows from Etro and Dolce & Gabbana were great and commendable efforts, they felt too much like singular events like a far-flung resort show than part of the Milan shows. The pop-opera group Il Volo performed their uplifting songs throughout the Dolce & Gabbana show as the models paraded on the courtyard of the Humanitas University Campus, wearing navy and blue printed patchwork tile patterns.

The stunning Prada presentation was exceptional because the brand provides the concept, the execution, and the clothes in an all-out assault to capture the digital audience. But great clothes have to be the departure and the arrival points, both digitally and/or physically.

At the end of the day, all these clothes from all these collections are just the final products of a creative process from idea to implementation. They just have to be great no matter what the medium and the media.