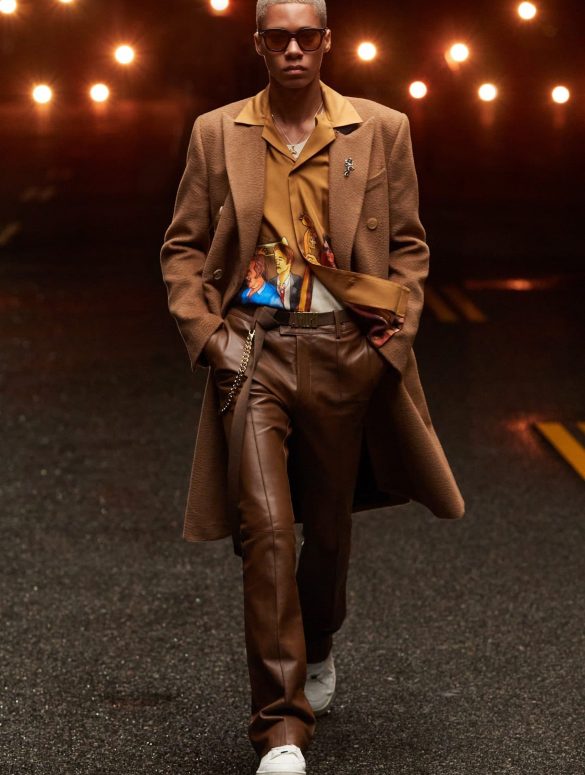 The Amiri fall show’s opening looks staged in downtown LA where the designer Mike Amiri opened his first studio in 2009 intended to celebrate the decade where the former industrial area has transformed into a hub of multi-media creativity.

While the gentrification and the transformation of the downtown area of Los Angeles have been ongoing and now even accelerating, it is not clear how this fall collection represents this transformation’s juice. A sense and a taste of the community of artists and their respective fashion that has been at the center of these dynamic changes
is not apparent here.

The show’s taping was physically taking place on the 4th Street Bridge itself, with models walking across the viaduct day and night time. Still, the actual clothes have little to match this environment, even on a spiritual level.

This fall collection reminisces and is a direct descendant of the early days of those Sean John collections shown in New York in the early 2000s at the height of the ghetto fabulous era in a particular intersection junction music and fashion at the time. Specifically, this Amiri show feels very much like the Sean John Fall 2001 show at the 7thonSixth tents at Bryant Park in February 2001. I remembered that show capping a moment in the recent history of menswear. It was the first street-luxury aesthetic merger. Now, this Amiri DTLA moment misses this cultural tangency moment that can make fashion a bit more meaningful.

Well, in the meantime, throw in a few derivatives of Tom Ford men’s looks over the years, and there is what seems to be the direction of this Amiri fall collection intended to celebrate the community of downtown LA past and present. Well, the DTLA is supposed to be the new mood encapsulating this fall collection.

But the cultural tangency cited by the creative director and founder Mike Amiri employing the downtown LA art scenes as a new aesthetic deep well for the brand is at most superficial.

What Amiri stands for from this collection isn’t clear – in fact, the founding ideas officially launched the brand in 2014 have more or less dissipated. The genesis, in the beginning, is in finding the authenticity based on the skate-punk-indie rock aesthetic coupled with the idea of hand-made garments in the kind of camaraderie of groups that bonded together, not just in finding common grounds in thoughts, and also in the types of clothes.

The nascent and underground skate, punk, hip-hop scenes in the Los Angeles County region had a localize flavor, exceptionally how the youths of the 1980s and 1990s crafted their versions to rely on the indigenous cultures of these underground movements.

Punk music mutated into hardcore, new wave, and death rock, then alternative post-punk rock, along with how these young musicians dressed as part of their stagecraft wardrobe that differed little from the kinds of clothes they wore in their lives off the performance spotlight. Bands like The Damned, Social Distortions, Kommunity FK, GBH, Henry Rollins & Black Flag, TSOL, Alice Bag, and Minor Threats were children of LA’s Punk golden era.

Live music and life merged with the same hair dyes, Doc Martens and metal spikes, and hand-painted murals on the essential black leather bikers. One of the problems of basing a fashion brand’s aesthetics on specific and recognizable subcultural movements and identities is that it can become stagnant in terms of not knowing how to evolve this founding premises forward in any meaningful manner. It is how the fashion associated with this music life has changed.

How does a black boiled wool pantsuit fit in now even as the brand evolves its artistic direction?

These intersections have provided a foundation at the Amiri brand’s launch pad that has disappeared into thin air in recent seasons. The brand garnered forces and capital for expansion, first with staging appointments, then showing during Paris men’s fashion weeks, then selling a stake to OTB as capital for this underlying drive to magnify the business.

The meaning and perhaps the power deriving from the strength of personal explorations inherent in this amalgam transformed into a music-art-fashion brand project has pretty much dissipated, at least here in this fall collection presentation.

However, now, these are just expensive fall clothes with so little of the accouterments of the brand’s founding aesthetic attached to them directly, even with this new turn to embrace the DTLA movement. That’s a profound dilemma for Amiri, both the brand and the founder designer, in asking what the aesthetic is for the future and the profound challenges of moving forward now that the old narrative no longer suffice.

The odd thing about this fall show is how far the clothes have changed and how the brand’s ideas have remained stuck in a different era. It is difficult to identify these fall offerings with little to do with the DIY premises of Amiri’s early years. These premises can no longer serve the needs for expansion but an expansion of commerce, not aesthetic grounding.

There is nothing wrong with a great black fine leather double breast jacket paired with a beige cashmere turtleneck, and a washed flared denim jeans. Or, for that matter, the perfect double breast leather coat with a shearling collar and a pair of black wool pants.

Is it possible to sell expensive clothes without the need for ideological reinforcements?