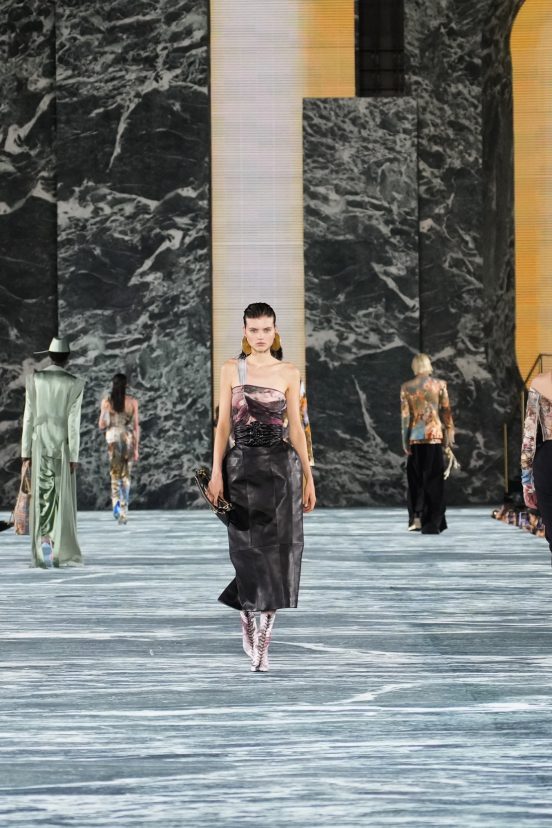 Balmain Believes in the Power of the Craft

Olivier Rousteing’s showmanship is equivalent to that of a theatre director, with each show he produces for Balmain, it is as if they are presented as a play with a series of acts, but in the case of the runway format without the intervals. And for all the calls to edit down or edit out, the way Olivier has led the brand has manoeuvred it into a place of success, so why the need for restraint?Especially at this level, when we can be presented with a collection like the one we saw today, with a clear vision and enough diversification to cater to the needs of all the global retailers who carry the brand.

Leaning on the tactility of natural materials, Olivier worked with linens, wood, rafia, and silk to prove the power of craft as an elevated medium, which is inherently embedded with the luxury of the time it takes to create each piece

Making history modern is a theme running through this season, and here Rousteing took the idea of reimagining fresco-style paintings as works of bodily art.  Inspiration that was first inferred to on the brands Instagram account where figures depicted in art form were placed in modern day scenarios – a design studio, the club, and the very stadium that was the setting for tonight’s show.  These depictions of original artwork – such as Paolo Veronese’ “Mars and Venus United by Love” – in the now were a collaboration between the house and Alexey Kondakov, a self-professed ‘Surrealistic Documentary Photographer’ whose placement – or misplacement – of art gives the world an almost ethereal quality.

As a result of his time working as a guest designer for Jean-Paul Gaultier’s couture line, the influence in the second act was a creative turn for the brand, which despite swaying a little too close to his world, had enough original ideas to make it 100% Balmain. Botticelli-esque all-over prints were used for short suits, graphic t-shirts, wide leg trousers, and of- course the corset.  A favourite among the Gen Zers, next season they get to play with the silhouette as a layering piece, whether as an off-the-shoulder top with exposed seams or a chiffon slip dress with fishtail hem.

Natural materials were a hit across the city’s this season, as designers looked to reimagining the silhouette in a humbler way to match the current mood and take a more considered approach to design. Linen, leather, wood, and raffia gave the pieces in the first act an artisan feel that was more rustic in outlook, not something immediately associated with the brand, but it worked.  The opening looks that were re-works of the infamous cage dresses became almost objet d’art or sculptures in their own right, merging art and fashion as one. The wide leg trousers benefitted from the fluidity of lightweight wovens, as each style pooled around the models feet, and draped front tops and wrap-over tunics from the mens portion of todays proceedings gave a glimpse into how the Balmain aesthetic could translate for vacation wear.

The last act felt like a deeply personal cathartic release, as the last 5 looks – bar one – were emblazoned with a flame print, which could be interpreted as Rousteing turning a tragedy (the designer suffered severe burns after a fireplace explosion last year) into triumph and taming the element as fluid dresses and separates.

With close to 100 looks a season Olivier has become known for his showmanship, taking the platform and resources he has been afforded to explore and stretch his ideas over a series of cohesive themes, into a collection which continues to mesh with the history of the brand

Possibly one of the hardest working designers in the business Rousteing presented a collection that consisted of both men’s and women’s looks and, for good measure, a couture section that closed out the show, and with close to 100 looks a season, Olivier has become known for his showmanship, taking the platform and resources he has been afforded to explore and stretch his ideas over a series of cohesive themes into a collection which continues to mesh with the history of the brand and shore up its future in the luxury marketplace.