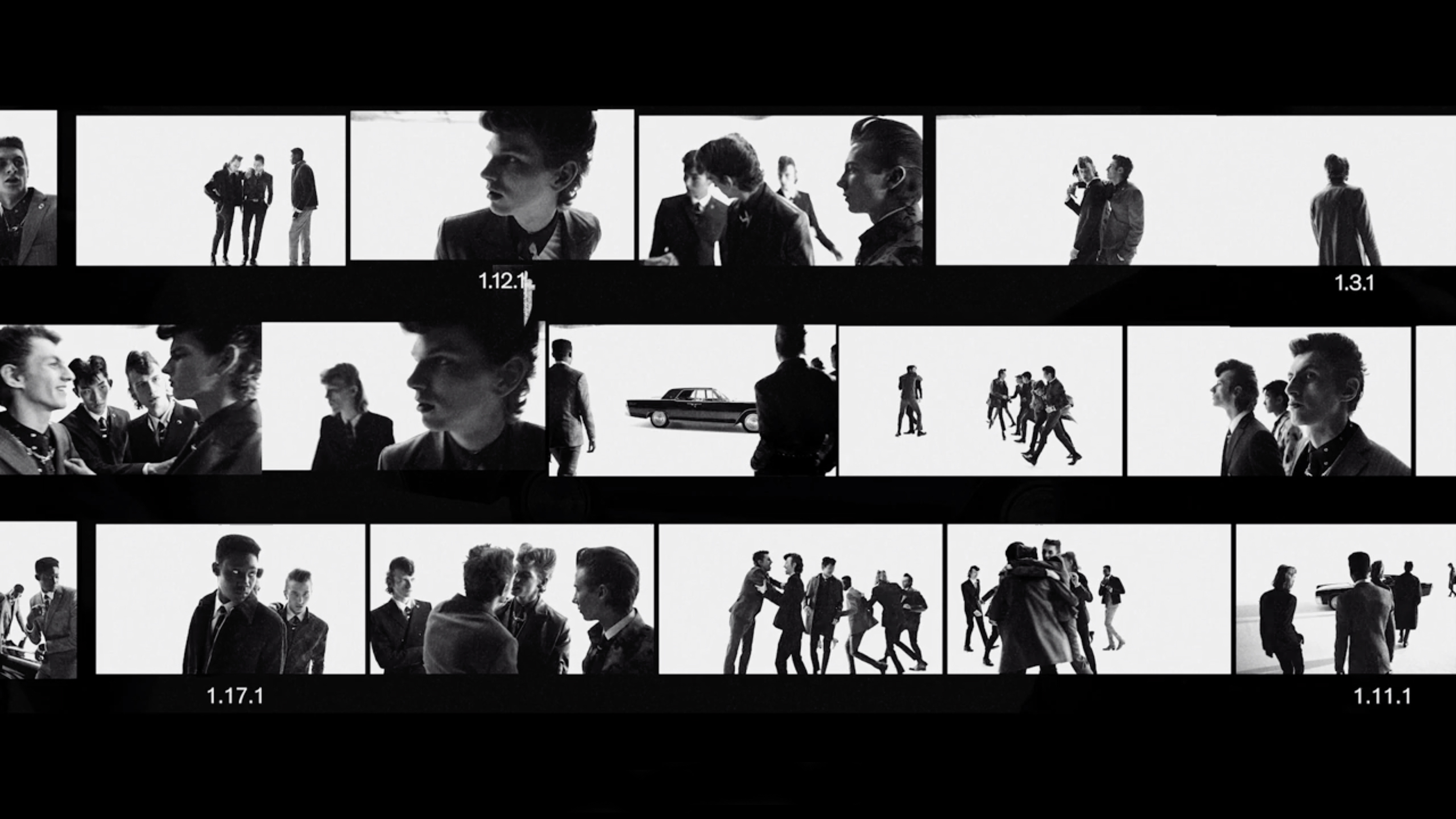 Fall 2019 saw branded fashion films fully transition from a secondary to a primary medium for many a fashion house. As fashion houses’ own communication networks have become both more meaningful and lower in promotional cost, the return on investment for film has increased and The Impression predicts its continued rise. A number of houses have leveraged the medium in short series which we will speak to later this season. Here Chief Impressionist touches on a few of his favorite campaigns Best Fashion Ad Campaign Films of Fall 2019 and why.

With Attal’s previous work capturing the essence of urban life, his artistic development in the ad campaign film fits perfectly to the spotlight of suits and prominent work fittings. Jean-Pierre Attal previously released a similar work conveying the solitary act of commuting that masses of people do together everyday in 2012. With no interaction between models in the fall ad campaign, each walk is solely based on the individual’s intention. For such a multitude of people performing the same act, the immensity of self-isolation is a striking juxtaposition.

Museums, much like an outfit are curated. They both encompass thoughtfulness and beauty. Fabien Baron’s recent fall 2019 ad campaign for Boss demonstrates the intention of the artist in both the fine arts and fashion. Utilizing a mysterious soundtrack by Nils Frahm entitled Mi (Soul Channel Rework) three gallery viewers witness themselves frozen as black and white portraits, as installations in the gallery. The more the viewer engages with their twin, it awakens, and the body inside finds movement and color. Scores in the audio indicate when there is a passage from the physical world into the world inside the frame as Baron wisely leverages one of films most underutilized aspects, sound. The piece brings the artwork of Robert Longo as well as Jordan Peele’s 2017 directorial debut Get Out to mind. As creative director, Fabien Baron has created a campaign that is worthy of analysis as an art installation in itself.

“Incanto” is like a visual poem, meditative and entrancing. The ad campaign’s short films entice the viewer into an alternate reality. They go willingly, giving up their time like an offering – and in this day and age, it is time that is the greatest of luxuries.

Cohen has imbued the film with cheeky visual references, such as two models driving a convertible in front of a grainy film projection of the streets of Naples circa 1960, and a salon whose walls are adorned with vintage photos of Sophia Loren at the peak of her silver screen glamour. Cumulating with an oversized bowl of spaghetti, tomato sauce, and fresh basil, the film portrays a day in the life of a cornucopia cast members all on their way to a once in a lifetime meal. Buon Appetito!

Marrying decades the story is a flashback to the time where lab coats, big hair, and large glasses were the assets to create the perfect collection from concept to runway.

Gucci Creative Director Alessandro Michele, in collaboration with Art Director Christopher Simmonds and photographer Glen Luchford, has constructed a time capsule of the fashion industry bringing to life a collection in Paris circa 1970. Despite centralized viewpoints from the past, Michele and his team send a message: Gucci is paramount in fashion, now, then, and always.

Noted for his obsession with history, it is no shock that Alessandro Michele is utilizing an antecedent reality to promote his foresight of fashion now. While some may believe referencing the past adheres to being stuck in it, this campaign is not to be confused or slighted. Michele is cunningly using the legacy and romanticization of cliche’s in Paris fashion to further market their clothing to both those who have this experience and the younger generation who idolize it. With this ode to the fashion industry, Michele convinces us that, in his and Gucci’s case, no longer do the times dictate and create the man (and his wardrobe), but it is indeed the man creating the times.

Featuring a couple whose argument causes the physical collapse of their apartment building, Lacoste’s film’s minute and a half run time hardly belies the astonishing amount of emotion Megaforce have managed to craft. The opening argument’s tension is palpable, heightened by visual details such as actor Kévin Azaïs violently yanking a polo over his head and ample employment of shaky camera. This craftsmanship does not diminish during the visually gripping action sequence, which culminates in homage to silent film star Buster Keaton’s most legendary stunt and a return to intimacy as the rubble transforms into the room in which the film began. Edith Piaf’s “L’Hymne à l’amour” fits perfectly with the duality of the film, soaring as the building collapses but resolving into more gentle sustained notes as the couple embrace in the film’s final seconds.

Success often makes those who attain it seem more than human, individuals whose talents are so awesome that they must have been acquired by some divine grace and not mere practice. Either Way, the short film produced for Loewe by Jonathan Anderson with collaborators Steven Meisel, M/M (Paris) and director Benn Northover, rejects this notion with its intimate portrayal of Emmy and BAFTA-winning Killing Eve actor Jodie Comer. Hovering just behind Comer and panning from mirror to mirror, the camera captures scenes of the actor warming up before a performance. Comer shuffles through a plethora of emotions with an intensity that belies both her talent as a performer and the dedication with which even she must practice. Although each emotion she portrays is unique, there is a commonality between them in the single word she utters with each performance, “LOEWE.”

The campaign shares Marni’s Creative Director Francesco Risso’s vision of the season full of rich coloration, texture, and kinetic energy. Stephen Galloway is perfectly suited behind the lens, understanding how to translate a dynamic collection into a short narrative that captures the spirit of the collection and the engagement of the audience. For his first outing as director, Galloway leverages a tool few in fashion have yet to master, that of a fisheye lens.

Ralph Lauren is a romantic and here that romance is reflected in the opening statement itself, “Tell me the story about that pair of jeans you will never forget.” The request is that of a romantic seeking to learn more from a soulmate. “Tell me about the person, the moment, the feeling you will never forget.” These are questions only a storyteller probes with, pulling back the veneer to build stronger bonds.

The decision to frame the Valentino x Undercover collection in a world of retro-futurist art feels important. Tetsuya Nagato’s use of painting and collage, rather than scientific photography, situates the campaign in a world of the imagination, an alien fantasy of abduction and exploration. Its scope is not merely limited to the earthly and human; it reaches across the cosmos, encompassing both what is and what could be. But the fantasy is still humanly seductive: there is a certain allure as we see a man’s head slowly disappear as he rises upward into an alien spacecraft, a sense of empathetic longing as he takes his eyes off us and fixes them on the night sky.

The art direction and cinematic direction of the Zara Fall Men’s film is stellar. Fabien Baron is at the top of his game, building dynamic drama with hints of the Mods getting ready to rumble in Quadrophenia. The pacing, camerawork, editing, and music combine to present a menacing thriller. The leveraging of the memory of film strips, but updated in a modernist take for the viewer to fly through is straight out of the strongest of Hollywood productions and speaks to his gift as a storyteller.