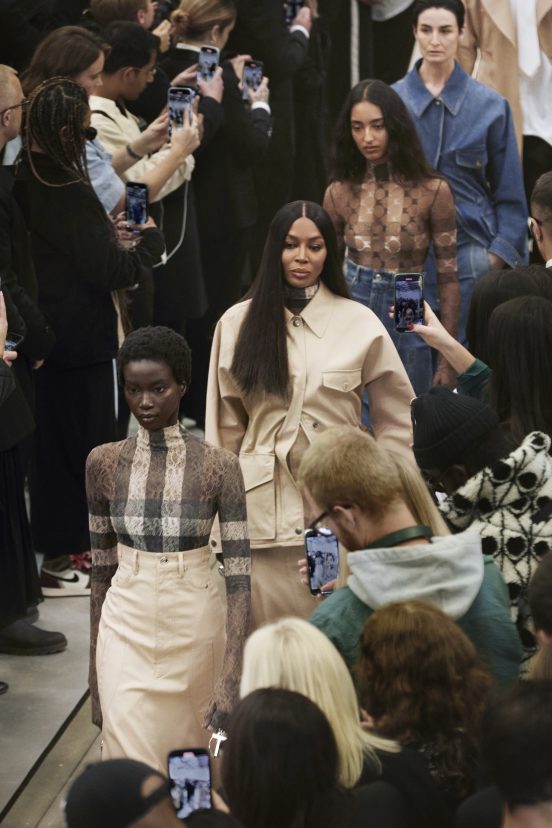 For Spring 2023, Riccardo Tisci takes Burberry for a beachwear-inspired exploration of clothing’s dual purpose to conceal and reveal – but the literalism and rigidity of Burberry’s house codes still feel like an obstacle to the designer’s creative ambition.

The collection is inspired by the beach as a place where humanity meets, a point where different worlds collide,” explained Tisci in his show notes.

“The tension between dressing and undressing, between revelation and protection, underwear and outerwear… I was inspired by the liberation and openness of youth, of people embracing their bodies and revealing them – a pride in themselves.”

This reference to beachside dressing or undressing doesn’t manifest too literally (other than the flip flops, sun hats, and diving goggles), instead making itself abstractly felt as a deconstructionist sensibility that reworks familiar codes with new design principles of exposure and revelation. Removed sleeves become waist-defining belts; bodysuits are worn over dresses, while elsewhere exaggerated fishnets are worn under them; underwear details like garters and clasps are made into visible structural features of outer layers; the lines of strappy bikinis inform tops and dresses. Defying the unspoken cut-out code that certain things must remain concealed, a few dresses are given what can only be described as butt-windows.

A sense of the gothic romance that characterized much of Tisci’s iconic run at Givenchy threaded its way through the collection, palpable in the lacy and sheer layering, as well as the forays into kink. What may prove to be the collection’s best-selling piece were the accompanying T-shirts and sweatshirt printed with esoteric, secret-society-esque graphics and slogan. Subverting the feeling of sunshine suggested by the beachy inspiration, luxurious off-the-shoulder velvet gowns struck deadly all-black silhouettes to close out the show. Also tying into this movement was the introduction of a new bodycon, lacy tights fabric with a monogram that incorporates the house’s historic equestrian knight logo, and seems primed to rival Gucci’s similar pattern.

Though the collection sees Tisci interested in exploring design ideas that feel distinctly contemporary – as opposed to last season, which felt like a deep dive through the history of British bourgeois and aristocratic dressing – as in most of his collections for the house, his work feels like its pushing against the restraints of the Burberry identity that hem it in. While Tisci is working to move fashion forward and look beyond the boundaries of established codes, Burberry’s codes are so literal and historically minded. Each time a trench coat (no matter in what way it’s slightly “reimagined” this time around) or a familiar brown check appears, we feel brought back down to earth, like Tisci is making a forced concession to the requirements of Burberry Britishness and commercial appeal.

It is thus difficult to find clarity and cohesion in the collection as a whole – its identity feels fragmented. Nonetheless, there are shining moments of brilliance in design and layered styling.

Tisci does strong work with the tools he’s got, and we’re grateful for it – we just can’t help but wonder whether his relationship with the house is still mutually beneficial.