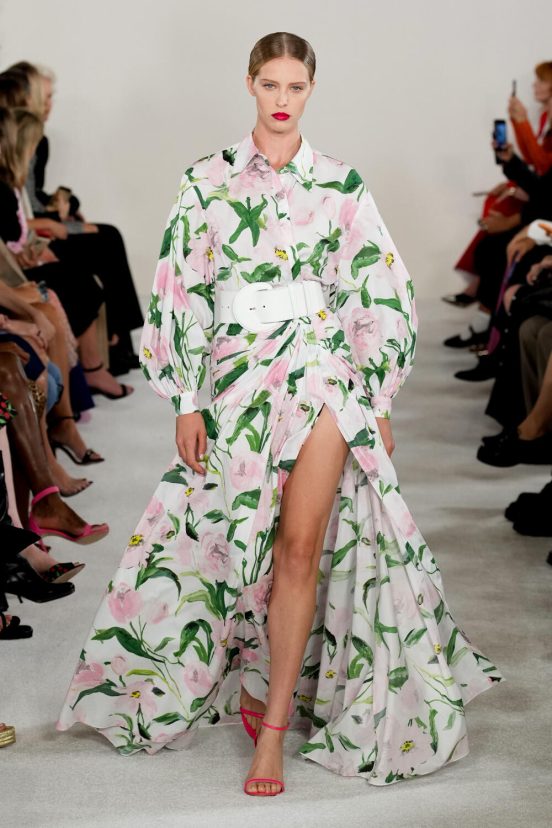 The Carolina Herrera blouse is recognizable if you know what to look for.  Herrera herself wore one on several occasions showing its versatility. She wore it like a work shirt, a power lunch look and sometimes as a black-tie evening piece.

Creative director Wes Gordon brought the blouse center stage  in the spring collection and the attention could eventually make it iconic, it really depends on where the brand takes it.

I think I spent a lot of my career as a designer afraid of really embracing the things I love; and trying to chase what other people think is cool.

Gordon has plenty of other ideas.His refined and ladylike take on spring is defined by romantic floral prints, off-the shoulder dresses and sweeping daytime and evening pieces.

Inspired by the classic children’s book “The Secret Garden” , Gordon uses flowers throughout.

The 56-piece collection brimmed with his passionate sense of color from florals like peony prints to a boldly striped dress in fuschia and orange. The idea extended to the beauty palette with some models glamorized with bright red lipstick.

With each season, Gordon makes color more characteristic of his collections and shows his mettle in this area. Accessories were another place where he played with it in orange hoop earrings and a tubular bag in hot pink.

This time, he said, he unapologetically went after beauty –  florals, color, drama and glamor. “All of the promises Herrera makes to our clients around the world and the reasons they come to us,” said Gordon. “ I doubled down on it.”

Reflecting on going all out, he added, “I think I spent a lot of my career as a designer afraid of really embracing the things I love; and trying to chase what other people think is cool.”

He feels freer now and the collection preparation embodied that spirit. “ Rosettes made in the atelier, big skirts, Barabara Streisand playing “Hello Dolly”. It was exuberant with a capital E.”

Life is good and Gordon is embracing it. ‘Overall, I’m a very optimistic person,” he said. He’s married to his best friend,  the love of his life. They have one 15-month old kid and another on the way, a dog and a job he loves, he said , ticking off his gratitude list.

“Every day I wake up smiling, That’s not to say there aren’t bumps along the road.” But overall, he said. “ I’m a very optimistic person.” And this was a very optimistic collection, it seemed to speak of hope now and sunnier days ahead.