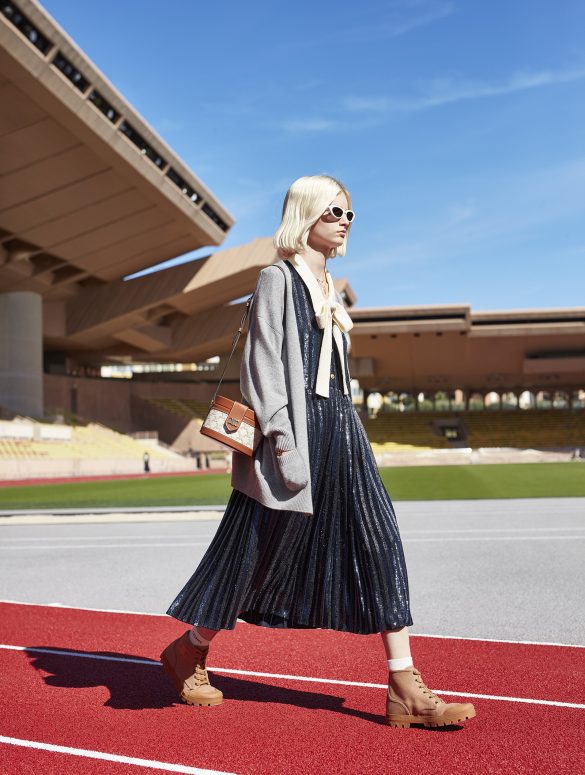 A few days before the official unveiling of the spring collection ‘show,’ Celine released a series of teasers featuring black and white the carabiniers du prince the prince’s palace guards wearing their crisp and sharp white uniforms and white casket with black feathers atop carrying black bayonets patrolling back and forth at the front gate, a short color film with shots of the gold gilded palace of Monaco with its fanciful crystal chandeliers and carved and painted ceilings and walls, and detailed shots of the grand decorations of the palace exterior conjured the images of tranquility and surely gave the sense of order and discipline rather than one of the struggles in this precarious time.

These images of the prince’s palace guards in their immaculate military uniforms recalled the beating of the drums by members of the Garde Républicaine at Hedi Slimane’s debut Celine show in late September 2018 in a rectangular tent built in the square in front of the gold dome of the Hôtel des Invalides, the final resting place of Napoléon. Then and now, Slimane ushered and imposed a new aesthetics order for the brand with the calculated discipline and precision of a military maneuver.

Today, like the men’s presented at the nearby car race track in July, this spring collection is about ‘documenting’ the portrait of a generation that has evolved to a new taste and a new mood not necessarily taken from the current context but independent of the on-going malaise.

Driven by youth culture, the clothes still dressed but dressed down the formality are meant as a wardrobe for the long-term rather than something seasonal.

For Hedi Slimane, clothes have always served this grander purpose, and his clothes have evolved each season as the lives and the tastes of the young generation changes. This was how Hedi Slimane has always pursued in his fashion projects since his start as Yves Saint Laurent Rive Gauche Homme in 1996 where his Black Tie show for Fall 2000 was a defining moment in the history of menswear cementing the slim fitted black single breast suit as an anchor of how men should dress then. The Spring 2020 collection shown in Paris in late September 2019 was another prime example of this constant evolution, moving away from the night club glamor of the previous season into comfortable day wear with a whiff of the Paris scenes in the late 1970s. It was this pace in which the designer sensed the coming of a new mood in the air and made the clothes that were situated within the confines of this new schadenfreude.

Here the clothes are a bit less noticeable – like everyday clothes – that even a lightly sparkle light brown long dress is paired with a red-brown plaid long sleeve loose shirt and black leather Chelsea hiking boots and a cotton green camouflage cap to break up any sense of formality or evening feel to the dress which normally would have been shown in a more glamour way and another epoch.

Now Slimane forged ahead with a soft, relaxed, nonchalant collection based principally on sportswear separates – tailored jackets, sweats, jeans, pants, leather blouson, shorts, short dresses, sports bras, and parkas – each of these garments can be mixed and worn with many different combinations, a bit like the ‘bourgeois’ Fall 2020 collection but devoid to the sophistication portrayed a year ago.

This Celine collection is actually an ingenuous interpretation of what American Sportswear should be.

A category of easier fashion once championed by American designers as their exclusive territory since the 1950’s to the age of Calvin Klein and Ralph Lauren but a category that American designers have since lost touch with in the strive to become more high fashion designers to compete with their European counterparts.

In this spring collection filmed fashion show in Monaco at the Stade Louis II – the home base stadium of the AS Monaco team – with the mixtures of the multiple facets of the architectures of the Principality namely the Casino Monaco, the Opéra Monte-Carlo, Villa Paloma du Nouveau Musée National, and the Hôtel de Paris Monte-Carlo, earlier this month in October at the end of the Paris show season, the models walked casually around the red running track with an opening look of a cropped black leather jacket paired with a short black tank and short cut loose black jeans and black leather boots that anchored much of the mood of the collection of easy clothes that felt much less a grand statement of ‘fashion’ than just wardrobe staples.

As a practical and rational wardrobe collection, these adaptable clothes included many common items now under the luxury banner that were once the province of streetwear or even the activewear category.

A black with gold patterns print blouson with cropped white sweatshirt and jeans, a khaki dotted long dress with a grey zippered sweatshirt or a white leather jacket with ecru tank and blue jeans. There were even a black logo cycling shorts with a navy hooded sweatshirt and a sleeveless blue denim jacket in a nod to active sports apparel.

Portraying the clothes in a more relaxed ambiance and atmosphere did not mean abandoning the fastidious details – a black fine pleats sparkling silk long dress with satin bow collar, a light yellow strapless short dress with floral fold pattern trims and sleeves, or an elbow sleeve round collar fine pleats dress with tiny sequin decorations. The slouchier jacket like a navy pinstripe paired with a pleated loose above ankle-length pants, the white or navy cropped collarless patch pocket slim jackets worn with denim hot shorts or the brown plaid single breast jacket paired with a navy striped shirt and navy jeans are examples of the exquisite tailoring as central to this mix-match collection but in a way a rejection of the uptight versions of traditional tailoring.

While many large luxury brands discussed how to navigate this new turbulent era, business continued forward at Celine, where these kinds of discussions were totally avoided or even mentioned. Instead, Celine expanded its fashion scope by dividing the coed shows from last season into separate men’s and women’s shows for this spring as creative differentiation needs dictated. It is the same kind of order and discipline Slimane expounded all across the Celine company from the images of the campaigns to the global network of stores that featured the instantly recognizable signature the designer spent time and resources to establish firmly in the mind of the public audience not only the brand’s shoppers.

A bit more grunge and sporty than the usual sartorial elegance defined and associated with luxury fashion, this collection is nevertheless an adroit response to cultural change as well as societal change.

While this show and this collection did not send a loud message about any new revolution about to take place, it actually may be one.