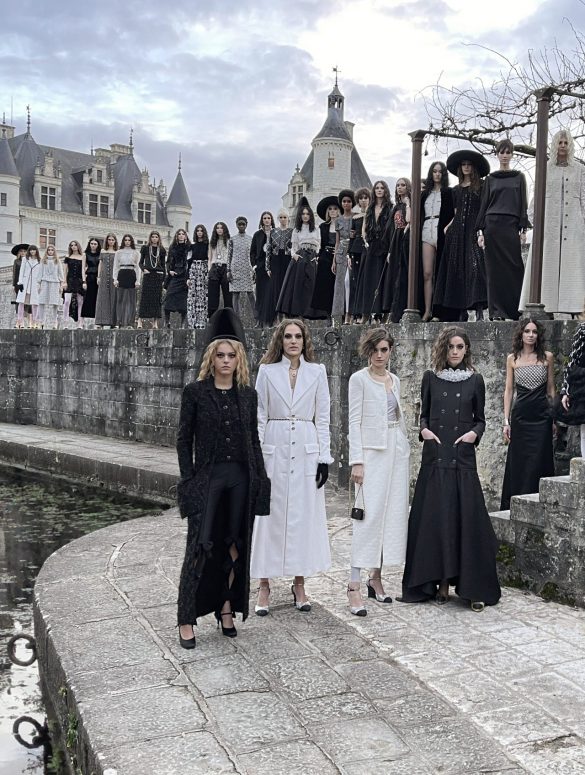 Located in the Loire Valley about two hundred kilometers southwest of Paris in the small village of Chenonceaux, the Château de Chenonceaux was built in the early 16th century with an extension spanning across the river Cher added on in the mid-1550s by the French Renaissance architect Philibert de l’Orme and Jean Buillant, the added structure commissioned by Diane de Poitiers – the mistress of Henry II offered a reflective view of the castle from the surface of the river. The castle is commonly known as Le Château des Dames – The Women’s Castle because of all the famous women proprietors who had single-handedly restored and renovated the property in their own ways – Diane de Poitiers, Catherine de Medici, Louise de Lorraine, Louise Dupin, and Marguerite Pelouze.

Of all these women property owners, Catherine de Medici, the widow of Henry II and regent after he died in 1559, transformed the compound into her residence and added extravagant gardens, the bridge gallery, sumptuous wings, and rooms – one of the galleries with black and white diamond pattern tile was where the Chanel Métiers d’art show took place without a physical audience and filmed for broadcast today. Initially planned with a small number of guests and subsequently canceled due to the second lockdown currently in place, the show was filmed two days prior with just one guest present – the actress Kristen Stewart wearing a black dress with a long pearl necklace sat by herself on a brown wooden bench.

The photographs that Juergen Teller took of the castle’s grounds were printed in a black and white bound book serving as a visual history of the castle with its interior and exterior grandeur. The cloth-bound book of photographs along another smaller book of Teller’s preview shoot is the first time that Teller has shot a Chanel campaign. These cloth bound books provide a tactile feel for the show supplementing the video teasers online before the actual show.

In Teller’s photo book of the castle, he showed the sumptuous ground as well as the natural environment that surrounded the property as well as close-up inside rooms. On the stone marble above the entrance of the castle is the gold-encrusted double reversible CC underneath a gold crown, outside on the path to one of the gardens is a cement rectangle block with the same reversible CC carved into the grey cement now laced with greenish algae, on the mantle is a carved marble of a lion, and on a worn large tapestry is a depiction of another lion. There is also a black lion cast in steel outside in the wooded area. The castle’s grounds are littered with the same shared symbols – the interlocking CC and the lion – representing the past and present not in terms of remaking the past for now but in terms of showing the same idea and the same spirit then and now.

Showing at the Château de Chenonceau, at the ‘Château des Dames’, was an obvious choice. It was designed and lived in by women, including Diane de Poitiers and Catherine de Medici. It is a castle on a human scale. And Catherine de Medici’s emblem was a monogram composed of two intertwined Cs, just like that of Chanel.

These were symbols created by Catherine de Medici, known for her strength and non-conformity to norms. The royal regent preferred riding her horses with her leg on the saddletree rather than on the planchette as was customary at the time. To Medici, this represented her quest for freedom, not grand sweeps in small and meaningful gestures. A booklet of text by Fanny Arama titled D’une renaissance à l’autre (From One Renaissance to Another) compares the similarities of lifestyles the past of Catherine de Medici and Gabrielle Chanel.

Horses also provided a sense of freedom for Gabrielle Chanel. Her first step as a liberated woman was in fact, a ride across Étienne Balsan’s estate in Royallieu. On horseback, a woman is not accountable to anyone. From this intimacy with the equestrian world, she retained an elegant and pure vision of fashion, indeed that it should serve the woman as much as dress her.

“We don’t know if Coco was directly inspired by her, but it is highly likely because she so admired Renaissance women. Her taste for lace ruffs and the aesthetics of certain pieces of her jewelry comes from there. Deep down, this place is part of Chanel’s history. In 1936, Gabrielle Chanel wrote an article on the women of that era: ‘I have always been struck by a strange feeling of sympathy and admiration for the women who lived from Francois I to Louis XIII, perhaps because I find them all to be great, with magnificent simplicity and a majesty imbued with onerous duties,” Viard said.

The Château de Chenonceau, a place where tasteful royal mistresses and wives converged in the past centuries, with its skinny, linear, and long proportions provided the perfect wrapping for this Métiers d’art pre-fall 2021 collection with a range of clothes cut precisely in lean and tall silhouettes, many with ankle-length skirts and coats. Black and white evening dresses were subtle for these times as a great black strapless dress with a long back tail worn with a metallic crusted belt and silver leggings that closed this well-edited show.

There is a whiff of sporty in the brown suede quilted coats for the outdoors. Perhaps something not as expected, a subtle reveal of sexiness in the front side split long skirt showing off the silver leggings and those tweeds bodysuits – a black tweed one-piece with gold buttoning and pocket trim and a sleeveless grey tweed with a collarless jacket.

Created in 2002 as a tribute to the different maisons d’art the artisanal specialty crafts essential to fashion that Chanel has begun to acquire since 1985 with the purchase of the parurier Desrues followed by forty other acquisitions over the years that will see 11 of these maisons gather together in 2021 to a new building 19M located in the northern Paris suburb of Aubervilliers designed by the French architect Rudy Ricciotti.

Many of these artisan houses have worked directly with Gabrielle Chanel. She had hired hardware metal maker Goossens to create jewelry in 1954, shoemaker Massaro to make the bi-color shoe in 1957, and flower-maker Lemarié to create the fabric flower version of the camellia – duties that these houses continue today.

When the supply chain has experienced difficulties due to the pandemic restrictions, Chanel’s ready to wear is primarily made in France. All the artisanal handicrafts specialties, owned by the Chanel subsidiary Paraffection, have been reinforced and consolidated into supplying the French fashion industry with the savoir-faire critical for French fashion luxury, not just Chanel.

Although this collection is a celebration of all the handiwork of the specialty artisans, the clothes never felt over indulged or over-embellished – in fact, the decorations are kept to just the essential.

The bright floral embroideries on a lapel of a white single breast one-button jacket done by the embroiderer Lesage were as light as the sparse garden terrains surrounding the castle. The embroiderer Montex made the black and white short skirts worn with a gold tweed jacket, a black jacket with fur trims, and the black leather tunic that opened the show. The plumassier and florist Lemarié made the black short sleeve lace dress composed of lattices sprinkle with metal studs.

“And a big black hat by Maison Michel, for a look that is very Milady! I also asked the atelier Montex to make embroideries from the castle in the style of a child’s toy in strass. Because I like everything to be mixed up, all the different eras, between the Renaissance and romanticism, between rock and something very girly,” Viard said.

The Chanel codes yield new fruits each season with new fabrics and in especially in this Métiers d’art collection that places a particular focus on the artisanal craftsmanship novel surface decorations expertly hand made by the specialty artisans that this special collection celebrate.

This time a silver or pink stretch bodysuit serves as a base layer suggesting that the clothes can be interchangeable – from the light pink tweed suit with a short jacket with flare sleeves and short skirt to a blue version worn underneath a sleeveless multicolor tweed skirt suit or under a white long wool coat with embroidered sleeves.

Despite the castle location and the exquisite handiwork, the clothes do not feel that they are too precious to be worn – in fact, quite the opposite, these are clothes made for the ranges of women – younger, older, and in between – who can select between an white tweed bodysuit which should be a hit for younger women and perhaps their mothers can choose a grey tweed skirt suit with a small v-neckline or even a red tweed cape with black tweed long jacket and black floral print pants. The castle’s famous tapestries are seen now on mustard intarsia knits from one of the artisan houses Barrie.

This collection aims to channel a timeless spirit in a different era to today with clothes that are easy to wear and less weighty. It isn’t so much of a look back to find inspiration from the past to reinforce the present, but rather about looking for parallel spirits. The black evening dresses towards the end of the show were a tribute to Louise de Lorraine, the wife of King Henry III, who wore only black mourning clothes after learning of her husband’s assassination.

In the few seasons that Viard has commanded the creative direction for fashion at Chanel, her work so far showed restraints in providing any collections that seemed too outlandish or too trendy and veered away from the language of the house. Her shows have been scaled down from the massive undertaking of the Karl Lagerfeld era in the last decade, perhaps fewer constructions of sets and more constructing clothes for real life with shows just with the minimum aid of stagecraft.

That said, there are two new jacket designs in this collection not seen in Viard’s previous shows – a cropped reddish tweed deep v-neck panel front jacket with sleeves coming out from under the panels that draped into the waist and buttoned at the navel and a more severe version as a black/silver tweed jacket with two white trimmed front panels draped over the waist and belted. Both jackets are paired with long print blue and full floral skirts. It’s a subtle placement of new design ideas; nevertheless, they are present.