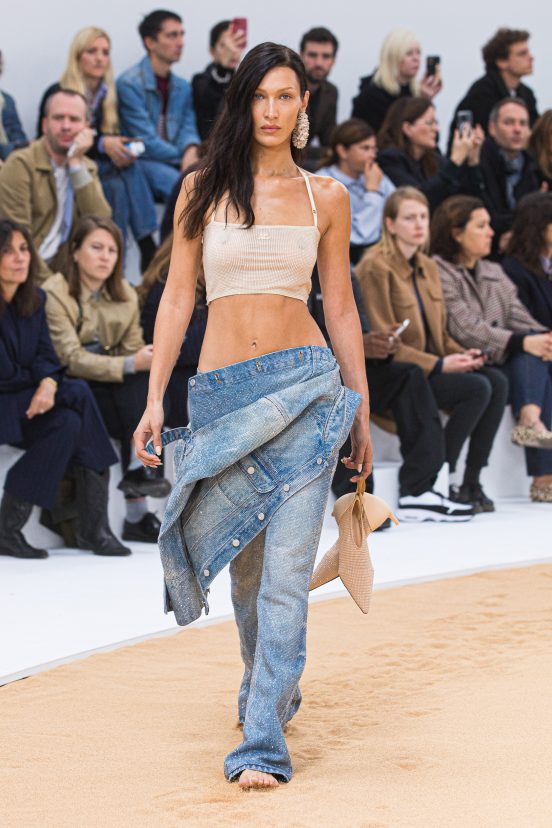 The Courrèges Method for Re-activating Heritage

Parisian designers have really studied the art of knowing how to give good set, as guests at today’s Courrèges show took their seats within the brands ’emblematic’ minimalist white box which housed a circular stage filled with sand, developed by French artist Theo Mercier. Circles within squares, a play on the angular shapes the house is famous for, and once stood as a signifier for their futuristic outlook in the 1960s, gave a soothingly ordered slant to proceedings.

The use of sand could have many meanings here, but given the current climate, it wouldn’t be a stretch to say that – as a stream of sand grains dropped from the ceiling into a well-like hole in the middle of the circular runway – Nicolas Di Felice was thinking of how life can pass us by quickly, especially when measured as grains of sand through an hourglass.

The plasticity of our perception of time, a value exchange between heritage and invention, between time-consuming craft and time-saving technology, inspire

The simple geometry of the silhouettes have been the brands winning formula for decades, coupled with its signature high-shine crinkle leather. But transferring the runway format to a beach-like setting allowed for something softer to come into the mix. This is where we saw Di Felice show his natural flare for twisting and draping, with his mini dresses in white featuring asymmetric shoulder cut-outs and precariously placed slashes that will work in the real world as it could be simply buttoned-up to reveal only a sliver of skin.

The sets beachy ground gave a clue to the water-themed elements which were seen in the form of a spiked silicone material that was used for a mini dress and sleeveless jacket and was reminiscent of the texture of coral habitats found deep in the ocean.

The most exciting category has to be called out as denim, with the deconstruction, surface treatments, and creative cutting that was employed this season, the hard-working staple should remain a part of designer’s lexicon for seasons to come. Here a skirt-cum-jean hybrid with buttons on the inside seam, presumably to allow for the style to be adapted, may be too directional for some, but for the youth-led customer the brand has started to resonate with, this style will work to help them stand apart from their peers still sporting regular 501s.

For many this season, the renewed focus on sexy came with a smattering of shine, some opted for slinky jersey, sequins, or liquid-like lame, and Di Felice didn’t back away from the challenge either. A uniform covering of Swarovski crystals was strewn across denim, doing its Canadian tuxedo duties, but rather than present as another take on the #y2k trend, here the jacket was constructed so as to have a button front and back, which was styled open (at back) and slung low and fastened on the hips of Bella Hadid by a back tab.

Courrèges gabardine and vinyl combines with denim and leather – a neo-heritage, the precise with the raw.

Few have the ability to bring a fashion brand with such a renowned visual identity into a new phase, but with strong themes to anchor himself to each season Nicholas Di Felice Is reinventing the Courrèges brand to face into the the future, while remaining grounded in the now.