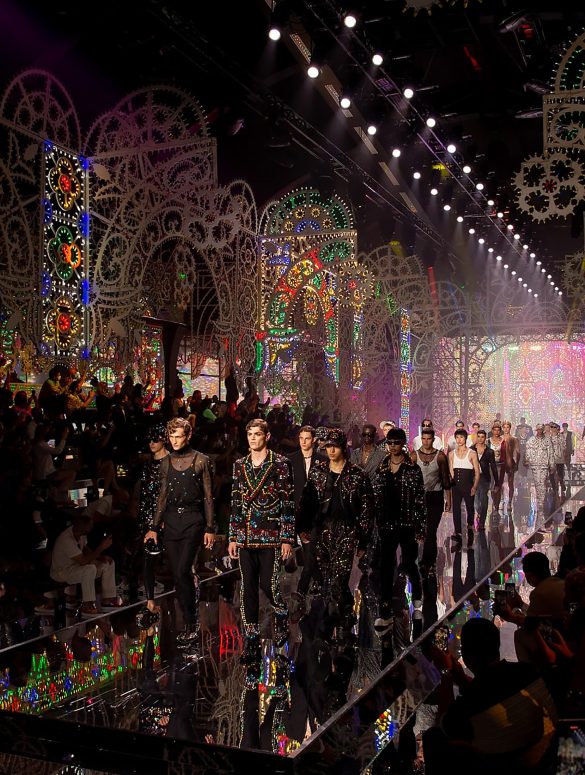 Sparkle and Glamour, Vintage and Renew

Dolce & Gabbana’s Spring 2022 show titled #DGLightTherapy began with a box invitation that contained cardboard with perforated holes that lit up following the instruction to operate on the side of the box.

Then, it was onto the stage of the Metropol, now redecorated everywhere with strings of tiny colored lights, the kind that the designers saw as kids in the south during religious festivities. This Dolce & Gabbana live show was one of three live events with audiences in Milano this season.

The seeds for this Spring 2022 show began over two and a half decades ago, at a moment when the Dolce & Gabbana brand began to break through as a powerhouse in the Milano fashion circuit.

Today, very few working fashion designers have a sufficient and substantial fashion heritage to revisit grandly the way Domenico Dolce and Stefano Gabbana have been doing for the past two seasons in the intentional pivoting of the brand towards a younger generation.

The vast difference is that the design duo looks at their massive archival works and reworks their known silhouettes into new clothes for a different generation. Their Fall 2021 women show in March was a daring example of this taken to extremes by taking a real risk into championing a new way of presenting their collection and the kinds of clothes that may fit the lifestyles of these youngsters. The designers said at the time in March that their fashions are their lives, and the clothes are extensions of themselves.

During the lockdowns, the designer saw an opportunity in seeing how young people thrive on social media throwing the look worn in shows by the likes of Naomi Campbell, Linda Evangelista, Cindy Crawford, and Christy Turlington in the late 1990s and early 2000s into a frenzy sleuth of postings.

In bringing back their signature work foom the decades 1990-2010 timeframe, this Dolce & Gabbana Spring 2002 men’s show brought back the past with its grouping, though the clothes received new treatments.

Design and craftsmanship still stand at the center of this fashion enterprise.

One of the 95 looks was a white tee-shirt with the words ‘A 2000 FASHION MOMENT’ printed in black worn with pink silver silk jacquard pants and pink loafers. A black organza sheer loose tee-shirt with sparkling stone neckline over a black tank with diamanté DG logo and black tuxedo pants recalled the early 2000s ghetto fabulous era. A section of Italian flags celebrating ITALIA recalled those D&G shows before that junior line became part of the principal collection in 2012. And of course, there cannot be a D&G vintage without the leopard, and the tiger prints – these came in a double breast leopard suit and a sparkling three pieces tiger jacquard single breast suit.

Of course, colors and lights mean embroideries and plenty of Swarovski studded garments. A black multicolored studded double breast suit to the light yellow gabardine pants and jackets paired with studded acid wash jeans covered in Swarovskis. These colorful gemstones recalled the Fall 1991 women’s collection of corset dresses, one of which Madonna wore for the New York premiere of Truth or Dare in late May 1991.

The well-known designer patchworks now came in a jacket composed of various fabrics from blue pinstripe to light pink and the black wool gabardine and one jacquard lapel.

Beyond these surface glosses, this men’s spring collection is the essence of the tailoring and cuts developed into the different Dolce & Gabbana tailored shapes. But there was also more subtle reinvention, such as the tight black deep v-neck long sleeve knit with slim pants or the white tank and black pants taken from the very first men’s collection for Fall 1991.

That includes the linear single breast cigarette pantsuit – slight broad shoulders, fitted in the torso – and with the sleeves elongated to cover part of the hand up to the beginning of the fingers. These suiting cuts came in dark purple reflective or gold floral jacquard fabrics or as a splash paint pantsuit. Then there is the Dolce & Gabbana double breast silhouette – a drop shoulder, fitted waist – now in a bright silver pantsuit. Finally, the slouchy yellow and pale blue embroidered jackets at the end of the show marked a move toward more relaxing dressing, showing a bit of an evolution.

This collection is iconic and new at the same time.

The torn denim jacket and matching pants decorated fully with jewel stones and a ribbed cotton white tank top: Love it or hate it, it isn’t for everyone.