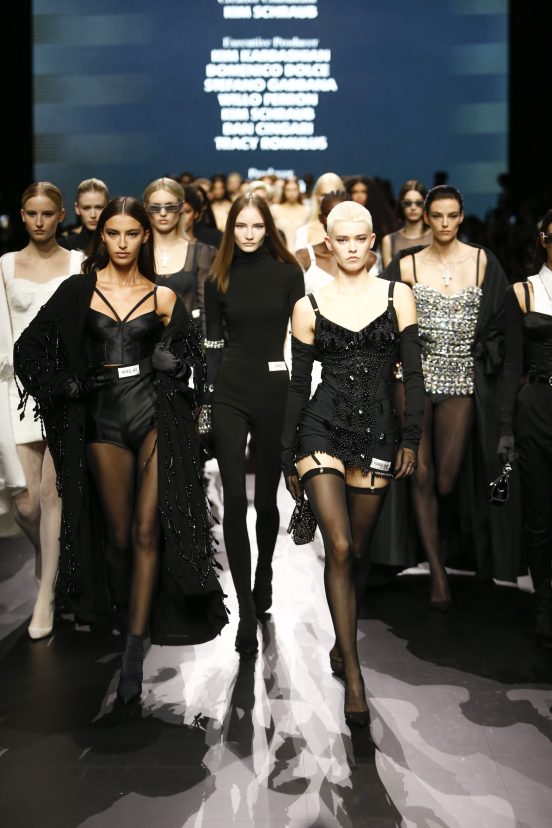 The freneticism, the adulation, and the excitement emulating from the street-deep crowd before the show for D & G were intense. Not to mention the addition of some very angry drivers who could not manoeuvre their cars through the thronging crowd. What does it take to have such a following? One, the brand, and second, Kim Kardashian.

The Dolce & Gabbana duo, Domenico and Stefano, have pioneered their Italian luxury fashion house since 1985. They are known for dressing a woman who simultaneously reveals and conceals brassieres and corsets, lace, lingerie, and veils, and who is disturbing in her impetuous sensuality-a provocative woman proud of her body – soft, round, and full-figured!

Kim Kardashian is in perfect unison with the D & G philosophy, and for now, it just makes sense to have her as a muse.

In the show notes, the duo acknowledges her inspiration. ‘Her confidence, independence, sense of style, and sensuality have served as the leitmotif for this S/S 23 collection in which they also revisited their 90’s and 2000’s archives. This influence appeared as labels printed of the year from which the items were inspired. Is it any small wonder there was such a palpable crowd this afternoon? But it works both ways, with the D & G clothes influencing Kim’s style throughout her life and career.

The show opened with a giant screen projecting a clip of the reality star slowly eating a plate of spaghetti. Background sounds of camera clicks and screams of “We love you, Kim!” blasted over the speakers while the rest of the Kardashian family sat in the front row.

There were carefully constructed fitted jackets cut with that Italian presence, paired with skinny pants or baggy trousers and worn with corsetry details. Sheer mesh gowns were worn to skim the waist with structured corseted bodices, while leopard-printed sets and billowing fur coats made for on-brand D&G drama.

Black, silver, platinum, and ivory spelled luxury in form-fitting pieces that, in their inimitable way, left no room for error, let alone the imagination.

Sheer elongated slips clung to the female forms as a second skin. Transparent, pearlized raincoats allowed for some form of voyeurism, while a long slim tailored skirt involved side seams that gave way to a fabulous split reaching way up to the thigh. Pearlized fringing danced around a body-clinging slip dress while more fabulous interpretations of the bustier followed in quick succession

There were also references to the brand’s archival collections from the ’90s, reimagined with a Kardashian twist. Of note, select pieces were sewn with the years that inspired them: “1999” appears on a pair of pants and “1992” on a jewel-studded catsuit. Accessories included black wraparound sunglasses, long evening gloves and “KIM” adorned chokers. Not to mention the T-Shirt with Kardashian’s image on the front, which has already sold out at 165 dollars a piece!

For the Dolce and Gabbana world, Domenico, Stefano, and Kim brought to life the dream of today’s new woman, exalting feminine beauty in all its forms and expressions: a state of the soul, the attitude and courage that make every woman unique.

This show will be a talking point for some time, but like most that have come before it, it will slip into obscurity until the next femme fatale is invited to join the melee.