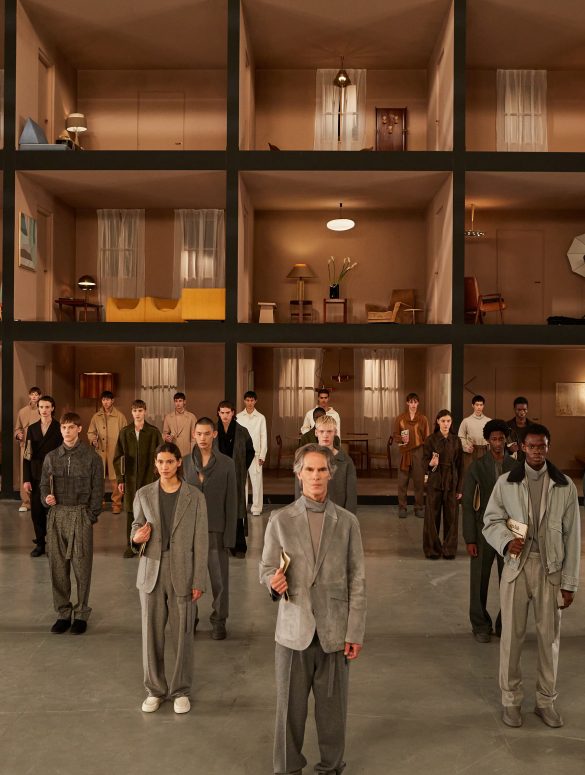 A Sartorial Appeal to the Intellect but Not to the Emotion

The Milano men’s fall season opened with much less fanfare than at any time in the history of men’s shows in Milano this season with a light four-day schedule of digital presentations saved for a few streaming physical shows, principally the most anticipated show of this new men’s season – the debut of Miuccia Prada and Raf Simons men’s fall collection on Sunday afternoon.

The lightness of this Milano men’s fall season isn’t just a result of the pandemic but also a consolidating trend adopted by brands beforehand – namely condensing men’s and women’s shows together with the women’s calendar cycle in mid-February and September. The men’s show calendar seems to have gotten shorter each season despite menswear being a growth category for luxury brands.

Although the Camera della Moda, the Italian fashion federation, is keen on promoting young designers within this framework, the roster of young designers’ showing is not a powerful list of upstarts. That said, the presentation of the duo Nick Fouquet and Federico Curradi was nice with deconstructed looks.

“We are all experiencing a new reality concerned with new needs, which lead us to previously unseen lifestyles and attitudes. It is precisely at a time like this, when everything is under discussion, that we, at Zegna, have decided to (Re)set. We have looked at our roots to (Re)interpret our style codes and (Re)tailor the modern man. Outdoor and indoor come together, and a new way of dressing takes hold, where comfort and style blend to create new aesthetics,” Alessandro Sartori, the artistic director, said of the filmed presentation of the collection appropriately titled The (Re)set (Re)tailoring the Modern Man that mixed black and white and color images of indoor and outdoor with models walking around the various locations that included the super modern Zegna headquarters located in Milano, the campus of the Bocconi University Milano, the Piazza Olivetti in Milano, the commercial center MilanoFiori as well as inside studios.

A model wearing a light brown loose fit polo long sleeve with matching flowy pants opened the mostly monochromatic collection that revolves around the idea of soft tailoring with little need for formality. This is a continuation of the relaxed silhouettes that Sartori championed in the spring 2021 show last July. The new silhouette is the light brown or dark military olive buttonless shawl collar patch pocket unlined and natural unconstructed shoulder jacket belted like a short bathrobe with matching pants, a look that epitomizes the total breakdown of formality. The extreme softness of these tailored slouchy shapes – two buttons double felt wool single breast suits, four buttons collared Mao suits, bathrobe belted coats, or a chocolate two-button large pocket suit that looks as soft as a pajama highlighted the thrust of this highly crafted fall collection meant to ease the rigors of tailoring destined towards a new consumer for the post-pandemic era.

The expert artisanal craftsmanship at Zegna creates the fabrics, and then the actual clothes are unrivaled and demonstrated here in subtle ways.

The loose pants are cut so precisely that the crease on the front and back to the pants in each look balanced the proportions on each side of the models’ legs as they walked in these pantsuits, polo suits, or the bath coats, giving both the allusion of structure within the framework of these relaxed and baggy silhouettes.

It is also interesting to note how Zegna is incorporating new technology into the brand’s products. Just below the space to view this fall video is a demonstration of the easy to pack-easy to wear The Modern wardrobe concept video at Zegna.com showing a video of how to fold a black single breast jacket and put it into a zipper rectangular nylon bag while at the same time trying to avoid the potential for wrinkles. Adopting and incorporating new technology into products is a means for Zegna to reach out to the new consumer, the young people who will dominate luxury spending by 2025.

Can Zegna deliver this new fashion message and ethos to this young generation without so much of an attempt at conversing and engaging them in more ways than just showing a series of great tailored cuts in impeccable fabrics?

This fall show has absolutely all the condiments and the flawless accouterments – the modern location, the ultra-luxury fabrics, the superb tailoring. Sartori’s design skills combine with the Zegna company’s unrivaled craftsmanship with a long history of artisanal production created all these superb clothes.

Yet, the show felt very academic and distant, like a tenured professor lecturing about clothes to an audience who tuned into other stations or watched something else on their mobile devices. Today, it is about creating a community with these young kids and sharing the same values with them. At times, as well, the clothes felt too precious to touch.

Perhaps more than anything else, what is needed here is fostering non-fashion connections and critically emotional connections. Young people respond to these emotional bonds.

In the late 1990s, when Raf Simons first introduced fine tailoring to young men, Simons did so by enveloping his slim suits with all the accouterments he borrowed from his intended audience – their looks, their community, their typical wardrobe, their music, their hobbies – to offer that his tailoring suggestions with the more familiar symbols and vocabularies of this young generation of guys coming of age in the later stages of high school adopting a new sense of aesthetics and a new sense of belonging.

For his shows in Paris at the time – like the Spring 1998 ‘Black Palms,’ Simons cast these youths in and around Antwerp and put them on a bus to Paris for the show. The young audience would actually see themselves and hear their music from these shows – it simply could not have gotten anymore authentic. His debut show for fall 1997 was titled ‘American college students and English schoolboys with a background of New Wave and punk’ according to the catalog left on the wooden benches for guests at the show.

Hedi Slimane, the grandmaster of tailoring, deployed the resources of Dior and the craft of the French couture house to capture and to educate the youth, Slimane’s youths to be exact, during his seven years tenure at Dior Homme in the early aught, primarily with his excursions into the youth underground new wave, new punk, and new rock music groupies in London and Berlin. Slimane dove deeply into how these kids lived in their environment and invited them to participate in his fashion vision through making and performing music for his shows, or even a few ventured onto the runway. Slimane cast his show models to look like they just came from or on their way to an underground performance.

Musicians like Pete Doherty, the singer of the indie rock band The Libertines, made music for the shows and photographed by Slimane in art books like the monograph ‘London Birth of a Cult’. The French rockers Phoenix did the soundtrack for the fall-winter 2005 show, and the London art-rock band These New Puritans wrote new songs and performed the soundtrack for the Fall-Winter 2007 runway show. Slimane connects to the young generation with music rather than with the finer points of a skinny pant suit’s intricate cuts.

Both Simons and Slimane ingenuously connected with their audience not through the technical knowledge and appreciation of craftsmanship but with an emotional channel through music and through investing in youth communities so that young people can identify themselves and perhaps then identify themselves in the kind of clothes that the designers created for their brands.

Sartori and Zegna have to engage the youth audience on an emotional level, soon, rather than just making pleas to the intellect.