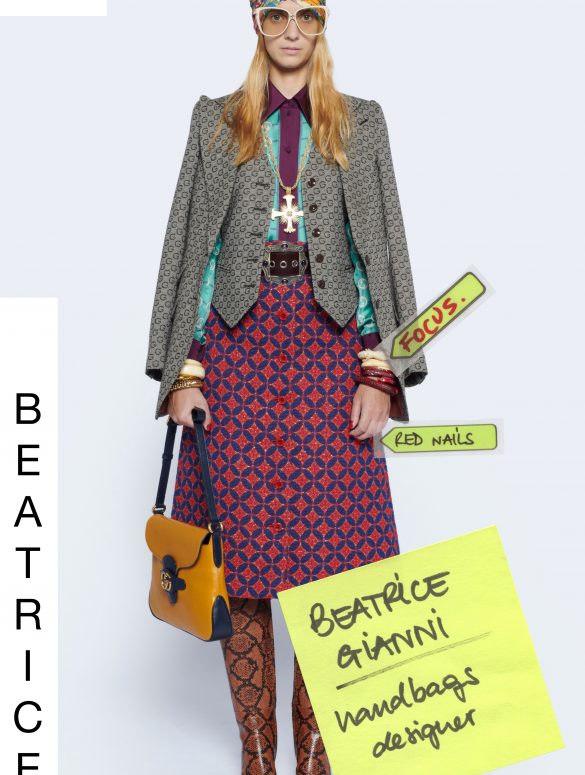 All was still dead quiet just a few minutes past 5 AM on this cloudy Friday morning.

That was surely not the case on the other side of the Atlantic in Rome at the Palazzo Sacchetti, a mid-sixteenth-century Renaissance building built by Antonio da Sangallo the Younger and fully decorated with frescoes and paintings and stuccoes with high ceilings, some in the Italian mannerist style of artists like Francesco Salviati who painted the series ‘Story of David’. The global audience elsewhere was tuning in to a 12 hour broadcast at the Gucci home website, where cameras placed throughout the venue provided a voyeuristic glimpse at the action. The sounds of footsteps on the old wooden floors from different groups of people interrupted the quiet beauty of the palace’s sumptuous halls and the lush green gardens.

Prior to the actual start time, viewers were treated to backstage scenes of preparation – a model sitting in a white bathrobe for hair and makeup and a model being photographed formally by a team wearing a floral printed top, long patchwork polka-dotted silk black and white pleated skirt, and silver leather elbow gloves. At one point, she was holding on to a giant orange carrot before being given an umbrella by an assistant, signaling a small break. About 45 minutes later she was again posing on a sofa with a large photography team surrounding her, all wearing facemasks and a few also with face shields.

The camera then switched to a guy being prepared – he wore a deep green velvet bathrobe with red embroideries and gold-toned leather sneaker. At 7:30 AM, the same guy in the green coat had now moved into a larger room standing next to one of the globes by Vincenzo Coronelli. Meanwhile, outside in the garden, two guys were jumping on a round trampoline – one wearing a deep green suit and the other in a cropped shredded trimmed denim jacket and yellow and black printed short sleeve shirt and matching shorts.

These were scenes live-streamed from a 12-hour live broadcast of the making of the Gucci campaign for later this fall, being photographed by the American photographer Alec Soth with videos directed by the brothers Damiano and Fabio D’Innocenzo.

A computer voice interrupted the streaming to introduce the main event as images of looks from the new collection came alive with split screens images of each outfit in stills and in movement.

“Finally, the epilogue comes, to seal the closure of a trilogy of love. This last movement goes around another short-circuit. The clothes will be worn by those who created them. The designers with whom I share the daze of creation will become the performers of a new story. They will seize the poetry they contribute to mold. They will stage what we passionately imagined,” said Alessandro Michele, the creative director, of the three parts of a tale that began in February with a backstage staging of the show and to an ad campaign shoot where he gave others unprecedented freedom on set to create the photos.

Oh, remember that guy in that green embroidered velvet trench that initially looked like a bathrobe with gold sneakers getting prepped for a shot seen via streaming earlier? His name is Luca Loviento, a women’s ready to wear designer, and he has on a nude turtleneck (not naked). Francesca Fabrizio, a fabric researcher for women’s and kids’ ready to wear is the girl holding the giant faux carrot in a floral printed blouse and pleated zig-zag pleated long skirt and silver gloves.

The two guys on the trampoline, one in the denim and printed floral shirt-short and the other in a green suit are Junayo Salimo, men’s ready to wear product assistant, and Shane Wilson, a women’s ready to wear designer.  His green suit with vest and cropped ankle flared pants is actually a full logo single-breasted suit with black wool trim. I was waiting for them to actually jump around on the round the trampoline but that did not seem to have happened or else I missed the action. Three hours later I saw Salimo looking at a set of ‘polaroids’ on a whiteboard.

The shapes of the clothes are very much like the shapes of real life people who are wearing them here – the very diverse range of employees shown – and who will wear them globally later this year with jackets and coats ranging from slim to relaxed to pretty boxy. A tailored brownish-grey jacquard slim jacket and knee-length flared printed skirt, brown plaid loose coat or pinkish jacket with open sleeves, black and white tartan baseball blouson and wool dress, A-line floral printed long dress, or a large logo printed black and red coat and cotton floral dress are the various manifestations of this focused collection.

At times the kaleidoscopic mixture of clashing prints and colors and fabrics all in one look seemed discordant but there’s logic. A few times pictures of vegetables of various sorts and conditions are inserted between the frames of the lookbook roll-out: look 46 is juxtaposed to an image of brown dried-out peas on the right side, and look 53 is paired with fresh green beans. ‘Vegetables as grown in nature: purest imperfect forms.’ – a statement that flashed on the brand’s Instagram suggests that while the combinations may seem imperfect, they are in a way perhaps the right clothes chosen by those who wore them. It is not hard to believe any of these real people wearing these clothes – in a way they are very much part of each other.

To add a bit of humor, the person who announced the order of appearance of each look seemed to have missed or deliberately missed on numerous occasions the actual order or did not even care, saying look 13 instead of actual look 73.

The styles presented are pretty much, well, Gucci.

Looking at the clothes, some may say the style is repetitive – that Michele has not changed a great deal since his debut in 2015 but that may precisely miss the point. No one really said that about the classic Chanel suit or the Dior Bar silhouette – very specific clothes that see new fabrics and at times some tampering each season like hitting a refresh button and seeing them in a new version. That is the meaning of creating a strong and identifiable signature. Fashion today is what art was in the renaissance – a topic of cultural and societal conversation and community now as it was then.

The images from today’s fashion provide the pictorial landscape and in the same manner are just the like the frescoes decorating this Palazzo, recording the people and the tempo of a particular time even if the visuals themselves showed the thinking and the social climates instead of actual people. Now, fashion creates the myths and the stories we tell to successive generations. In choosing to create the brand’s images within the walls of this Renaissance building graced with nothing short of monumental artworks depicting the heroics of David for instance, Gucci is putting itself at the center as a creator and a curator of culture where Renaissance arts inspire a piece of clothing.

Just as important, the sharing of this creative process invites the audience and consumers to partake in the making – it is seeding the new Gucci DNA at the roots of the house’s creativity so that everyone feels they all can participate and above all partake in all of these processes, instead of just clicking at the checkout basket a few months from now when these clothes, shoes, bags and new makeup colors arrive on and offline.

Community across time to build community today – where one culture informs another and where one person educates another.

Culture now is a dynamic of evolving interrogation of not just phantom hierarchies but an actual challenge to established power and societal structures as seen in the recent BLM protests, initiating a far-reaching conversation and conversion to new thinking and a new way of working everywhere and in fashion in particular.  Being in tune with the generational shift will Gucci ascertain the behaviors, the values, and the desires of new consumers, or as Michele mentions the “deposited new questions and [how they] stirred things up, producing new intuitions.”

Making a creative cultural moment and not a fashion moment is how Gucci navigates this future environment today as fashion images now become a visual capture of culture at large. Broadcasting the actual ad campaign shoot provides transparency – a crucial value now – by opening up venues for dialogues between Gucci and people and consumers. For those who tuned in over the half-day broadcast and wondered why at times nothing was going on, that’s how the process of creating pictures works. For anyone familiar with editorial or ad photo shoots, there are many moments when not much is going on at all just in the exact way the actions in this live-stream broadcast were revealed.

‘Epilogue’ is the end of a cycle and the start of another in the ongoing process of experimentation that is at the heart of fashion and Gucci.