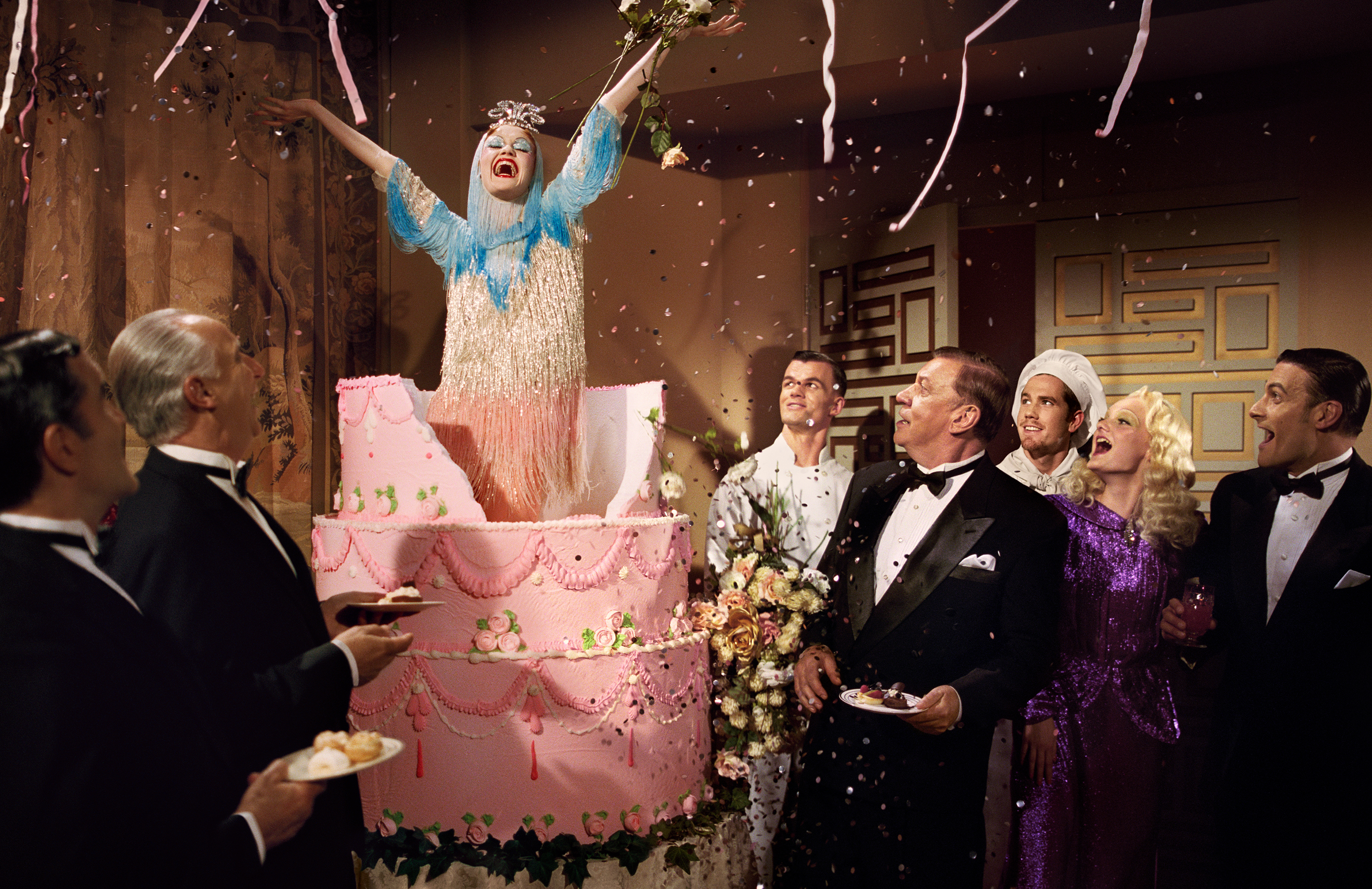 As if the boundaries between fashion and show business haven’t been blurry enough, the team at Gucci weighs in where they stand with the most dramatic Spring 2019 ad campaign of the season, entitled Showtime, an ode by Creative Director Alessandro Michele to the golden age of the Hollywood musical.

The team of Christopher Simmonds and photographer/director Glen Luchford reunite to celebrate the beginnings of celebrity culture producing an over-the-top film, black and white publicity stills, interviews on the red carpet, and campaign stills.

The campaign burst with the exuberance of the song and dance numbers made famous by the famous musical films of the 40s and 50s with each frame is complete with grandiose stages and colorful props. As short narrative is built around a director guiding actors through the process to make a film on al old Hollywood soundstage full of extras and stage hands.

The campaign is well thought out and full of layers. Including a set of photographs, were Gucci mimics the highly stylised black and white publicity stills created by the studios at the time to promote their stars. A variety of characters from Gucci’s musical are given the silver screen treatment and shot in black and white with dramatic lighting in the style of the many famous movie star portraits in the 30s and 40s.

The film also pays homage to this famous genre as we see characters dressed in Gucci tap dance, sing and perform synchronised dance routines reminiscent of the work of the exuberant musical choreography of that time. The soundtrack is “There’s No Business Like Show Business”, the song by Irving Berlin written for the musical Annie Get Your Gun and made famous by Ethel Merman in the film of the same name There’s No Business Like Show Business.

After an in film ‘intermission,’ we glimpse candid moments where the film crew and mechanics of the set are revealed as the camera pans away from the action, creating a “behind the scenes” element that wryly references the fact that Hollywood musicals were often about show business itself. These scenes allow us to see other characters, such as producers and and give us a glimpse of the eclectic, extended Gucci cast that has come together to put on this epic production.

Characters of the campaign also appear in a series of videos where they are interviewed on the red carpet at an imaginary premiere of Gucci’s musical. They are quizzed about themselves and their outfits as they make their way into the screening.

The result is a fully conceptualized ad campaign that has all of the elements of a blockbuster and enough ‘high kicks’ and legs to help market the house over the course of the season. The photography and directing are stellar and the permission from the house as the ‘Producer’ of the show to push the ideas to the limit is admirable.

Gucci recognizes they are in the entertainment business as much as product development. And like Bob Fosse, wake up daily to splash water on their face and exclaim, “It’s Showtime, Folks!”