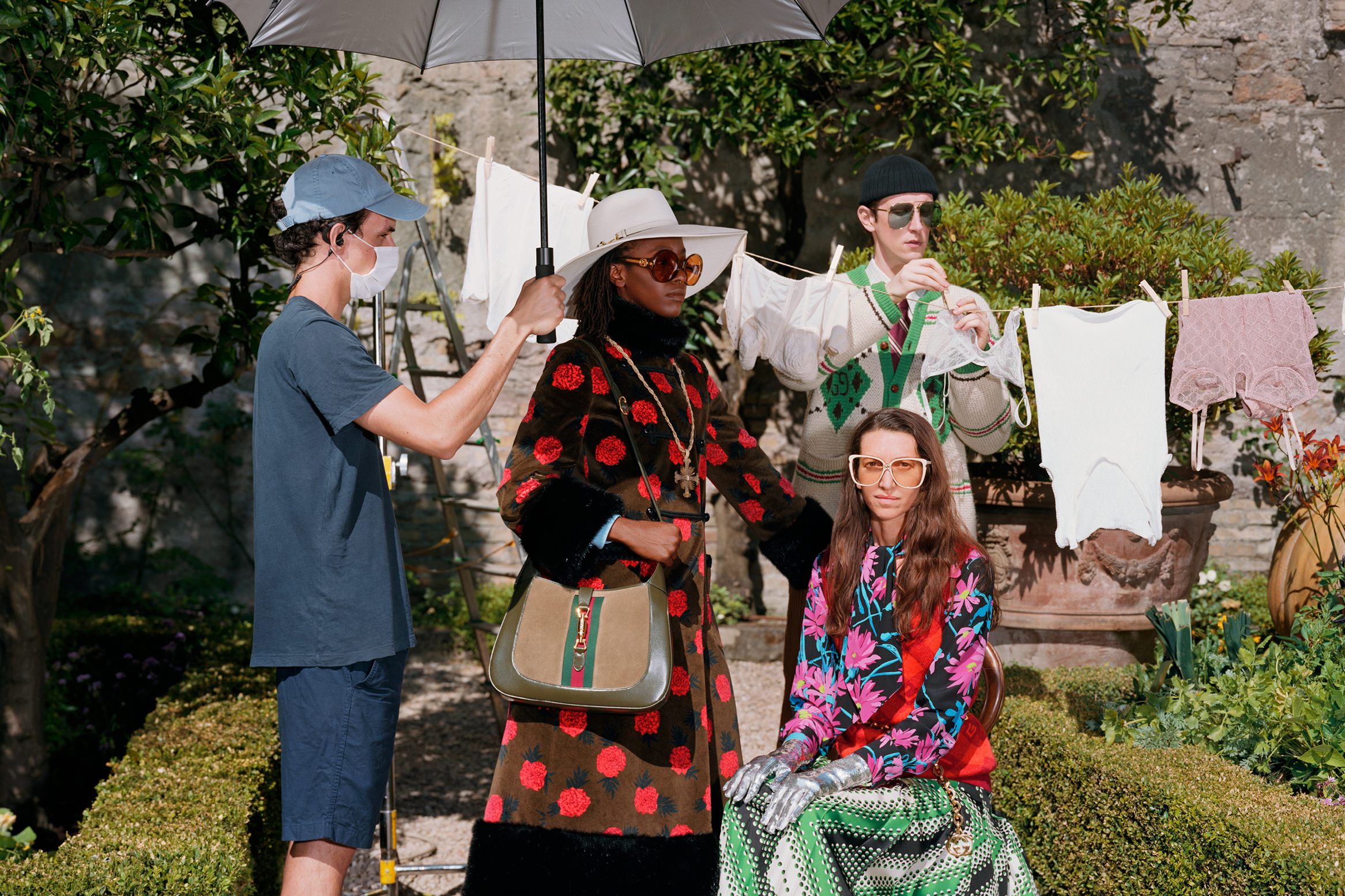 Gucci puts a fitting end to a brilliant run of campaigns with “The Epilogue.” With a cast made up of the people who worked alongside him to create the collection, Alessandro Michele concludes his “The Ritual” show and campaign series began in February.

Beginning with his Fall 2020 show in February, which brought the backstage process to center stage, Michele sought through the lens of “The Ritual” to explore and subvert ideas of influence, imitation, repetition, and pretension. In “The Epilogue,” he caps it all off with moments of reflectiveness and conclusion.

I brought together different things, which represent the messy beauty that I have always sought: the chaos of beauty. What happens to the relation between reality and fiction when prying eyes sneak into the mechanisms of the production of an image? What happens to fashion, when the true goes back to being just a moment of the false? Breaking the spell that forces my collaborators to passionately work on clothes they later have to abandon, I asked the team to wear them. And so we did a self-sufficient job, all inside our house, mixing things we had already done with things we were about to – overcoming the schemes of the time coherently with my idea of The Epilogue, the final resolution of a future that is largely present.

As with the digital presentation of his collection in July, Michele once again recruits members of his own creative team to work as models and the tactic that continues to pay off for him. Photographer Alec Soth captures them in Rome’s two contrasting locations, the grandiose Palazzo Sachetti, and the overgrown and graffiti-covered Campo Boario. Soth finds moments of disordered beauty and contrasted harmony. Beautiful floral patterns bloom against aged wood paneling or crumbling concrete. In a deconstructionist touch, crew members and production equipment appear in almost all of the shots. Meanwhile, farm animals wander in and out of the frame, and harvest vegetables form an important motif, a nod to the season, and a celebration of the year’s growth and achievement.

Created by Roman directors Damiano and Fabio D’Innocenzo, winners of the 2020 Berlin International Film Festival’s Silver Bear for Best Screenplay, the film explores the surreally intersecting lives of these eclectic characters. They tend to their urban farming project or lounge in the palazzo while a boppy Italian new-wave track plays. Once again, they are watched over by the production crew, causing us to question the reality of the image and the creator’s role.

By layering in the final reflective twists of the in-house cast and the blurred distinction between production and final product, he has created a final chapter that beautifully encapsulates all he first set out to do.

The tensions of decadence and vitality, old and new, chaos and order, fantasy and reality, are all once again expressed and expressed gorgeously, with an added layer of self-reference that affirms and furthers the ideas behind these aesthetic themes. While this ritual has found its epilogue, Gucci shows us that the ritual of creation, of creativity, of life, continues.