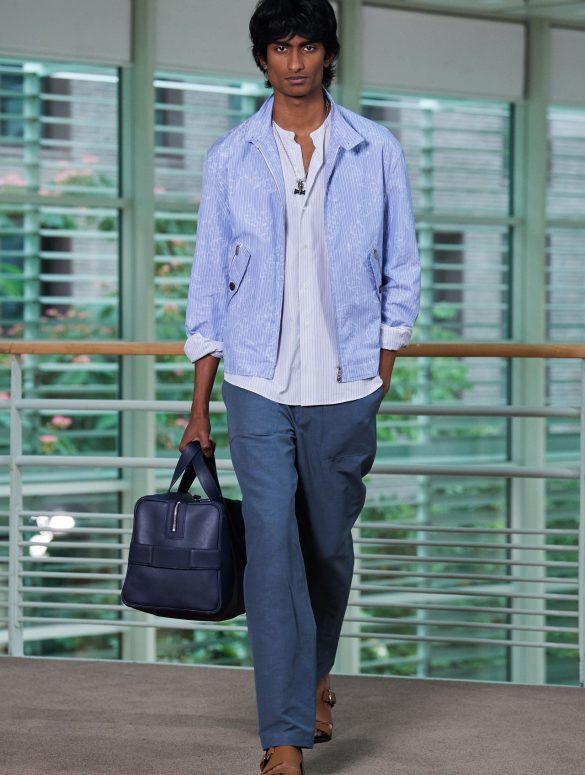 On Sunday afternoon, Hermès took the lead in the Paris digital show programs, starting with Haute Couture on Monday and continued with menswear until next Monday, to wrap up the fall winter 2020-2021 and spring summer 2021 season with a live performance broadcast from one of its atelier in Pantin. The live stream featured models, staff, and filmmakers – none sporting any facial masks, that acted as a bridge from runway to film. Performance art while keeping the central focus on the actual clothes.

The writing of an image as expressed over time and the crafting of specialized cloths into each season’s precise shapes is central to the work of creative director Véronique Nichanian.

The element of time – or more precisely of timeless quality – each act as another invention within this language of craftsmanship skills.

Nicely done was the way Hermès chose French playwright/director Cyril Teste, known for his pioneering “filmic performance” productions. In tandem with Nichanian, Teste captured the clothes and the essence of Hermès – fabrics, innovation, and shapes – all difficult to convey in a nonchalant manner but one he does in the live performance with grace and fluidity.

Art aside, the clothes never veered too far from being the central focus especially in moments where Nichanian directed the videographer to point the camera closer to the surface of the stripes and then asked to move back to show a full length of the look so the audience can perceive the silhouettes of her cut for this season.

One season alligator skin was made so soft as to have to the look and feel of embossed satin or hand tie-dyed suede.

At Hermès, any collaboration is the purposeful meeting of the minds and of merging different thinking to invent a new way of looking.

The filming of the backstage preparation was not a depiction of the frantic moments to get the models readied to exit onto the runway but a calm and reflective atmosphere reflected in the soft unconstructed silhouettes of straight jackets with double fronts and shirting with playful mixes of the hues of pale blue, almond green and stone stripes on stripes and soft printed goatskin blousons with removable collars.

The live stream piece felt light on the art side as expectations were high for a theatrical piece by a director known for mixing different medias to create an art moment.  It would probably need to tell a more compelling story, even a short one rather than a straight forward backstage piece, and also leverage many of the Teste’s techniques that were absent or not made prominent.

But this performance, while not as artistic as it should have been, was uplifting and the applause at the end showed heart as Hermès is doing Hermès, and that is something to cheer for.