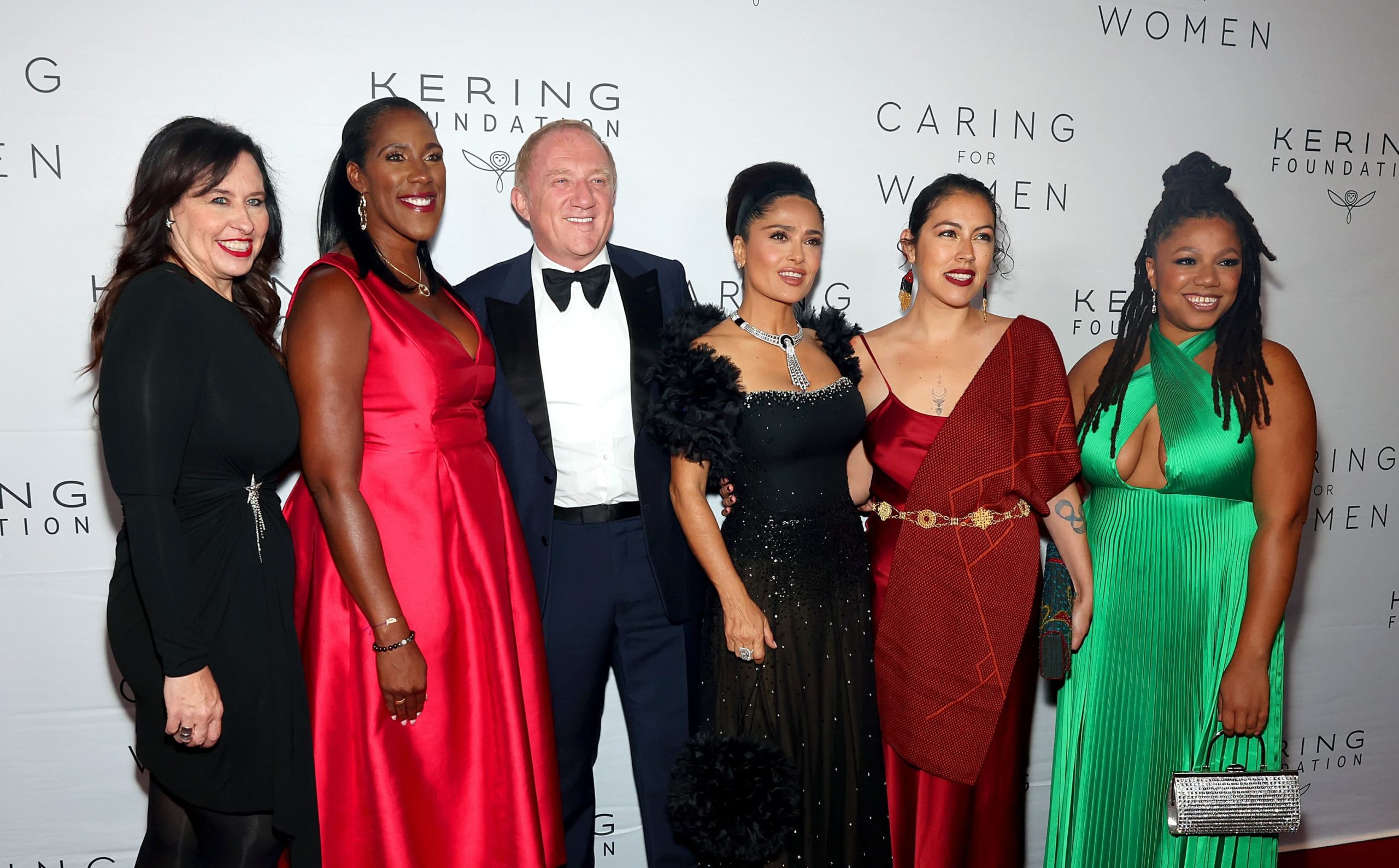 Since 2008, the Kering Foundation has worked to combat violence against women by supporting survivors to live free from violence, changing behaviors and attitudes to break the cycle of violence and taking collective action to stand against violence. The Foundation funds local NGOs to provide support and resources to women and those directly impacted by violence.

Anderson Cooper kicked off the evening by noting that gender-based violence happens everywhere, citing his experiences reporting from around the world. “I’ve seen sexual violence used as a weapon of war when I was reporting in the Congo. We hear it in the devastating stories coming out of Ukraine today. It is everywhere, and it touches everyone,” Cooper said.

Her Majesty Queen Rania, founder of the Jordan River Foundation, took the stage to emphasize the urgency of the Kering Foundation’s core mission. “Sadly, crises are not gender-neutral,” she began. “Today, we live in a world where seismic disruptions have become the norm…from pandemics, to climate change, to mass migration, to conflict and shifting geopolitics. And women and girls are always the first to feel the ground shift under their feet. They are the first to suffer and the last to recover, their agony underground and in the shadows.”

Chairman and Chief Executive Officer of Kering and Chairman of the Kering Foundation François-Henri Pinault urged everyone in the room to join forces to address the threat of gender-based violence. “Progress comes when more and more voices come together to say, ‘This cannot stand. This must change. This is unacceptable,’” Pinault said. He also highlighted the need for men to speak up in support of women: “We have not yet reached that critical mass of male voices who speak out against violence. So this must become our priority, along with our support to survivors. This can and should be a defining era for men’s solidarity with women. Violence against women was never just a “woman’s issue” – it is everyone’s issue. It affects every life.”

Kiesha Preston, a domestic violence survivor and activist, shared her personal experience and how she benefited from NNEDV, one of the Kering Foundation’s partner organizations. “Six years ago I never could have imagined I’d be standing in this room, wearing this fancy dress, and speaking to all of you, because I was in a relationship that broke my spirit, and left me feeling incredibly small,” Preston said. “Ninety-nine percent of domestic violence victims experience some form of financial abuse. I felt a responsibility to make sure that what happened to me didn’t happen to anyone else.” Preston went on to write the Virginia Domestic Violence Victims Protection Act to protect survivors of abuse from being denied housing due to poor credit ratings, and spoke at a Congressional briefing on violence against women. “It was the free counseling services and support I received…that helped me re-discover [my] power and confidence.”

The evening included a live auction led by Lydia Fenet of Christie’s to raise funds for the four beneficiary organizations, featuring a variety of items and experiences donated by Kering’s Houses including: the quintessential Cannes Film Festival red carpet experience from Kering; a three-city tour of Gucci fashion spanning Milan, Florence and Rome including a made-to-order appointment for a custom Gucci look; a sculpture by artist Helmut Lang in collaboration with Anthony Vaccarello from Saint Laurent; a special edition armchair prototype designed by famed architect Mario Bellini from Bottega Veneta; a couture fitting experience from Balenciaga; museum-worthy armadillo boots from Alexander McQueen; a pair of bespoke evening jackets from Brioni; a private apartment stay and workshop visit from Boucheron; and a customized jewelry experience in Milan from Pomellato.

Actress and Kering Foundation Board Member Salma Hayek Pinault thanked the audience for a successful night, expressing her determination to continue the tradition. “We’ve come together to create a family…a community…a movement that says violence against women must stop. I know that it will. Because I feel the power in this room,” Hayek Pinault said. “This is the dream. You are making it happen. And it doesn’t stop here.”

The evening ended with a performance by Grammy Award-winning singer-songwriter and Golden Globe Award-winning actress, Andra Day. She opened with a rendition of Billie Holiday’s “God Bless the Child,” followed by “Tigress & Tweed,” an original song from the motion picture “The United States Vs. Billie Holiday,” in which she played Holiday. Day closed out the evening with a moving performance of her hit song, “Rise Up.”

The Caring for Women Dinner was produced by JWP — Josh Wood & Mimi Eayrs.