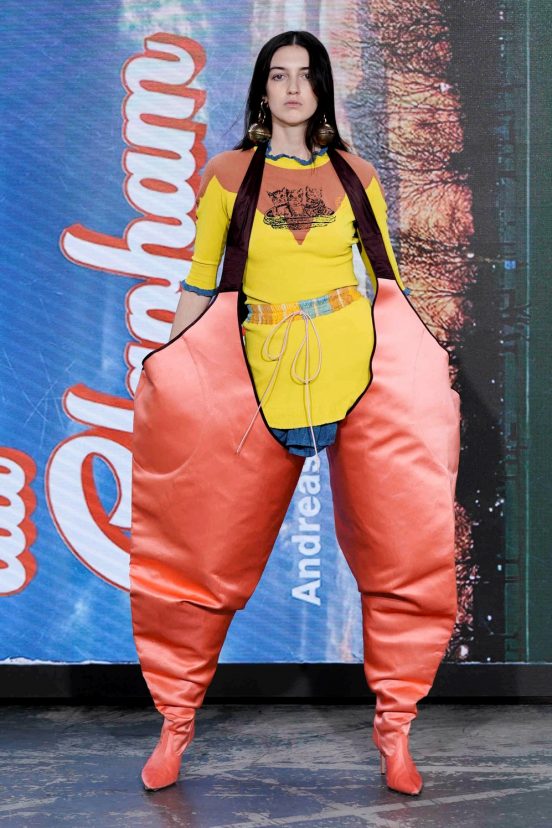 When I was 18 years old, studying fashion in London, my friend Nick and I were so desperate to see a Vivienne Westwood show that we hid in a toilet under her show venue for four hours in the pitch black. Once the music kicked off (and we’d worked out how to divert the backstage security), we ran out into where the audience was seated to watch the show – and schmooze at the aftershow party. Over a decade later, I find myself seated next to the Prince of Arabia on the ‘frow’ – and – while the above story crosses my mind, a big smile widens across my face, as I think to myself, “Westwood is why I wanted to work in fashion.” And Nick? Well, he’s a tailor on Saville Row. But half of me always expects to see him dart out a side door at every show with a mischevous look upon his face.

Although now no longer in the solo hands of Westwood herself, her husband, Andreas Kronthaler, continues to provide me with the same kick that makes me want to commit petty crimes.

The Westwood silhouette is unmistakable; womanly, voluptuous, historic, contoured. Today’s looks offered all of that and more. Kronthaler repeatedly played with the square as a motif, seen across strong shoulders, sharp bodices, angular boots and, well, giant squares.

Colour and material had a ‘throw anything at the wall’ vibe. That’s because they quite literally used anything they had to hand, the designer opting to re-use deadstock from their stock cupboard in a bid to reinforce the Westwood sustainability ethos.

The results made for unexpected and nostalgic twists, catching glimmers of previous season’s stories woven throughout looks. You can see people lapping up the two-tone t-shirt dresses, silk scarf dresses and draped asymmetric tops, each one as unique as the next. Luckily for the brand, that patched-and-pieced aesthetic is very much in. Quite how you interpret that look en masse is another point, but perhaps that’s the anti-consumerist angle of the brand in action.

A plethora of references filled the room; grunge, punk, Victoriana, medieval, athleisure, disco and a touch of S&M seen amidst candy colour latexes and heavy chain jewelry. Not seen in the photos; backs of blazers that came ruched or corseted at the back, or shorts and trousers that had sections torn away to reveal flashes of buttock – cheeky. Glitter boots met baseball tees, boulcé knits danced alongside giant cowbells.

Amidst the chaos, more commercial shapes like a tiered black shirt dress or power-shouldered shirt managed to echo the Westwood heritage with a new kind of modernity.

Accessories (the brand’s moneymaker) were out in full force, with something for everyone. For the die-hard fans, Westwood’s orb came supersized and studded with diamante. For the youth, baseball claps complete with pearl applique or badges. Elsewhere, pearl-laden earrings looked decedent (if a little heavy.) Eyewear was a particular highlight – shapes framed with sea shells, sparkle and disco-ready chainmail.

To underpin the collection’s sense of ‘something-for-everyone,’ a stellar lineup of models walked the show, spanning all ages, body sizes and genders.

Diversity is something (alongside sustainability) that Westwood has always championed. Her clothes, in essence, are timeless and looked just as special to me today as they did to that super-fan fashion student over ten years ago.

Dedicated to Nick Sen – here’s to another decade of high fashion adventures.