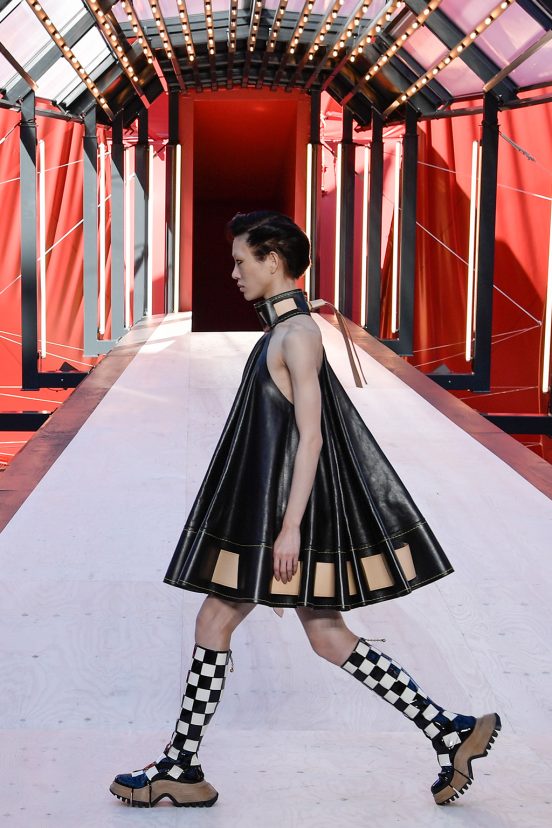 Roll Up, Roll Up, for the Louis Vuitton Show

On the last day of fashions ‘Back-to-school’ season, and a successful post-pandemic run that was disrupted only by the death of Queen Elizabeth II during London’s fashion week, Paris fashion week concluded with a grand display of drama.  In a teaser post on social media it was shared that the show would once again take place at the Musée du Louvre’s Cour Carrée with a set which mimicked that of a travelling circus designed by Philippe Parreno.

The spring-summer 2023 women’s collection zooms in on the details, highlights them, gives them their due.

The choice of theme for the set, in the hands of Nicholas Ghesquière was always going to be a creatively deconstructed spectacle, and while physically it was an emotive sight, there was also a message within the visuals, namely how the format is one of a fleeting nature, considering that most shows last a mere 12 minutes at most. Yet their lasting impact is palpable.

The summer 2023 collection spoke to femininity in all its complexities, manifesting itself in a play on proportions, which were so extreme in some cases, they came second to the clothes.   Tubular structures encased models’ necks, shoulders, and hips and took on an otherworldly sci-fi quality, while feathered and embellished mini dresses were toughened-up with crafted leather neckline trims.

The major talking point of the show is sure to be the extreme versions of humble trims. As a way to magnify these details and put them in the spotlight, the designer took to turning up the volume tenfold on zippers, press studs, and buckles. This new way of approaching such humble details – which are a signature of the brand DNA – was the designers way to unsettle the codes femininity and invite a second look.

Possessing a particular skill of mixing fabric, and texture, with directional design details (as well as producing market-leading handbags) is what makes Ghesquière so attuned to the Louis Vuitton brand, and having been confirmed as staying on at the house as Creative Director, by Chief Executive Michael Burke – since joining in 2013 – will have surely gone some way to giving the designer a boost in confidence that was evident in today’s show.

Possessing a particular skill of mixing fabric, and texture, with directional design details (as well as producing market-leading handbags) is what makes Ghesquière so attuned to the Louis Vuitton brand

Not many designers possess Ghesquière’s innovative way around a silhouette, which has been instrumental in the designer honing such a distinctive look for the house, and with each season he brings forth varying elements of the unexpected, which in todays climate of ‘bottom-line’ focus, to have the full backing of the C-Suite, is a rare gift.