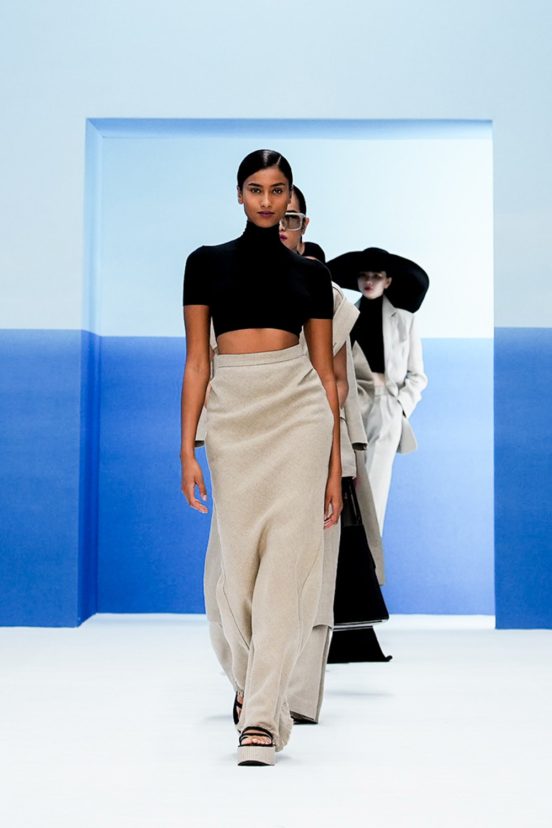 There is something in (and about) the water this season that is inspiring an ease reminiscent of a thousand summers spent along the coast, and next summer Ian Griffiths Max Mara intends to take us on an odyssey of escapism.  A genuine cultural archaeologist, Griffiths often deep dives into a wide range of subjects to inform his work – last season it was social activist and poet Natália Correia – this season his point of reference was a popular series of photographs taken by Jacques-Henri Lartigue of his ‘silent muse’ and lover Renée Perle which epitomised French coastal style.

On sun-soaked beaches, masterpieces were conceived, manifestos thrashed out and a timeless look forged: Riviera style

The silhouettes that this collection will be remembered for, are the almost bulbous volume pants. Because where many a designer would go for more lightweight fabrics to aid movement for the wearer, Griffiths opted for more crafted humble textures which formed a sort of architectural scaffolding around the models. Oversized trenches tapered in by belts, boxy leather shells with gauntlet cuff details that also appeared on a maxi shirt dress, and the brands iconic tailored 101801 coat all carried an ease that chimes in with the designer’s inspiration for summer – The French Riviera.

The use of mid-weight natural fabrics throughout the collection gave this season its modernity. Most notable were the burlap linens – whose form will surely mould over time and get better with age, taking on the unique character of each wearers shape. The linens were also used for the XXL low-slung cross body bags – the new summer tote shape? – and is an opportunity for the brand to develop these accessories as part of a range of environmentally sustainable pieces, being that according to show notes the material is both “unprocessed and undyed”, and the silhouette embeds both functionality and timelessness.

A more youthful choice of fabrication were the washed cotton drill looks, in both ‘Mediterranean blue’ and pistachio offering a cleaner take on the denim-on-denim looks that have been popular of late. This casual alternative will work for the max Mara customer, but also serve to draw in a younger demographic constantly seeking out looks that will create impact on-screen.

Known to embrace a neutral palette, it was no surprise that these tones were fluent throughout, but a mid-section break of ice cream shades – applied in that monochromatic way that the brand nails every season (often imitated, never duplicated) – was as refreshing as a sorbet on a hot summer’s day. Buttery yellows, silvery blues, and pistachio greens were used on a succession of more ‘casual’ looks which will speak to the modern Max Mara woman.  A relaxed bomber paired with a knitted crop top and wide legs runs parallel to the conversations being had about how to dress for work in a world that has moved towards a hybrid- style system – smart but not showy, sharp with a softness added around the edges.

At Max Mara each piece is designed not just to be worn, but to be lived in

A special mention must go to the fishtail skirt silhouette, which will hopefully see a revival of the often-under-utilised shape – rarely ever used outside of the bridal and occasion gown sphere. Here we saw a top-to-toe linen look, where shirt and skirt fluidly melted into one and would be such a welcome departure if a stylist were to be brave enough to send it down an award show red carpet.