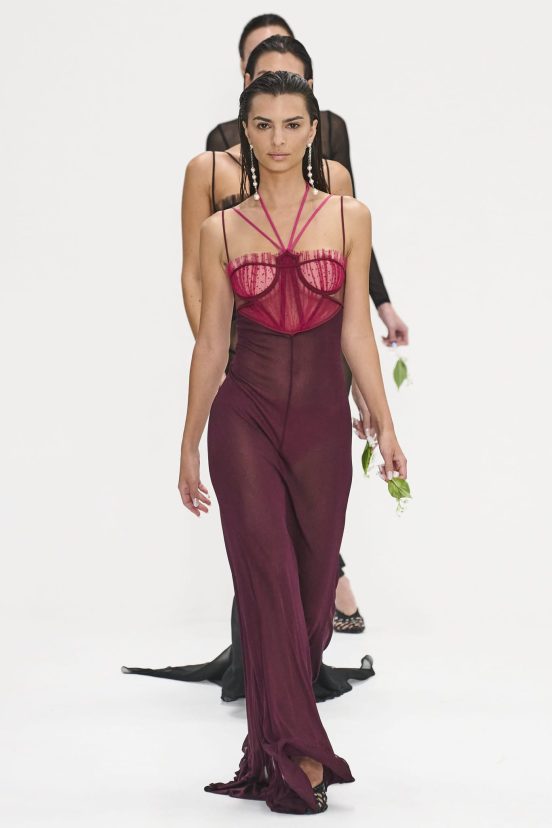 London is fast becoming the city to look to for modern party wear, and with sex running through the season as a key trend, Nensi Dojaka has managed – in 3 Short seasons – to corner the market as the brand that all the girls want to be seen in, for day and night.

Increasing her remit of sheer panelled dresses which are punctuated by tonal or contrast binding, this season was all about playing with texture and fabric, with her finale look developed from dead stock fabric sourced from Nona Source, who also worked with Harris Reed on his collection from the start of the week.

Playing more into separates for SS23, look four was a potential sneak peek of a future category expansion for the brand, semi-sheer cycling shorts and a delicately strapped camisole were an effortless interpretation of modern intimates. An area the designer could easily dominate as the underwear as outerwear trend builds across the streets and on the runway.  This would be a natural progression for the brand as her style would translate well for that market, rather than coming across as an easy money-grab.

This season her tell-tale angular cut-outs become more organic and circular, adorning the midriff section of strapless minis and minimalist maxis, a detail that was a refreshing nod to ‘The New Sexy’ and the bare bodies we have seen on the runways of late, showing us that there is more than one way to reveal, yet conceal one’s body.

Eye-catching surface shimmer came in the form of iridescent sequins applied over pink tones, which the designer started to explore last season, but metallic silver strappy tops, surprisingly paired with the brands first foray into the world of denim – here an of-the-moment patchwork pair – will surely be some of the most wearable pieces come summer 2023.

Tailoring became a lot more technical this season, an elevation of the skinny pants and slouchy blazers from her SS22 collection. As workwear takes on a new meaning post-2020 Dojaka shows how it can command as much respect as her signature styles. Today we saw a blazer dress which incorporated seamed bust details, a zipped opening and waist panels, a style the designer should develop further for Fall as the category is having a true moment.