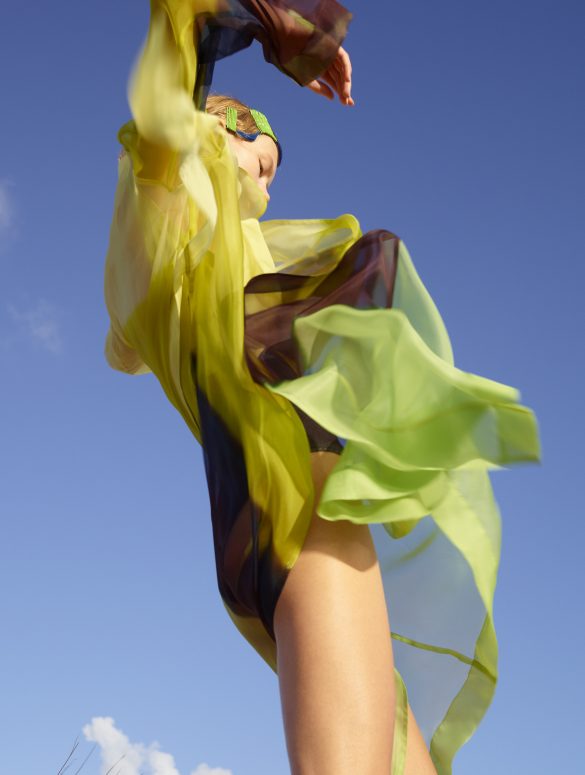 It doesn’t feel like there is a Paris fashion week going on now in its third full day.

Even for the few brands that managed to stage live shows complete with their casts of friends and family, the juice seemed to have died out not long after the last model exited whichever platforms they were walking on. The intensity of the usual dense ‘week’ has really dissipated into thin air so to speak. Are people not tuning in anymore?

Yet within their own microcosm, the designers stood their ground and did what creatively was best for their brand and their business. Perhaps this should be the real lesson from this crisis and a real opportunity for these fashion houses to abandon so much of the sounds and furies they have created in the past decade as fashion moved to the digital era.

Dries Van Noten is one of the few brands where it is imperative to see each new season’s clothes in a live fashion show. His clothes have to be experienced live to convey their power and the power of thoughtful and innovative design and fabrication.

For the decades that he had been showing his women’s and men’s fashion in Paris, Van Noten was never one for fancy décor perhaps except for his memorable Spring 2005 show staged to mark his 50th collection in October 2004 where the guests were invited to a dinner party set on a long table covered with white cloth and the models came out and walked on the table as the show’s runway just after the main course was served. With that singular exception, all of Van Noten shows were mostly in plain settings with little fanfare, or at the sumptuous ballroom of the Hôtel de Ville where no additional decorations were needed.

At Van Noten shows the clothes are always the main event and more importantly the clothes always manage to create the emotions that filled the audience at each of his shows. At a few of his shows at Paris city hall, the emotions were still omnipresent even after the sounds of the high heels against the wooden floor dissipated after the mass finale. Good fashion should affect people physically and emotionally.

In an attempt to create something on film that can mimic the real life walk of the models to replicate an idea of fashion show vibes, Van Noten looked to the work of the New Zealand artist Len Lye, who specialized in experimental films and kinetic sculpture that primarily involved movements and drawings made directly on the film, to make a short film with several of the models in his spring clothes dancing to loud music in the same manner as those Lye films from the 1940s that served to stimulate the senses.

Lye wanted people to have a complete full-body experience from seeing his films and his moving sculptures in the same way that Van Noten would have wanted his audience to experience this wonderful and very focused spring collection, preferably in movement in real life but short of the possibility of a live show this season, hopefully the video can fill a small gap. The short video Van Noten made combined the projections of four classic Lye films – Color Cry, A Colour Box, Colour Flight, and Trade Tattoo – onto the models as they danced around the studio in Amsterdam.

“We start working on the collection at home on Zoom. That was like a new take. It’s a way of working that I have never done before and a way to reflect on what is important in the future. Is there still going to be fashion in the future?” Dries Van Noten said in a video from Antwerp where he explained the genesis of this spring collection and the implication on his work and outlook due to the impact of the current crisis.

“One thing we are certain is it has to be simple but not boring and I wanted to make something optimistic. We talked about light and colors and we found some films by Len Lye,” the designer said of the clothes. “I love to see clothes in movements … and the way to incorporate the way the fabrics move. We want to simplify everything with this collection. Instead of the jacquards, we work with cotton organza and how we can make it move, make it stiff or soft.”

The stiffness of the cotton light blue single-breasted jacket covered by a black and green pattern printed cotton wrap vest, the crisp white cotton shirt paired with a red-black dyed cotton organza long skirt and light pink cotton slouch jacket with a soft orange shirt and yellow cotton short are what Van Noten said about how within the limits of the available fabrics he had to find a way to make cotton more versatile, in order to offer the different range of cuts using the same material. The multi-colored light flashes in Lye’s films now translated into light painted stripes across a long-sleeved flared white dress, on a black gabardine double-breasted long coat with zig-zag wave-colored stripes, or on a simple caftan tunic dress in black with horizontal stripes. The multicolor floral cotton gauze and organza sleeveless dress is an example of how the imagination can supersede and potentially overcome the difficulties at hand simply by virtue of making do with what was available and stretching them to a creative limit.

“More simple but also more complex in terms of printed fabrics instead of embroidered fabrics that show like a projection rather than print,” Van Noten explained regarding these looks.

“Normally I have a different approach for men and women but this time I wanted to have one collection and message from the same starting point – it’s not the same clothes but message,” Van Noten said of the first time that both collections were conceived at the same time. This resulted in a men’s collection that is as colorful and light as the women’s with a lot of shorts for next spring.

The Lye effect can be seen in the brown cotton printed two-button jacket with printed patterned shorts, the brown and black/red printed patterned relaxed suits, the color combination of orange jacket, black sheer tee and light pink pants. These are the men’s silhouettes that Van Noten has worked with over the years but now he has rendered them in a mix of bright colors to reflect the projection of hope. Van Noten made the simple light blue cotton slim jacket tucked into light pleated pants seem so elegant with its simple and clean shape. That’s how fashion can be in the hands of someone whose specialty is clothes.

Restrictions on movements and travel did not in any way restrict how Van Noten managed to create a clear and focused collection. He said he had picked the photographer Viviane Sassen who shot the images because she could bring out the emotion of the clothes with slight movements, lighting and composition. That’s the next best thing to a real live show.

In his second presentation and his third season for Patou, a brand that LVMH in 2018 revived with a presentation at the house’s office headquarters on the Île de la Cité facing the river, Guillaume Henri celebrated the charm of French elegance that was what Patou was know for, with a series of voluminous dresses in colorful floral prints or in white organic or recycled cotton with big puffed sleeves and ruffled trims. Patou’s strategy is to market a focused collection with an eye on affordable high fashion and here Henri drove forward with his aesthetic of French elegance regardless of current times.

It sure is not a moment to be shy about wearing a light pink flare dress with long sleeves and rows of ruffled trim at the bottom or a pink floral cocktail dress with giant sleeves and bow tie neck. These dresses also came in more commercial solid black and beige satin with short puff sleeves. The small collection has the flavor of the mid-1980’s say like the kind of dress that maybe a Cyndi Lauper would wear. Even black pants had large trims of feathers attached at the legs, as not much was left for a minimalist approach.

There will be a niche set of customers who would want to dress in this manner. Looking at these wonderfully made clothes gave not just a feeling of nostalgia, but their sense of aesthetics doesn’t seem to have evolved with the times.

Elie Saab’s headquarters in downtown Beirut was destroyed on the evening of August 4th when a massive explosion destroyed a large segment near the waterfront port area. “Like many Lebanese, we witnessed wars and crises and endured chaos and displacement but we are resilient and will continue our journey to make Beirut rise again. We will never give up and will never stop rebuilding it again to shine, always spreading joy and life,” Elie Saab wrote on his Instagram the day after showing pictures of his destroyed headquarter.

Yet out of this devastation, Saab who had his independent fashion business since the early 1980’s specializing at the time in the bridal couture segment, worked to get his haute couture ready for client appointments mid-September in Paris, working from another studio space further away from the destroyed ports area. For that collection he evoked the sense of renewal of the natural world, of woods and forests away coming back to bloom no matter what had happened.

Late in August Saab managed to reopen his atelier studio and began working on a smaller spring collection that was filmed in Faqra, the archeological site with Roman and Byzantine ruins on the slopes of Mount Sannine titled ‘Hymne a la vie’. The film directed by Mounia Akl displayed a group of models among the rocky hills of the mountainside town. At one point the girls walked on a deserted road all wearing assortments of red looks. Against the stark rocks and bare sands, the video provided that gleam of hope that beauty may overcome all possible setbacks. It sure was a dreamy moment when the women gathered in light pink chiffon dresses relaxing against a giant stone on the ground.

The collection is a mixture of the soft silhouette dresses in chiffon and silk that Saab is famous for with a light blue print or bright green pantsuit for day wear. The kinds of clothes in this collection have put Saab in a stable business all these decades and will surely find their customers today. Yet there is a much lighter hand seen here where the past tendencies for fancy embellishments have been reigned in under total control as the designer intrinsically understands more than anyone what his customers would want now in terms of clothes.

Looking closely at Marie-Christine Statz’s Gauchere spring collection that she showed at the Espace Commnines, it is hard to determine any kind of specific direction the designer had in mind when she began crafting these clothes, first conceptually then in the physical manifestations of garments that ranged from oversize suiting shapes to slim Maoist suits to, well, a kind of white cotton multi straps asymmetrical wrap tank (not sure if I can describe the item with any accuracy). Then there was also a light grey wool jacket with partial intricate work of pleating that was done unevenly on both sides of the front of the jacket, paired with a grey wool pant that had ruching on one side of the leg.

Well you get the point.

While a beige trench coat looked fine, or even a simple black pantsuit or a long blue dress were fine garments, they still beg the question as to why consumers with so much choice would come here if they don’t find any point of view they can share.