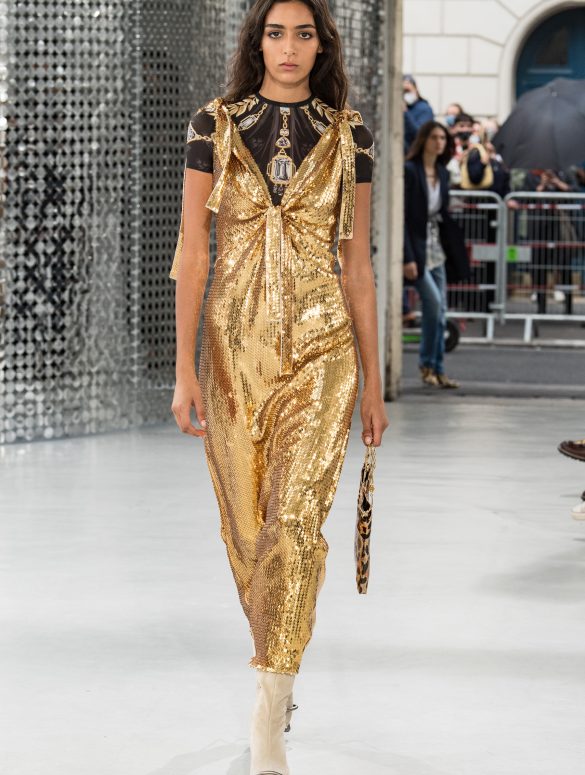 On this very busy Sunday in Paris, there were several firsts – Gabriela Hearst showed her first live show as part of the Paris Fashion Week, defecting from a New York show season that has been totally decimated, and not just by the pandemic, and Matthew Williams revealed his first remake of Givenchy. Both of these events were remarkable but for different reasons.

Julien Dossena responded powerfully to the crisis at hand by sending out a collection that was imaginative as it was daring in the way he had refused to compromise his vision and how he translated that point-of-view to his Paco Rabanne collections each season since his arrival at the Puig owned brand in 2014. Dossena carried on the tradition of creating collections that often mixed experimentation but never strayed too far from within a wearable wardrobe but in the spirit of the house’s founder 1966 collection of Twelve Dresses in Unwearable Materials that started the brand back then.

Under Dossena’s creative leadership, the Paco Rabanne classic chain mail metal dresses were given a second life, one just as fabulous as in their first outing more than five decades ago.

These hard futurist dresses were given softer touches and now were destined for a new generation of young women consumers. His collections encompassed from fancy gym wear to elaborately made couture dresses that often seemed easy and laid back – all rendering the cool factor for the brand in the last few seasons.

The spring collection he showed live demonstrated his ability to juxtapose different elements to create both interesting garments and when put together interesting looks. Overall a strong sense of the street vibes permeated throughout the line up wearing looks like a short sleeve light sparkle leopard print long coat with a black bra and blue jeans, a double-layered lace dress over a leopard print tank, a zippered knit strap cardigan over a black lace tee shirt and black plaid pants or a fur coat over white lace cardigan and blue jeans. They have a feel of vintage in the mix and that’s fine for clothes that are familiar and above all friendly. The proportions were lean and clean even with the fantastic metallic circle mesh dresses that closed the show staged outdoor in the Marais.

The show was like a compendium that mixed different styles and epochs together as well as diverse sets of materials that almost like a hippie fashion revolt against the mood for a calmer and a more reflective mode for fashion today. The clothes address these times in a forceful manner without making any excuses or compromises.

For his Schiaparelli haute couture presentation in July, Daniel Roseberry had a videographer followed him to Washington Square Park in downtown Manhattan near where he lives to film him doing sketches for a potential couture collection that was not possible to realize with the ongoing lockdown measures still in place at the time.

In the new video for his spring ready-to-wear, Roseberry was seen again but this time inside his studio atop the Place Vendôme with his paint brush drawing the lines of a pad lock that will eventually become a golden lock on a black leather belt or as a large necklace.

I wanted to create something essential. Not basic, with all that word implies, but something elemental: a few key carefully chosen pieces that express the tenets of our house, that a woman would wear today but also decades into the future.

“I wanted to bring that same level of care, of details, and of time to this collection to create the most luxurious yet effortless ready-to-wear looks around: the patterns are a; hand drawn, and the embellishments, from buttons to clasps, are all distinctive and considered,” the designer said of the process from his initial sketched to the final outfit.

The problem of reviving a fashion house with a particular heritage is the degree to which the team today has to adhere to the house’s known heritage and work to include these elements today as if the new set of customers has to be reminded of old legacies in order to find the clothes attractive. This problem is particularly acute at Schiaparelli which was purchased in 2007 by the Italian Tod’s Group with the hopes of bringing the brand back to fashion life in 2014.

The house is now in its third creative director since Marco Zanini anchored the relaunch for a year, followed by Bertrand Guyon, until the arrival of Daniel Roseberry in April 2019 who made a promising debut with a couture show that did not dwell so much of those famous ‘lips, hands and lobsters’ of Schiaparelli’s past signatures. Roseberry has been developing the ready to wear outside of the fashion show circuit mainly for clients and interested stores.

Now for spring, Roseberry is proposing more sensible garments that truly reflect the spirit of the now with clothes that are meant to be classic and enmeshed with the couture sensibility and for those worrying about sustainability clothes that will last longer in the closets. Words are one thing, clothes are another matter.

But the collection seemed overburdened with added elements that seemed at best superfluous at worst making the garment seemed heavy-handed and over design. Fewer and fewer young women aspire towards these kinds of styles that don’t seem so much about the present despite the designer’s reassuring words.

The video presentation itself disclosed this dilemma. Roseberry designs are fine until they are over accessorized as the camera focused a great deal on those details  – gold mask, gold fingernails, gold padlock necklace, golden lobster necklace, double-fish necklace, golden buttons, and golden bell earrings. Granted accessories have to be sold – shoes, bags, and custom jewelry but here they add more burdens to the clothes.

Hidenori Kumakiri, the designer of his Tokyo-based label Beautiful People, was a pattern maker working in menswear at Comme des Garçons for six years. He launched his brand in 2007 and began a career epitomized by his conceptual approach to clothes with past collections that verged on a platform where opposing ideas can merge like fusing children and adult and male/female garments since showing in Paris in 2018. But his specialty and training as a pattern maker have cemented the sharp ways he created his collection always with a little humor but well-made clothes.

Like pieces in a museum, we have been stuck inside our homes. What if the clothing becomes our habitat? What if what we wear entices motion and emotions, elating the spirit while suggesting a reassuring coziness, the pleasurable comfort of staying inside?

Kumakiri asked the fundamental question that almost every designer around the globe has been asking since the lockdown – What are clothes? What is fashion now? How each designer resolves these issues is how they conceive these new spring ideas whether in a live show, a conceptual film, or a lookbook.

Kumakiri wanted to move forward by making his spring clothes that he hoped would suggest the path forward with a degree of positivity. From the perspective of a pattern maker, the designers crafted an interconnecting system of pockets inside each garment and filling them with small beads so that the shape of the clothes altered with each movement. “A skirt turns into a couch, a dress into an armchair, only to revert back to what it was,” the designer explained of this transformative process about his more than not experimental garments but always with the notion of wearable.

Black strapless jacquard silk print bubble strapless dress with circle short sleeves, wool floral sweater and bustle skirt with black silk print overlay, a giant silk satin black inflated blown up sleeves A-line dress, and a black velvet deep v-neck dress with circular bubbles 3D large floral patterns were Kumakiri’s garments that both confine and liberate. He adopted the Dior’s new look in the form of a white jacket with pushed up hips and waist paired with a black long skirt as a tribute not only to Dior but to the spirit over overcome devastation with the simple expression of universal beauty expressed in an outfit.

Kumakiri is surely an idea designer but how well he adapts these ideas into wearable clothes for a larger public remains to be seen. But the heart of fashion begins with ideas and ideas that are never wrong or right as they provide a platform for changes in what to wear. Now the designer needs to crafts these ideas into good clothes to share with his customers.