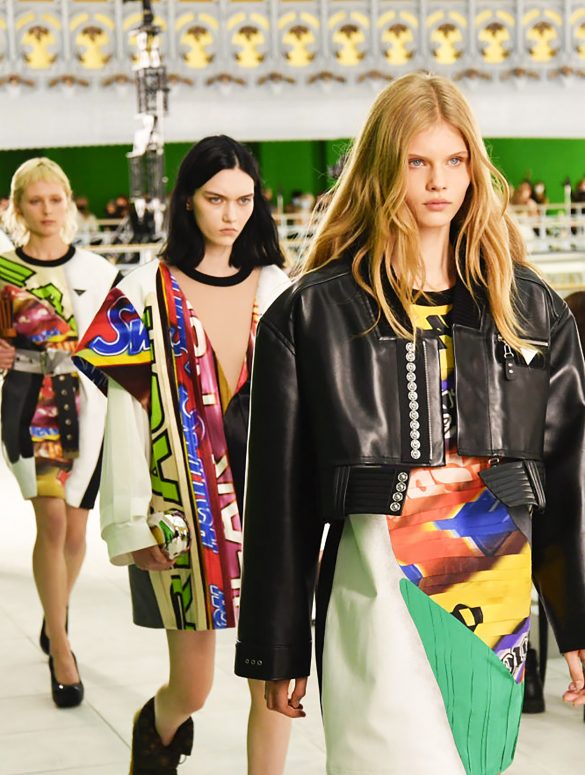 The In-Betweens and the Definite

“More than an inspiration, it’s a question, the very significant one of gender. We’re going beyond the basic idea that a woman gains power by co-opting the masculine wardrobe. What space is there for a category of clothing between the feminine and masculine? It’s a growing space and its contours are ever more permissible. We’re defining a type of clothing that lives in a non-binary zone. It’s fascinating to consider. What is a non-binary garment?” Nicolas Ghesquière said in a post-show statement after his Spring live Louis Vuitton show at the newly renovated Samaritaine department store, on the top floor of this historical Art Nouveau building facing the river Seine.

Navigating between the masculine and feminine has been the current currency in fashion’s obsessions with gender fluidity, with so many designers attempting to erase this boundary by making the same clothes for both sexes or adapting one’s sex traditional clothes for another, and so forth. The French designer Jean Paul Gaultier has been working on this paradox of gendered clothing more or less his entire career trying to find commonalities on one hand and erase differences on another hand. His defining Spring 1985 show titled ‘Un garderobe pour deux’ in October 1984 was the first runway show in Paris to propose one set of clothing for both sexes in which males and females wore the same clothes and some hybrids like a skirt-pant combination.

This season both Thom Browne and John Galliano at Maison Margiela proposed co-ed collections and by co-ed, these designers meant clothes made in the same way for both sexes, not garments made for one or the other that could be worn by both. It is also a treacherous territory for fashion that’s easily mined but difficult to execute in a flawless way. Ghesquière showed segments of Wim Wender’s film Wings of Desire, the romantic 1987 movie about immortal angels in Berlin.

What Ghesquière referred to as co-opting masculine wardrobe for power was perhaps a reference to the designer Yves Saint Laurent’s penchant for taking exclusive men’s wardrobe such as the tuxedo and turning this garment of power into Le smoking in 1966, giving his women an equal status sartorially at a time when such notion of equality of any kind was at best far distant. This Yves Saint Laurent pantsuit for women shattered the image of one particular type of gender garment and did so mainly on the point of the perception and of how people in society viewed clothing.

Here Ghesquière was not talking about an interchangeable set of garments that men and women can all wear, rather he was asking whether from a design perspective was there a middle ground somewhere or ‘in-between’ as he referred. Clearly for the seasoned designer, this remained a grey area in the fashion pantheon that he was attempting to address in this spring show where the clothes veered towards the feel and look of 1980’s slouchy and oversized shapes with a strong influence of the late 1990’s streetwear vibes that reminisced the kids in the photographs from documentary photographer Jamel Shabazz.

The show opened with an ecru thermal long sleeve with the word VOTE printed in yellow paired with multi pleated khaki loose pants and a large leather brown belt, perhaps as a nod to the young people in America and the upcoming election, now less than a month away. From there the show progressed to the oversize trench, coats, a grey sequined cropped jacket suit, and various loose blouson paired with long skirts or loose pleated pants.

“If you take a powerful term like ‘gender-fluid’ and apply it to fashion, it’s really the idea of fluidity in a garment that moves harmoniously from one to the other, and which is one and the other,” Ghesquière said as a way to clarify that fluidity meant clothes that can be both at the same time. However, at times it is difficult to understand what the designer meant as an in-between space between masculinity/femininity boundaries – this notion of hybrid garments or even transitory garments was not entirely clear as expressed in the clothes such as a grey silk satin splash painted single-breasted pleated pantsuit and leather dress shoes that conveyed a clear masculine rather than some level of cross over or in the middle.

He mentioned the series of loud printed oversized dresses shown towards the end, that can be either dresses or XXXL tee-shirts that skaters wore over their shorts, or as many young urban women wore sports team jerseys as short cocktail dresses. Some of these print dresses or those cropped large short-sleeve printed tee shirts, a look similar to those football players who wore half jerseys at practice, recalled those mixes of impact prints from the Japanese designer Kansai Yamamoto in the 1980s.

Sure taken apart, there are great merchandise and a lot of different items at the commercial level. The outerwear should be able to perform well as a segmented category, as well as some of the printed tees and dresses. The show though did feel more relaxed and more laissez-faire, a grunge moment at the mega luxury Louis Vuitton, than say last season’s super-production fall show with the wall of fashion history acting out in a real-time machine.

The heart of the fashion at Louis Vuitton should be one of delivering a consistent  image and message to the audience and to the consumers that evolve from season after season so that the consumers can identify a signature Louis Vuitton look or style, besides having to display the LV logo like the small triangle on a few of the large cropped tee-shirts and print dresses.

What is a Louis Vuitton signature fashion look?

How can consumers identify a Louis Vuitton style?

Demna Gvasalia and Alessandro Michele both have firmly established a definite fashion identity at Balenciaga and at Gucci respectively, sending out consistent fashion messaging from season to season thereby building up the brand’s signature looks that consumers can easily identify. You can tell that look is Gucci and that look is Balenciaga.

Here at Louis Vuitton, the fashion image changes on a seasonal basis and nothing is built from season to season so that it is difficult to say what a Louis Vuitton signature is, or if one exists.

At a time when building community is critical for all brands aiming at younger consumers, having a particularly strong fashion signature help to build that community as the identifiable signature is identity and is core to community formation. This signature should be a fashion look or style and not just a logo or a logo pinned on a garment.