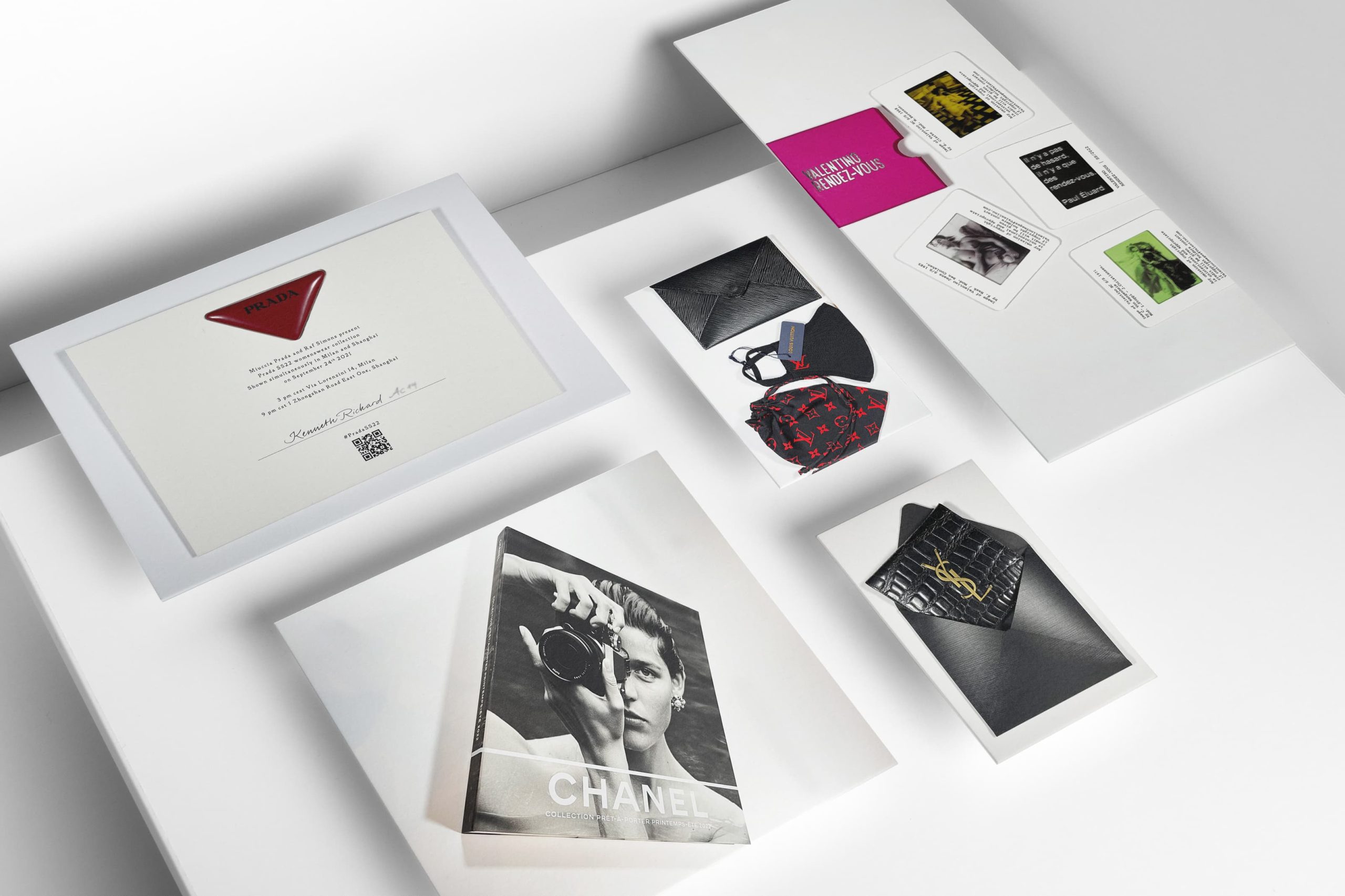 As fashion houses reveled in the return to physical shows and grand spectacles, so too did their fashion show invitations. With beautiful physicality and exquisite detail, these fashion show invites were designed to function on multiple levels of engagement from pragmatic necessities to digital innovations and beyond; the best show invites created buzz for upcoming shows while simultaneously delivering their own uniquely tactile experiences.

Prada’s fashion show invitations checked all the boxes; the brand used physical invitations as a gateway to the show including a scannable QR code; there was a wearable portion as well, in the form of a glossy red pin shaped into their trademark triangular logo. Louis Vuitton also had an aspect of accessorization in the form of a red-and-black branded facemask with matching printed pouch.

Valentino sent out teasers for their artisanal-cafe-themed fashion show in the form of nostalgic slides, like color-coded avant-garde-era readymades for vintage projectors. Saint Laurent’s offering was heavy and hard to come by, as they sent out only a few hundred invitations with embossed black-leather wallet-like pouches, which were monogrammed with the initials of each invitee.

Balmain’s invitations had an interactive element in the form of a branded wristband for drinks that lit up with a soft red glow; the fashion show was also a concert so the bracelet-like wristbands were a momento of sorts as well. Boss played up their baseball theme with branded balls and caps, while Isabel Marant incorporated a miniature digital LED banner that played the designer’s name plus the name of the newest collection.

Chanel’s invitation included an oversized poster featuring photography by Inez and Vinoodh. Nearly 5 feet x 5 feet square, the poster was printed on both sides with black-and-white photography that turned the tables on traditional notions of the “male gaze” – since the imagery featured a model who has turned her camera lens to face the viewer, like she was about to take a shot paparazzi-style. The poster also mirrored the backdrop for Chanel’s fashion show, in which models were styled like 90’s-era supermodels and were instructed to prowl the runway like Linda Evangelista in George Micheal’s “Too Funky” music video circa 1992.