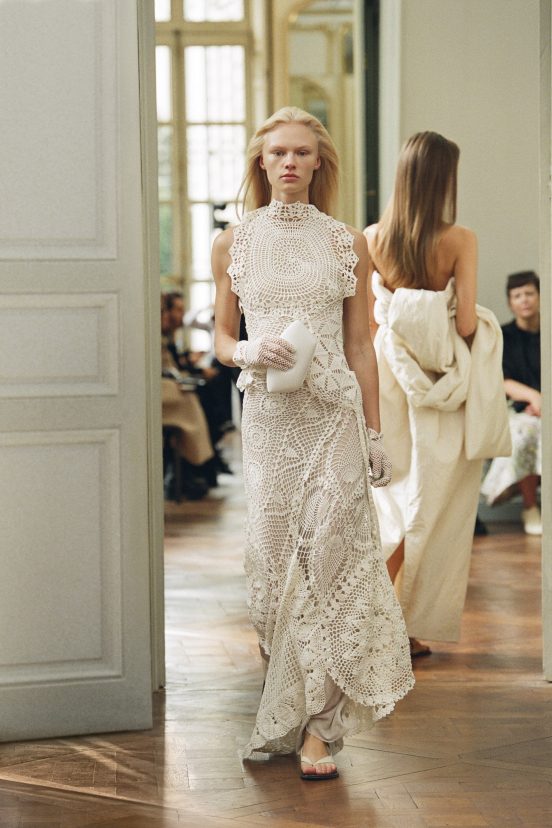 Review of The Row

When Simplicity says it Best

Consistency breeds loyalty, and as brands go up and down the ladder of demographics, Mary Kate and Ashley Olsen’s The Row have cottoned on to the fact that what customers seek, among other things but definitely in the Top 3, is consistency. Imagine that, being able to return to your favourite brand season after season and still covet every item they develop because they understand you and what your lifestyle needs are, and while meeting those needs they also remember to provide moments of delight in the process.

Imagine that, being able to return to your favourite brand season after season and still covet every item they develop, because they understand you and your lifestyle needs.

As improbable as it sounds, tailoring within this context appeared very much as a base layer to every other category that was shown, but this was no ordinary sartorial suiting, as what the brand are prolific in is the art of subtlety, which needs to be experienced up close in order to discover its nuances. A black short suit – a style that has been gaining traction for its versatility and suitability across the genders – at first looked like a traditional style in classic black, yet as the model made her way around the room the back view revealed a cleverly constructed feature that meant the armholes were left open leaving the models arms free and the sleeves to drape loosely at her side. So unconventional, but it’s the added value customers will expect when it comes to justifying purchases at this price point – a tailored blazer can sell for anything north of $2000.

A simple shift could be dismissed as just that, but it was a masterclass in how to create a minimalist masterpiece. Starting from the bottom up, affixed to the hem was a wide panel of satin unfinished to create interest, soft creases across the front, with one even creating the illusion of a princess seam, and again when viewing from a 360° angle a curvature had been built in through creative pattern cutting and excess fabric. And of course with The Row the beauty of these styles allows them to be worn for any occasion, hence the styling with elbow length gloves and clutch.

The real return to craft didn’t miss the Olsen sisters who had a rare moment of fun and developed a dress and top made from that most domestic of decorations – the crochet doily. Often associated with the living rooms of aging grandmothers, here we got a repurposing of this familiar item in an off-white maxi with matching gloves to boot, but where it was used best was to introduce the only hint of colour in the collection as a colour blocked green and off-white vest top. This style will hopefully knock the jersey tank off it’s pedestal or at the very least offer an alternative for those outside of the Gen Z demographic.

A dozen coats in a dozen ways, customers will have their pick of outerwear for summer 2023, with the brand concentrating on offering options come rain or shine. Easy overcoats that will be no-brainier investment pieces in neutral tones, just skimmed the knee for a flattering effect, while a longer style with hidden placket was worn by an older model who was reflective of the brands core customer and will resonate. Another trend across outerwear is the way in which lengths have begun sweeping the floor and for this show a single-breasted style in satin hid a dramatic back pleat, which not only created a talking point for onlookers when the model turned, but it’s practicality means the wearer will be free to move about her day with ease.

Despite the brands M.O being stated as the “quest for simplicity”, a small moment of ostentation could be found in the beaded gowns, with a simple black maxi dress that wouldn’t look out of place on the beach, or there was a dramatic hooded version in all-white that was giving off the look of medieval bride.

As the winds of change blow through the season, with debuts and departures making headline fashion news, The Row provided a welcome salve to all the noise giving us what we came to see – well made, beautiful clothes, driven to differentiate through detail.