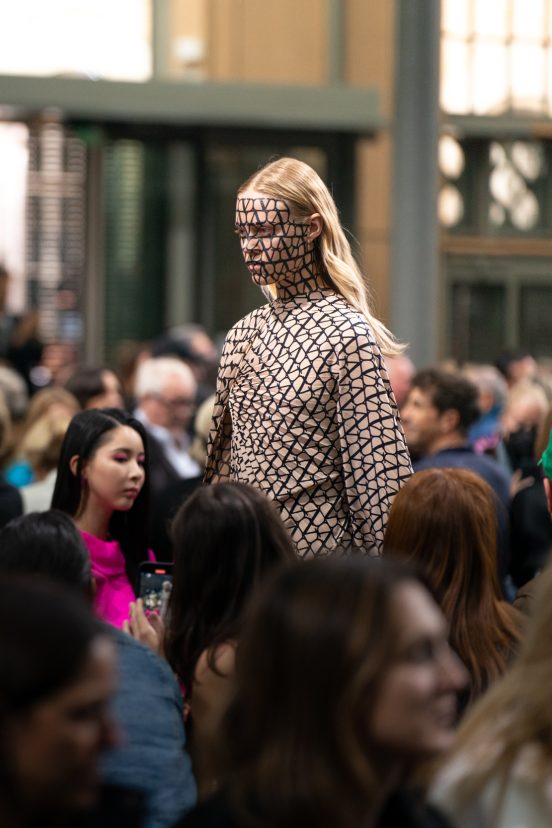 At Valentino, Pierpaolo Does the Math

Today’s Valentino show felt like a return to the brands playbook. Still present and correct were Pierpaolo Piccioli’s use of dividing his runway shows into segments punctuated by colour, but this season there was no singular hue, such as what we witnessed with his fuchsia pink moment, which must have been a marketing home-run – here in Paris the façade of the Rue St. Honoré store has been completely wrapped in the Pink PP, drawing hordes of visitors and Instagram-obsessives alike. At the show it was a case of every other attendee sporting pink, proving the power and success of this activation and its singular vision.

Spring, summer, or fall, designers are adapting their collections to their own visions and are not dictated by a rigid buying calendar

It is evident, both from observation and the studying of show notes, that designers this season have been grappling with complex mathematics. In their studios and at the ateliers, decisions have been taken on what to add, what to subtract, and what ideas are so good they should be multiplied.  Taking into account “All the signs, shades, cuts and codes” todays shows was a self-confessed synthesisation of all the elements which make Valentino a powerhouse.

A hallmark of Piccioli’s Italian sensibility is his innate ability to view ladylike dressing through a modern lens, ensuring it never strays into the realm of stuffiness. One-armed or asymmetric cape dresses, floor-length shirt dresses metres long, and a bodycon midi-shift encased in a sheer overlayer. What felt really new was the experimentation with illusion as sheer blouses were constructed with ‘nude’ bodies concealing the bust, and an open front bardot shirt was layered with a skin-tone coloured vest to protect the wearers modesty, elements that we haven’t seen before from the designer, and which would be a great addition to his collections.

Colour was given character, with a wider breadth of pantones to choose from, as shimmery jewels and sparkly sequins turned up the wattage on pleated tailored coats, and wide leg cocktail pants in grass green.

Taking the concept of ‘You are Your Brand’ to its inevitable conclusion – especially in the digital age – the release of graphic imagery as part of a preview across its social media, featured Kristen McMenamy embellished (across the top of her body, face included) with the brands logo. This was repeated on models at the show who wore a branded item with matching gloves, tights, shoes, and accessories lest we forget who they’ve pledged their allegiance too. We are clearly not over the influence of logomania, but the geometric construction of the houses’ signature created a distinct linear pattern, which from afar is not instantly recognisable and so not as jarring as overt displays of logoised branding.

A hallmark of Piccioli’s Italian sensibility is his innate ability to view ladylike dressing through a modern lens, ensuring it never strays into the realm of stuffiness.

Becoming a deft hand at subverting the seasons, this show seemed like it would lend itself to Fall, and maybe that was the point, as his Pink PP collection demonstrated designers can choose to design into or out of the season as it suits.