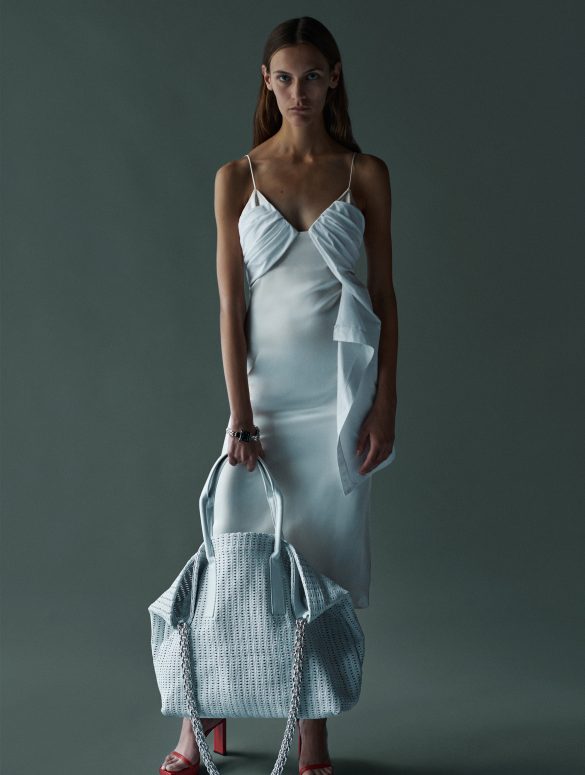 It is easy to see from the images of the clothes from Matthew Williams new 1017 Alyx 9SM spring 2021 men and women collection that are so precise and sharp tailoring cuts of the jackets, the coats, the dresses, and the pants the reason why he is selected as the new creative director of Givenchy where his debut show bows on late Sunday, October 4th. But it is the special touches and details that Williams adds to each garment that make them specific to his design ethos – this season it is the subtle addition of the gold and silver metal chains and circular studs that adorned the sleeves, pant legs, or as shoulder straps for a black leather weekender bag.

Prior to founding Alyx in 2015 with a fall collection named after his daughter, Williams had traversed what would have been the ultimate internship if there is ever such a thing – working with Lady Gaga, Kanye West and starting the clothing brand Been Trill with Virgil Abloh and Heron Preston. A year later Williams was a finalist in the brand new young designer LVMH Prize, perhaps the only one in the group up for the awards who had no formal fashion training.

Fashion today is much less just about the nuts and bolts of designing a garment – there are seamstresses for that kind of technical work. Now, the context of fashion is where this fashion intersects with the different elements of pop culture, of current music, of new art, and also of fashion history. 1017 Alyx 9SM is the code and the clothes reflect the attitude of the new generation and the new audience of fashion.

Straight and slightly loose tailoring pervades throughout the spring gamut – black broad shoulder single-breasted jacket and pants, cropped slim black wool coats, and iced blue double-breasted coat pantsuit with raised angular small lapels for men and ecru wool slim coat and pants, ice blue satin dress with black leather corset top, and a black wool slim pantsuit for women. Williams added an attached neck closure adds a design element to the coats and jackets that make these garments more distinctively his. These are classics clothes – they are neither momentary trend nor are they streetwear garments. A camel sleeveless long coat with a defined shoulder, a metallic print leather blouson, and matching pants and those black and white pants with round studs are few of the great garments all adorned with attentive detailing.

Williams’s next act in Paris is one of the two most anticipated shows of this coming new season.