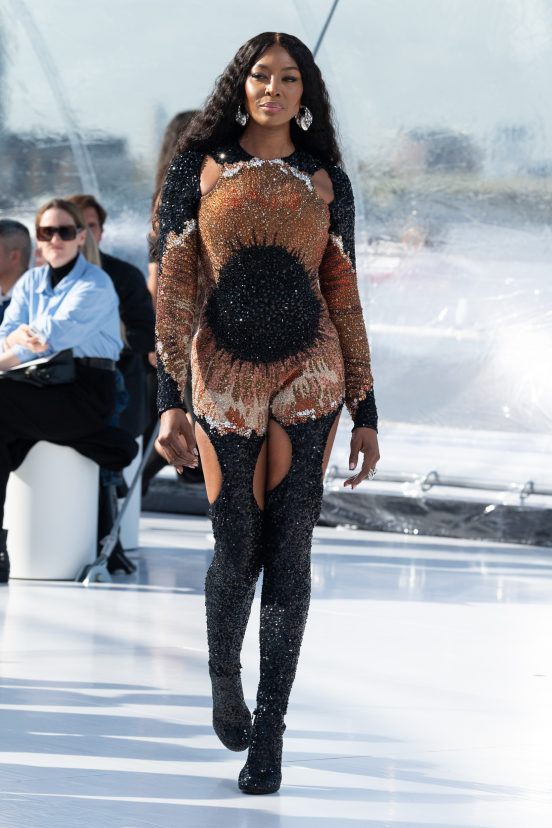 A Emotional Vision for McQueen

There was an indiscernible shift in Sarah Burton’s summer 2023 collection for Alexander McQueen, and it was expectantly good. As the brand, who have taken to showing outside of the traditional fashion calendar at least once or twice before – Fall 2022 was presented in New York for instance – ‘stripped back’ and returned to basics, or rather retuned to and refined house codes to great effect.

As we navigate the upcoming period of the unknown, we have witnessed all season long, certain brands and houses turning inward and asking themselves what sets them apart in a crowded market.  And that is what was witnessed in Burton’s bubble, a confidence and reassertion of the tropes which ensure the brand can be recognised from across any room.

The collection is about searching for humanity and human connection. The eye is the symbol of that humanity.

Opening with the statement of a painted eye across an asymmetric dress, the brand presented a graphic symbol of how human connection (according to the Creative director) can be fostered through the eyes – a window to the soul, if you will. Although a sentiment that will translate, the bold nature of the ‘eye’ worked best when it appeared much more abstract, as it did when applied across slimline tailored suiting that would require the viewer to stand back in order to get the full picture.  An extraction of a blue iris into a spot print gave a youthful spin to a fit-and-flare gown, and when worn as a catsuit by Naomi Campbell, as an almost pixellated embellished motif with thigh cut-outs, it had the effect of the watcher becoming the watched.

Tailoring was of course sharp, and cut close to the body, but innovative cutting techniques which dissected each silhouette gave the illusion that each jacket, trouser, or boot once whole, had been sliced with the precision of a scalpel, perhaps reflecting the imperfection of humanity.

Particularly strong were the denim pieces on show today, having always had a way with the fabric, especially during the pre-seasons when it has formed hybrids with bomber jackets or chunky knitwear, for summer 2023 denim jumpsuits with open sides and backs, or high-cut denim shorts with moulded corset belts will be on the wish list of every Y2K revivalist.

The decision to keep a tight palette – black, white, cobalt, red, orange, and brown – also allowed for the house’s signatures to take the spotlight, with each piece standing on its own merit, as there would be no adornment to hide behind.  Burton returned to the corset (opting out of the crinoline which has emerged as a key silhouette this season), and the influence of its construction was formed into leather moulds, giving a biker-girl overtone to proceedings.

An almost unrecognisable Hieronymus Bosch print was beautifully reworked by dialling up the contrasting tones, and for an artist known for his body of work which erred on the dark side, Burton managed to give the print a feminine edge.

Watch out world, the “Bumster” is back, and right on cue as sex on the runways is all that was making the headlines during fashion month.