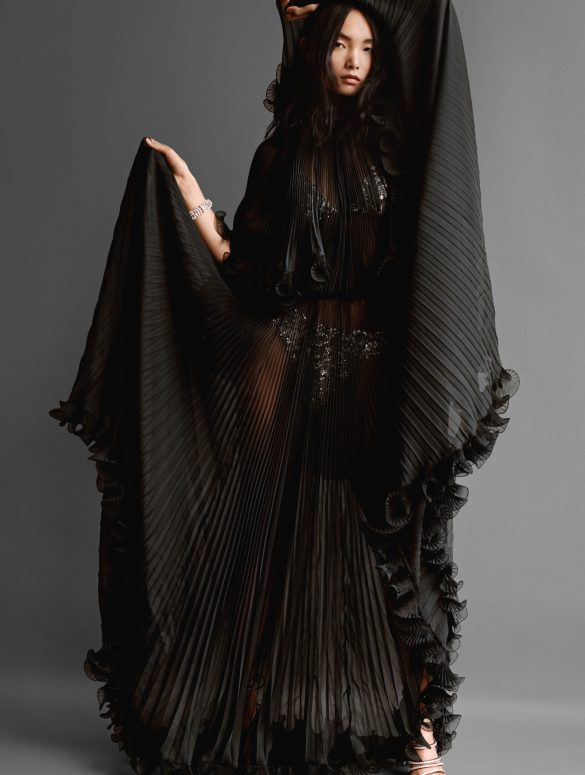 A New Parisian Mood in All Black and Diamonds

The entire fall collection is black because there is nothing more French than black and diamond sparkling. The black monochrome is simply the Parisian dress code. But I think this allows me to make a reset for the collection, putting back out what is valuable and what we like in fashion.

The French designer had just completed his move to this new spacious in March 2020 when the pandemic forced a total shutdown of the business at a time when buyers were placing fall orders. Then everything was frozen. “It was a challenging moment these last fifteen months, but the time allowed me to take a deep look into the business and make some changes. For example, I am working with a new shoe manufacturer Guiseppe Zanotti, a company that can make these sturdy boots and heels with decorations,” Vauthier said.

Rather than the colorful and moody Spring 2021 couture short film narrating the memories of going out at Le Palace in the 1980s and obviously with the clothes to match, Vauthier opted for this season to dwell an all back collection.  These are the types of looks that he did at the early stages of his independent company from the first fashion shot he staged back in 2009 after working at Thierry Mugler.

The all-black collection with a lesser amount of looks customarily required for a live runway show allowed Vauthier to concentrate on each garment with incredibly detailed handiwork.  The designer balanced between a fine-tailored boxy black pinstriped long jacket three-piece pantsuit or a fine cut black double breast coat with cape back and gabardine pants to the very fancy giant feather headdress paired with a strapless corset and fringed vinyl leather micro skirt.

The craft in this collection rival any of the bigger fashion houses still producing couture clothes. Vauthier showed a black pleated chiffon long dress trimmed with black feathers, sparkling brad and underpants underneath, and the black fringe leather cape.

Couture is about having this allure, the designer said, pointing to a black lamb leather biker jacket with intricate neckline embroideries and some fringes hanging from the shoulder. He meant that French style is a mix – of a sense of permanence and a new all mélanger or mixture as the French said. And no one is better to harness this sentiment and turn it into sumptuous clothes that feel young than Vauthier.