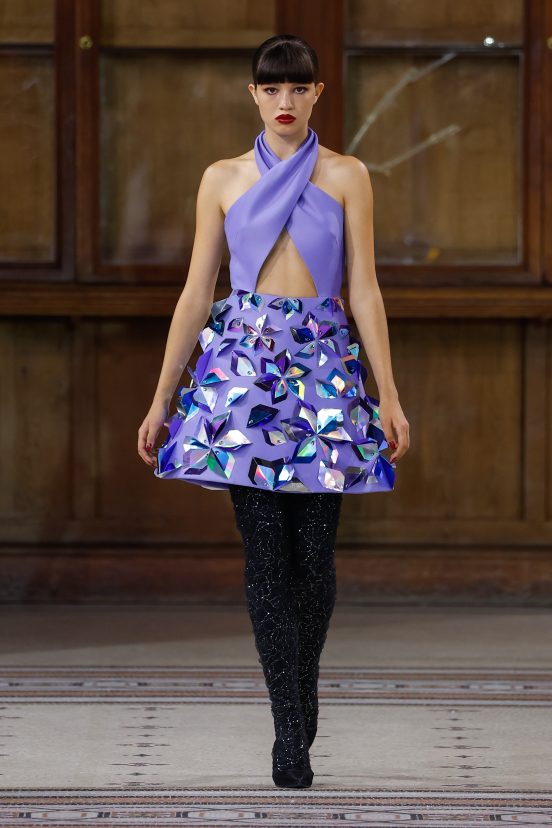 The blossoming of a new rose

Paris Haute Couture is always full of surprises, from the arresting presentations of established houses such as Maison Margiela, Fendi, and Gaulthier to Paco Rabanne. Then, one newcomer emerges as a blossoming rose to delight and entice the senses. Set in the historical Salles de Textiles in the Musee des Arts et Metiers, Paris, Bahareh Ardakani (ArdAzAei), (who mentioned she is originally from Sweden although of Persian heritage), presented her first Couture Collection for Fall/Winter 22-23.

Titled ‘Midnight in the Persian Garden’, this ‘one to watch’ designer, referenced the French poet Guillaume Apollinaire, one of the foremost poets of the early 20th century.

Her reference for the collection was, “Isfahan to the morning music, wakes up to the smell of the roses in her gardens. I have perfumed my soul with the rose for my whole life”. And so Bahareh wrote her show notes through the eyes of the poet, mentioning that the Persian garden, with its elaborate geometric arrangements of water, trees, and flowers, is a poetic ode to the transcendent beauty of nature. The ‘Persian garden’ has influenced many great gardens worldwide, including Versailles. Creating such sublime spaces in often arid regions requires incredibly complex engineering systems, and this care of construction also inspired this collection. Looking at the long black dress with the geometric patterning, appliqued in gold metallic thread, you could visibly acknowledge the connection.

One of the most humble designers, Bahareh spoke passionately about her collection and her use of intricate techniques of smocking, pleating embroidery, and applique.

Working with this kind of expertise, with couture craftsmanship, you can always push and find new ways and elements – that’s what I love”.

She also added that she endeavours to continue certifying part of her collection, the textiles, to the GOTS, upholding their strict ecological and social criteria.

Her materials were exquisite; floral embossed jacquards, silks, and satins were all hand-loomed in France and Italy in collaboration with highly skilled couture artisans. Elsewhere, the craftsmanship, second to none, rendered every detail as precious as the feeling of walking through a Persian garden at midnight. There were 22 looks, each equally as beautiful as the one that serenely crossed the room before it. Nothing hurried here, which gave the audience time to drink in the beauty of every delightful silhouette. The first look, an overcoat in a silk/wool blend Ottoman fabric, featured an asymmetrical hand embroidery with metallic threads and beads that refracted the light as a gemstone twinkling in the sun. Slits to the sides revealed classically cut trousers, while a soft shirt that fell in gentle folds to the waist came cut in organic silk satin.

For one so young, Bahareh is highly accomplished in her approach, understanding how to play off the different nuances within a design. Throughout, she carried off asymmetry in every silhouette with aplomb, particularly the second look in contrasting black and white; here, the play of pleats was perfectly balanced against the slim lines of the skirt.

The Persian garden’s blossoms came alive in her appliques, exploding onto a jacquard mini dress and again, on the bodice of a long gown, the skirt cascading in rhythmic falling petals, hand-embroidered with beads and sequins. The three-dimensional flowers were crafted from the finest silk organza sourced in Japan and finished with a degrade effect hand-painted on the petals. Her suits were cut with extraordinary precision, with strong shoulders and closed with a specially cut amethyst button at the front.

It is rare to find a debut collection so acutely executed involving beautifully crafted and developed textiles, and this same aesthetic traveled through the entire collection.

Added to this, her attention to detail came beautifully articulated. The volumes were well-balanced and free-flowing; nothing appeared out of place. Bahareh enthused about her team, the support of whom she is extremely appreciative. Not to mention the team involved in making the show happen. The artistic direction came from M/M Paris, Styling by Emmanuelle Alt, the music by Frederic Sanchez and the Production by La Mode en Image.

We were witnessing the blossoming of a new house that, due to the exquisite execution from its designer, was more couture than certain established houses have managed to achieve this season. Post-show, Bahareh mentioned that she had so many ideas, but for her, what she is most passionate about is the details, and it showed. Paris loved this outstanding debut collection, and if the post-show response is anything to go by, this next January will be a garden full of roses for this young designer.