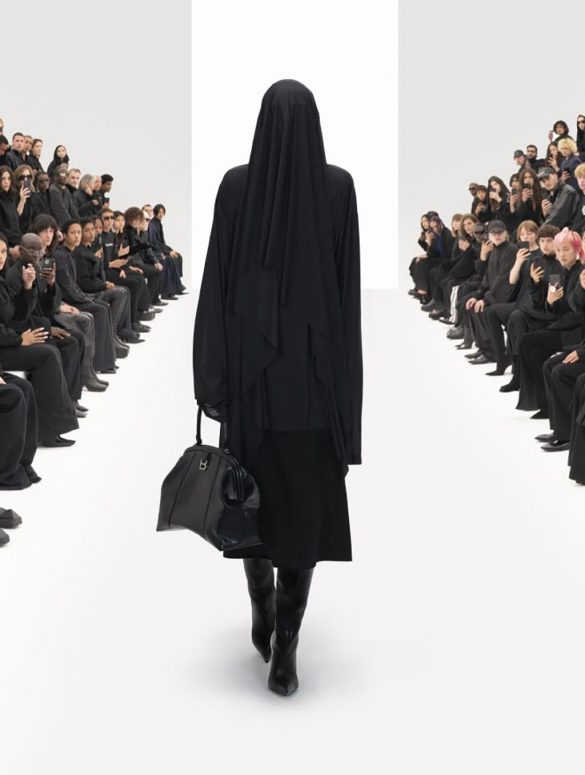 Testing an Innovative CGI Format While Touting and Celebrating the Familiar

“We see our world through a filter – perfected, polished, conformed, photoshopped. We no longer decipher between unedited and altered, genuine and counterfeit, tangible and conceptual, fact and fiction, fake and deep fake. Technology creates alternate realities and identities, a world of digital clones,” Balenciaga said in the statement upon the release of the Spring 2022 collection video presentation.

The French digital artist Quentin Deronzier created a CGI video of a runway show with a white back staging set and a socially distance black-clad audience, albeit an all machine-generated moving imagery using a combination of planar tracking, roto-scoping, AI, and 3D modeling to accomplish the hyper-realistic effect of a live fashion show.

The artist model Eliza Douglas, who had appeared in all Balenciaga shows since the Fall 2016 debut, is the only model of the show. Her photogrammetry captured and CG-scanned face is digitally and artistically inserted seamlessly onto computer-generated bodies wearing the forty-four looks in the show. Even the soundtrack is a hybrid mix by the composer BFRND – who has worked on Balenciaga shows since 2017 – rendering the classic song La Vie en Rose a new using AI voice-over. The video is just as artfully as the craftsmanship and tailoring of the giant brown-olive windowpane wool six buttons double breasted dropped shoulder hyper-length sleeves worn with a cotton plaid shirt and black tights.

The ingenuity of this Balenciaga’s Spring 2022 video show broadcast on the brand’s Instagram is the perfect algorithm for this moment, and not just in fashion. Staging this faux fashion show revealed our current times as the clothing collection the video portrayed as the brand continues to test the waters in the cultural and pop-cultural consumption world.

While the show veer towards high tech, the collection verges on the very familiar territory, containing all the essential Balenciaga elements that are instantly recognizable at this moment in time. The clothes, though, did not surprise the audience. But should they, as they are supposed to, be ‘clones’?

The severely oversized clothes are real, but surely one question is finally put to rest.

For those wondering if the current Balenciaga aesthetics have violated the house DNA codes, this show provides the actual material proof that Demna Gvasalia, the creative director, isn’t interested in reinterpreting specific garment structures established as the house’s heritage past. Instead, Gvasalia is taking the design philosophy of Balenciaga that focuses primarily on diverse shapes and applying this thinking to his collections. There is no remaking of the famous baby doll dress or the envelope dress from the late 1950s; instead, there are the makings of a new sensibility, one slightly distorted by the off-proportion garments throughout this show.

Remember what Gvasalia said about the intentions of his work in his debut Fall 2016 show – “a series of couture attitudes transforming a modern, utilitarian wardrobe. How to place Balenciaga’s legacy in a new context.”

Today’s collection emphasized the prevalence of shapes with the use of heavy and overwhelming fabrics.  The Balenciaga heritage thinking now morphs into new processes of innovative pattern drafting, cutting, assembling, and finishing these Spring 2022 garments. From the opening look of a black long black tunic and below-knee skirt with a face veil to the red long sleeve sculpted flare ruffle dress as a tribute to the drag performer Divine’s red dress worn in the John Water’s 1972 film Pink Flamingo, the collection is all about shapes. The perception of fashion can change with the changes in these proportions.

Manifestations of the deconstructed tailoring with jackets like a black single breast black wool shirt jacket paired with a knee-length skirt or the black double breast with side pin closure with loose pants or the black rectangular cut four patch-pocket shirt collar pantsuit demonstrate the specific craftsmanship with alluring silhouettes both close to and away from the body. The exaggerated lengthened sleeves alter the exact proportion of what could have been a classic patch pocket pantsuit.

Each of the garments shown is a remix, a rework, and a repurpose as the prevailing clone theme. The bright floral print dresses that first appeared in the Spring 2017 show are now reprised as multi-canvas colored long sleeve dresses or pink floral logo loose fit shirt dress paired with black leather thigh-high boots. The giant parkas’ first appearance in Fall 2018 is now present here as a red and black puffer coat with a massive play on folding collars, a particular area of the house heritage work. The yellow pleats long dress with a cocoon overlay is a standout.

With an eye to the brand’s diverse customers, Mad Max-style denim workwear in grey or bleach denim worn with red hooded BB logo sweatshirt or a black sweatshirt with the Simpsons decals. But in this version, the Simpsons family is wearing versions of Balenciaga clothes with Marge in a high shoulder black dress, Bart in an oversized coat, and Lara in a sheath dress. Presumably, the dog Santa’s Little Helper is wearing a BB Gucci leather collar.

The four streamlined evening looks, three in black with a severe fitted silhouette and the finale red long sleeve ruffle puff dress, probably signal what may be coming for the first haute couture Fall 2021 show in the first week of July.

In the continuation of the Hacker Project first seen with the Gucci Fall 2021 Aria collection that Alessandro Michele showed in mid-April, the Balenciaga double B logo replaces the Gucci’s double G logo with iconic tone-on-tone leather bags and accessories. The BB belt in Gucci brown leather print will surely be a best seller in the small leather goods category. A limited-edition hand tagged This Is Not a Gucci Bag will be in stores around November 2021.

This Balenciaga metaverse show exemplifies the innovative adaptation of new technology to create the fashion experience and how to present fashion beyond the traditional live fashion runway shows.

Great fashion designers intrinsically understand that fashion is an intricate part of cultural-social-political integration in the broader society. How they see and design the clothes is part and parcel of all the convulsions and evolutions of ideas. The French designer Jean-Paul Gaultier imagined today’s impact of diversity and inclusion and foresaw the world decades ago in the mid-1980s with the kind of fashion that mixed ethnicities, genders, and social codes, breaking with the old ways with clothes signaling the new horizon.

It was not the first time that Gvasalia has immersed his audience within the tech realm. The décor of the Spring 2019 show at the television production center featured an onslaught of green computer-generated imagery inside a video tunnel to mimic the inner working of the machine mind. Instead, it is a continuing conversation on how to see fashion not just as clothes but as a cultural process of appropriation, authenticity, and authorship.

“My work explores new technologies and how our society, our consciousness, our interrelationships have changed,” said Jon Rafman, the digital video artist who created the show stage set, said at the time in September 2018. The artist could also have said how new technologies are changing the concept of fashion shows.

Technology has a way of easing the sense of class prevalent in the fashion system, particularly at the elite luxury level. Deploying technology in this manner of a sort of fake news showing, Gvasalia has in a way made the show itself felt a bit less precious, and a bit more of that belonging to more people than to the few.

There are quite a lot of debates about how fashion shows are returning to the old system of traditional runway format at this juncture. Without anything real but the garments, there is no denial of the marketing impact of this Balenciaga release if this remains a primary consideration for a live presentation with audiences. Lost in this debate of the rapid return starting in a few weeks are the roles of creativity in crafting the format that best works rather than sticking to old formulas.