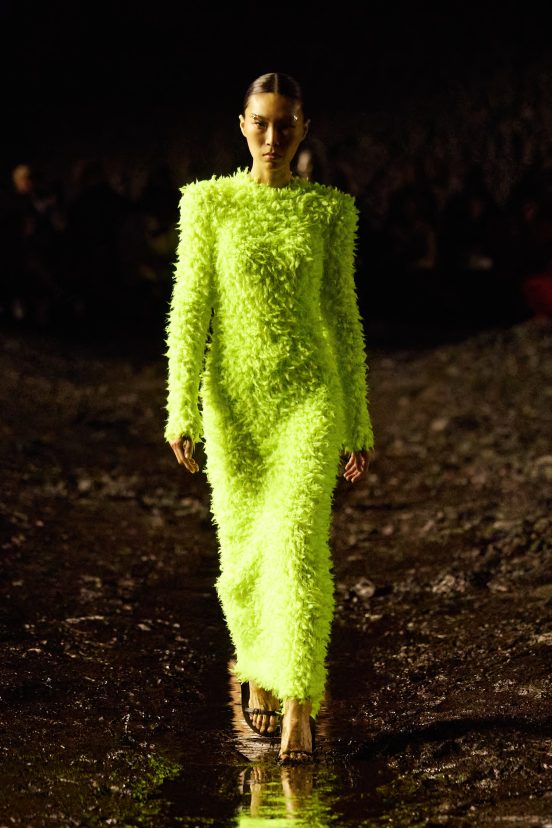 Dystopia is not a Dirty Word at Balenciaga

Fashion has always been a mirror to society, and with today’s Balenciaga show set on muddy terrain, Demna may have been signalling this as a sign that there are more dark days ahead. Is this something we need right now, and isn’t fashion, especially in a summer season, meant to provide a form of escapism? Alternatively, the designer may be choosing to address todays challenges head on, by evoking an emotive response through the placing of his version of luxury in a barren wasteland.

Opening up for Balenciaga was Ye (formerly known as Kanye West), in what is likely to be one of the most talked about moments of Paris fashion week. Which after bringing the first – and probably last – Gap x Yeezy collection to fruition and having managed to escape being in his line of fire, Demna scored one of the coups of the season by convincing him to walk out first at the show.

Looking like the thaw which followed last season’s snowstorm, mountainess heaps of mud were formed in peaks to make up todays set, which the designer later commented was in fact a metaphor for “digging for the truth”, and another dark turn on his road to dystopia.  It has been a curious thing to watch designers this season collectively ignore the brief (spring summer anyone?) and jump forward into fall or at the least a transitory season that leans more into the latter half of the year.

Streetwear, sports, and skin-tight were all present and correct, but to even use those terms to describe the collection goes against the mood Demna has been in of late, as stated in his show notes “Luxury, not luxury, street, couture, good, bad, buzz, viral, all of the same, who cares. Putting luxury fashion into the box of polished, exclusive, and visually expensive is limited and pretty old school”

Choosing to now, no longer explain his collections, verbally or otherwise, he is leaving it up to the individual, and those who get it, will get it.  So, what else is new? First off, we had corsets and baby-carriers for the boys, as well as embellished tops which could be said to reference how the Gen Z customer wants to dress now and the move to create fashion for all who want to wear it.

Known for his love of the oversized, silhouettes were sent out with a play on proportions, with the most interesting being the fitted body and wide leg combination which became a formula that owes much to the #y2k revival.

An end run of seriously good gowns closed the show (sans a leather-clad model who was reminiscent of Edward Scissorhands), and outside of the embellishment there were easy-to-wear simple tank style dresses and a way to stand out if ever there was one in a fluffy neon knitted dress, which offered the only bright relief in a collection which erred on the dark side.

Fashion in its best case scenario should not need a story to be sold to someone. You either like it or not