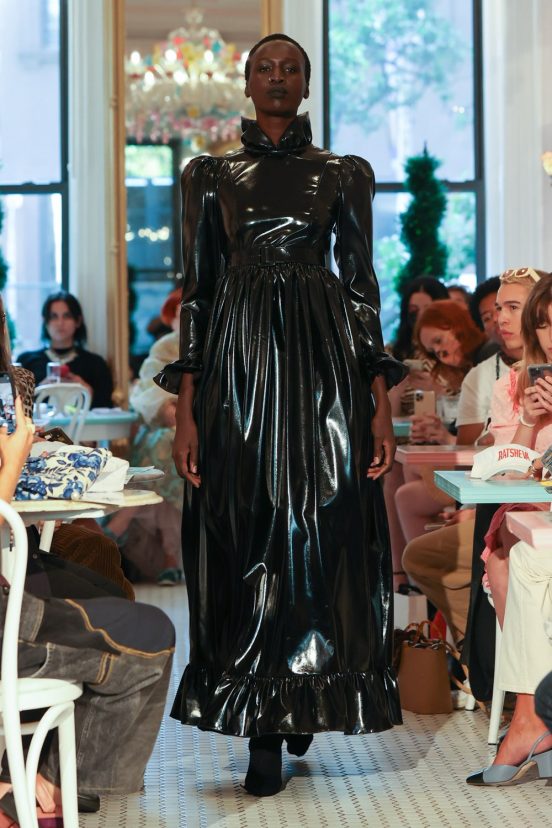 Kitsch and Color Clashing as a Designer Mistakes Anachronism for Subversion

The bright pinks, vintage light fixtures, and eclectically kitschy decor of Serendipity 3 – an Upper East Side mainstay serving up french fries and frozen hot chocolate – set the mood for Batsheva‘s Spring 2022 collection, which rivaled the digs in its intentional campiness.

What began as a personal project for then-amateur designer Batsheva Hay creating distant-throwback house dresses soon morphed into the label that has come to define the cottage-core trend for high-profile customers.

Into the mix of Victorian and prairie dresses Hay has thrown late-50’s soda-fountain and diner style. Main sources of inspiration are John Waters’ Hairspray (as if it wasn’t obvious, gigantic wigs are there to remove any scrap of doubt from your mind) and grandma’s bedspread.

For the most part, the half-decade-plus-old styles are left unchanged. Anything resembling a contemporary sense of exploration or experimentalism was left up to the garish color combinations, which combined neon green and orange, purple, and brown.

There were a few pieces that felt like moments in which the designer actually began to reach toward transcending her source material instead of merely regurgitating it – especially the final black latex dress – but this piece stands out by actually saying something and having a purpose today in a collection the rest of which largely does not .

As Susan Sontag famously recognized, the thing about camp is that, if it’s trying to be camp, it isn’t. Without the creative sincerity that accompanies the creation of a new work of art, a new style, its reproduction falls into kitschiness. While Batsheva’s interest in bygone design staples of womanhood are certainly sincere from a design perspective, they don’t give anybody a reason to wear one of these dresses when the same thing – but with actual history to it – can be easily found in a vintage shop.

Celebrating the antiquated styles that accompanied antiquated ideals of femininity and womanhood is certainly not the same thing as celebrating those ideals, but it isn’t subverting them either (and no, finishing a look off with Doc Martens does not instantly make it punk). These looks don’t say anything about contemporary womanhood except that it looks different from the past. And frankly, they were left in the past for a reason.