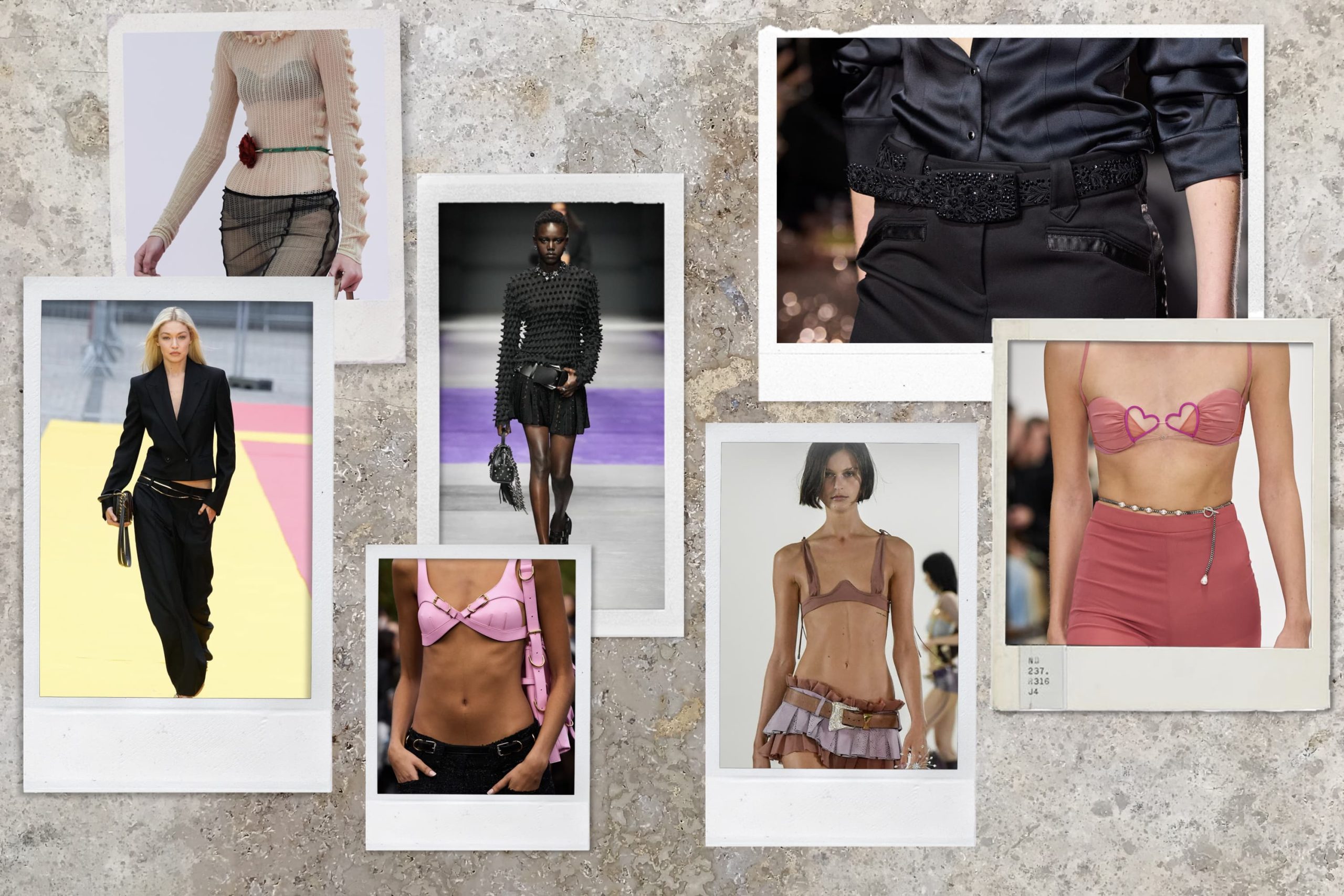 Waist and hips have created plenty of attention for the S/S 23 season,

Several designers create covetable belted designs that focus on the ‘female’ form. From 60s inspiration to the 80s and Y2K influences, the statement belt, whether handcrafted or tailored, provided many of the finishing touches to outfits. Materials such as coins, braid, rope, and pearls are the leitmotif of these creations.

And at Altuzzarra, the designer drew inspiration from the world of the desert and the spirit of travellers and sent out items wrapped around the waist, embellished with hammered gold discs and silver beads.

Crafted belts at Alberta Ferretti were created from plaited strips of leather and finished at the centre front with a ‘nature’s treasures’ stone, while at Maryam Nassir Zadeh, leather and satin wound together to create long-length fringing. Olivier Rousteing at Balmain creates an inspiring waist focus iteration with a wider-than-wide wooden version and another with knotted leather details.

Body jewellery makes a return. Nensi Dojaka cinches the waist with an authentic 60s revival with a delicate chain, barely-there pearls, and a pearl drop to complete the look. Acne’s cinched-waist version keeps the idea of a thorn between roses alive in a spiked version with a blood-red rose secured at the waist.

The vibe is sexy, with a euphoric upbeat tempo transcending Fashion Month.

Silhouettes came exaggerated at the hip by oversized utility pockets, surrealist belts, low-slung provocative pieces, and classic tailored versions; not a hip was without some attitude.

Poster Girl went all out with models sashaying on the catwalk with slim-hip-revealing pieces that spoke volumes of the Y2K influence. The Aquatic theme that bubbled up to the surface came to the fore in a starfish accoutrement at David Koma, while at Versace, Donatella Versace’s Goth girls came with devel-may care, tough, wide hip-slung leather pieces.

The new designer at Etro, Marco de Vincenzo, and Michel Kors, presented retro-inspired versions. Etro’s narrow-colored leather came with gold clasps and loose chains, while at Kors, sexy 70s-inspired silhouettes were complete with oversized gold clasps. Stella Mccartney sent a whisper of a double-wrapped gold belt around superbly tailored black trousers, and Rokh belts were just classic leather to wrap around the waist or wear singularly over the hip.

The cash and carry trend, made famous by Elsa Schiaparelli in the late 40s, obviously inspired Miuccia Prada at Miu Miu to dress her silhouettes with large utility pockets that were as functional as belts as they were abbreviated skirts! And finally, Nicolas Ghesquière at Louis Vuitton played with surrealistic volumes presenting exaggerated leather belts and cropped tops sporting a belt as the hemline.