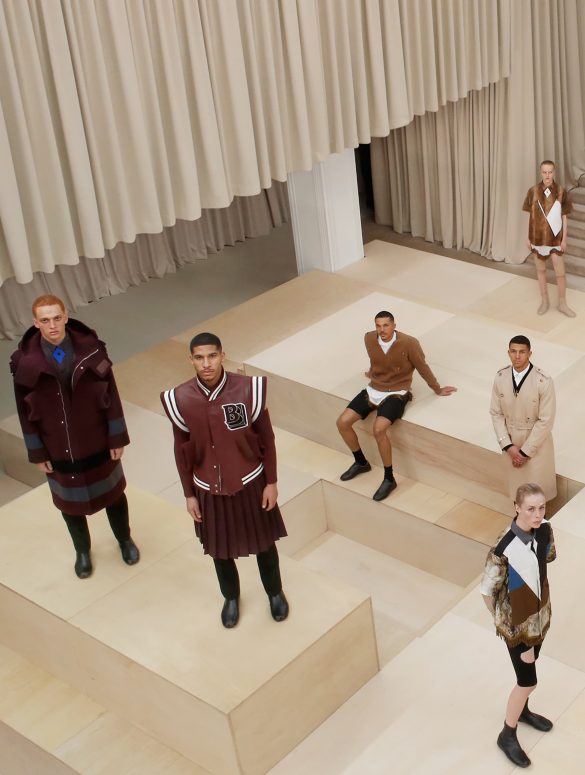 ESCAPES
Camel Pleated Skirts, Black Leather Legging Boots, and Hints of the Past

One of the prequel to this standalone men’s fall 2021 Burberry show is a twelve second black and white close-up video of several different hands sowing with white threads the ecru linen label for the presentation with an emblem for Wilderness at the center and words like Eternal, Kinship, and Fluidity in the outer enclosed circular rings. The other short teaser showed a male model running from the woods to London’s center and eventually ended up at the Burberry’s flagship mega-store on Regent Street, where the actual taped physical show took place.

Both of these short teasers serve the purpose of galvanizing the Burberry community across the globe with the message of ‘kinship’ and ‘fluidity’ as Riccardo Tisci, the brand’s chief creative officer, first attempt to define what is menswear at Burberry in this first men’s show since his arrival in mid-2018.

By separating his menswear into a standalone show, Tisci and Burberry can capitalize on the growing men’s market by supplying a more robust and more consistent aesthetic that young male consumers can experience from the brand from sneakers to leather bags and the raincoats or parkas or in any collaboration drops.

Creatively, this Burberry men’s collection attempts to stand on both sides of the fashion equation – cool and highly commercial clothes at the same time. That’s an enormously difficult task, especially for a large global public company on the London stock exchange.

“I wanted to celebrate the freedom of expression. Enclosed indoors, I dreamt of the outdoors and its beauty, fuelled by the thought of the creativity that comes when we are together. With this dream in mind, I became fascinated by the widespread British craft and outdoor movements of the early 20th century, when people escape exploring the unknown countryside. They formed communities with a deep respect for nature and the outdoors and looked forward to a future full of possibility. I was not only drawn to the artistry of their craft, colors, and shapes but also their strong sense of camaraderie and friendship,” Tisci said of his thinking behind this collection with a great range of outerwear.

Unlike the massive outdoor and art curated show last season in the forest, this time though, the show took place inside the flagship store with the set as the rigid new wooden structures with wavy camel curtains, framing the models and their clothes in this enclosed and so immaculate space. The show felt less artistically defined in the staging and clothes that don’t communicate central aesthetics. Or, maybe it was the technical crew following the models with their steady moving cameras making sure to catch every detail of the clothes up close, of course.

The show opened with a reworked of the classic Burberry trench – this time as a trench-blouson combination, aka a trench front with a blouson back in an asymmetrical construction paired with a grey shirt, a camel fold knee-length skirt, and a light grey furry long lapel vest. Then a second model followed, wearing a sleeveless dark olive khaki shirt with a rusted star imprinted in the front, a multicolor sweater wrap in the front at the waist, and a camel skirt and black leather thigh-high boots. This shirt look has the rigid panels adding onto sleeve separation of the shoulder blade, adding a bit of protruding volume. In the end, another variation of the trench emerged – like a camel v-neck double breast coat.

A baseball wool varsity red and white blouson with ‘sleeve’ pockets and one sleeveless appear towards the show’s end.

Elsewhere the Burberry classic trench also manifested in black made with fringes at the bottom and the sleeve trims. In its entirety, though, Missing is the Burberry tartan patterns, perhaps not needed in this show collection.

Perhaps in rendering the obligatory homage to the age of genderless, two women models wore the decorated patchwork short with mustard fringes. Maybe this is unnecessary here since the clothes here are not really of the unisex types– of course, as anyone can buy them when available next fall. The show is more potent, just as a men’s fashion show.

What is the overall message here that can be filtered up and down the Burberry food chain?

Despite the strength of the outerwear, this show seemed less like a complete collection. It has a singular viewpoint, but one not developed in terms of the clothes. Perhaps seen in another perspective, it is like putting too many ideas into one show so that no one particular notion prevailed. It’s not entirely clear how the patchwork shirt with asymmetrical patchwork and fringes fit into the outdoors’s image.

That said, the show’s mood was more of a study of fashion, in this case, the presentation of a new collection in a more mechanical manner. Tisci has always managed to draw the audience, live or digital, into an emotional state, an emotional reaction to the mood and the actual clothes. Now

The romanticism and the sense of sensuality are both absent here, despite the macho stand of a sleeveless black shirt-skirt combination dress worn with black thigh-high boots.

Is male sexiness out in the era of gender fluidity?

I have seen all of Tisci’s men’s show at Givenchy. In that debut for Spring 2009 in the late June 2018 fashion show at the Musée Bourdelle, guests sat among the majestic statues listening to the San Francisco Symphony Orchestra’s soundtrack playing a take on Metalica’s music, submerged in the emotion of the moment. The even special composed music commissioned to the British composer Peter Gregson exclusively for this show didn’t stir emotionally.

A great deal of the silhouettes seen here in this show – the skirt, the thigh-high leather boots, the fringes, and the oversized parkas – comes directly from Tisci’s work Givenchy men’s collections. These are the looks as put together here that the designer himself has made into standard lexicons a few years back. The skirt’s variations were principal tenet that ran through his near-decade of men’s collections at the French house. Even the sweater’s tying around the model’s waist recalled the Givenchy men’s fall 2013 show. This is more Tisci’s Givenchy than it is Tisci’s Burberry.

If this show were meant as an exercise in transformation starting with the top-down aesthetic rejuvenation, the show might not have delivered on this single premise, even in a highly focused way. For example, one can feel the tensions between the designer’s conceptual leanings and the reality of a massive public enterprise on those patchwork shirts.

It isn’t clear what the central aesthetic is from the clothes and how it can filter down to the brand’s commerce’s multiple categories.