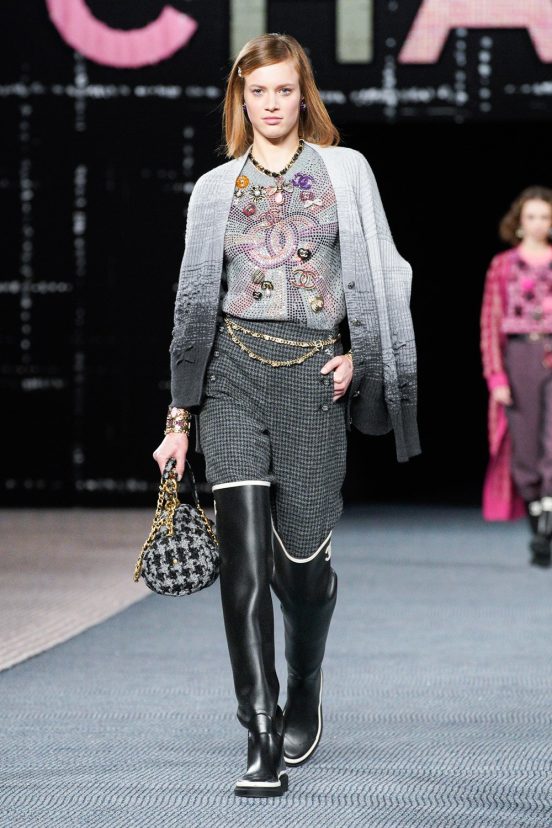 Blow Away The Cobwebs

Tweed first entered the Chanel vernacular in the mid-1920s, when Coco Chanel took a trip to Scotland and borrowed a jacket from her lover, the Duke of Westminster. She found herself enamored with the soft, comfortable and robust material alongside the Scottish scenery and so returned to her Parisian atelier, asking them to recreate tweeds in wintery shades that reflected her love of the Scottish Highlands. Not before long, the look became her signature, with a tweed suit first appearing in her Paris show shortly after. The rest, as they say, is history.

History repeated itself today at the penultimate show of fashion month, but is the history of the past better than the dreams of the future?

As a British person with Scottish in my blood, the collection did at least make me feel homesick. Of course, a month of travel will do that to anyone. But there was something in the wellies, the cardigan dressing, the oversized coats, chain-laden hip-flasks and ‘raid grannies jewelry box’ necklaces that made me think of the British phrase: “Blow away the cobwebs.” For those that aren’t familiar, it means to “banish a state of sluggishness; enliven or refresh oneself” (usually in association with a lengthy ramble after a few-too-many the night before.) It’s a British tradition, generally involving alcohol, made charming via an idiom.

Famously, the Royal Family’ blow away the cobwebs’ every Boxing Day, and I imagine them here in their walking attire, rambling through the countryside of the Balmoral estate. It’s giving: Kristen Stewart in ‘Spencer.’

But is Virginie Viard succeeding in blowing said cobwebs hard enough to give this look legs for the future? At times, some of the looks felt a little ‘fuddy’, more Princess Anne than Lady Di, if you will, (hopefully I’ll be allowed back into the UK after publishing this!).

There were times where she truly succeeded: take for instance, a scoop neck knit dress or the long, buttery leather coat in gorgeous caramel colors.

A three-piece black-and-white trio with a strong shoulder profile was endlessly chic, the same applies for the off-shoulder bustier dress in the same colourway.

However, the jumpers sat a little strangely with me, reminding me of old home-moves from the 80s or ironic Christmas party attire. Somehow the models looked like they should have had a bad perm and lycra leggings rather than the chic bob and (very good) tailored trousers to match.

There are signs of Viard slowly steering HRH Chanel into the future. Take the micro-bags that fit goodness knows what – but everyone will want one.

The same applies with footwear, which will undoubtedly be as big a hit on the streets as they will in the Scottish countryside. We know Viard can take on the house codes and work them for the future; we saw it in action in her first outing for the brand which reinvigorated the label with a vigor and a new air of chic. Glimmers of this were seen across evening wear that saw their iconic tweeds reinterpreted via textured embellishments – but only a handful – they left me wanting more. And I’m clearly not the only one.

There’s definitely an appetite for Chanel. The brand keeps hiking their prices to cater to an ever more luxurious market. No doubt this will deliver that iconic Chanel look with a dash of British irony: surely that’s the best of both worlds?