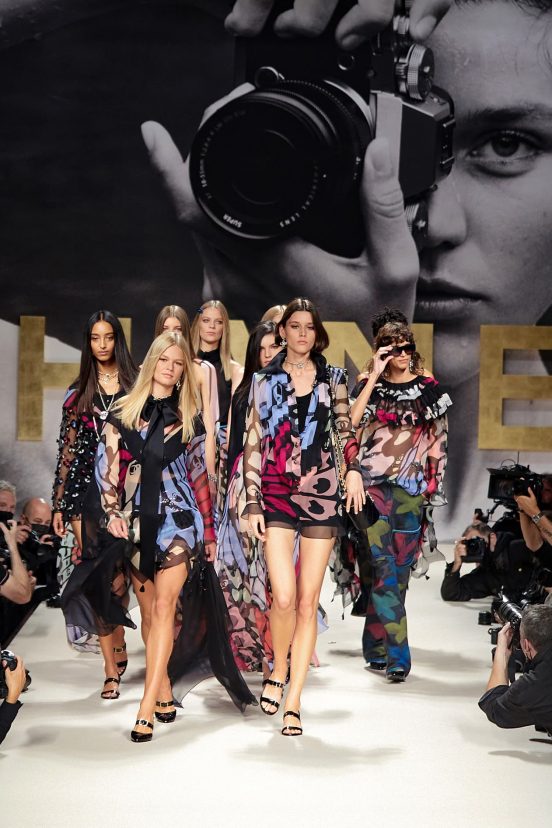 Memories Spark a Collection with Youth in Mind

The prominent French hit Aline of summer 1979, reinterpreted by Jarvis Cocker from the original song by the French pop singer Christophe. His voice passionately doled out the words and hymns so familiar for the youth of that summer, blasted on the soundtrack. This song Aline went platinum in France that summer, selling million plus 45 singles. Photographers lined around the runways taking pictures like in the late 1990s, as models in their black two-piece swimsuits and short white heels took their turn paraded on a white skinny high raised platform inside this tent.

Outside torrential rain downpour soaked the street at the end of the Champs de Mars on the opposite end of the Tour Eiffel.

That hit song Aline told the story of a drawn face on the sand being washed away by the rain erasing the drawing disappeared. The clothes here are like the memories after the storm had washed the sand.

And it wasn’t just the photographers gracing the edges of the runway, clicking away like it was in the decades back then. The models, too, had that big hair and full makeup look on top of the way they sashayed and posed like, well, like old times. They swung their hips back and forth and posed at the end with both hands on their hips, giving it all to the photos.

The camera is that object of obsession for which fashion cannot exist “because fashion is about clothes, models, and photographers,” Virginie Viard, the creative director at Chanel, said. For maximum impact, the duo Inez & Vinoodh had shot pictures and short videos of Vivienne Rohner, Lily Rose-Depp, Alma Jodorowsky, Jennie, Rebecca Ryan, and Quannah Chasinghorse-Potts. In black and white videos, they held cameras on the giant monitors at the tent entrance, greeting the small audience.

It’s a magical object and a sexy gesture, which evokes so many memories. I used to love the sound of flashbulbs going off at the shows in the eighties when the models were on a raised runway. I wanted to recapture that emotion,” Viard said of her thinking behind the staging and the Spring 2022 collection. And this moment of flashback happened just less than half a day after the Facebook and Instagram blackout in the US and in many parts of the globe, a momentary harking back in time.

The clothes in this Spring 2022 collection did not feel nostalgic for all these nostalgia talks and ideas. Instead of the black and white cotton bathing ‘suits,’ the colorful Chanel cotton tweed suits are now also cut in the midriff and as a three-piece suit with a tank bra and matching running shorts underneath, and the range of colorful print light chiffon dress towards the end of the show. The logo bathing suits recalled a Spring 1993 show in that distant past only archivists would reminisce.

There is a lightness and a carefree attitude here, and that’s new.

A lot of very simple bathing suits in gold or white with black trimmings. Short dresses in pink or mauve tweed, fishnet skirts, jacket embellished with multicolor crochet, and denim suits. There are also a lot of prints: big, colorful butterfly wings on black chiffon,” Viard said explicitly of the clothes.

It was all good old fun and a great revisit but not a recreation of the past, of memories and some youthful new clothes from Chanel for next summer. These clothes are as light in spirit as they are on the girls inside this temporary site, the Grand Palais Éphémère. A few of these ‘simple swimsuits have black sheer chiffon skirts or long pants overlay, making them look chic perhaps for wearing beyond the beach area.

With all the gestures pointing towards the past, was it too retro? Or was it that the 1990s allowed Viard a freer hand in this collection? It would be myopic to see this show as retro or only as a look back when it is just an excuse to push forward to embrace young women today.

I have seen all of the Chanel ready-to-wear and haute couture shows since the mid-1990s, and I don’t recall these exact clothes recast for today’s outing but perhaps some of the ideas came from a different time. Though specific, many Chanel signatures are always on every Chanel runway show, give and take, depending on the season. Sure, now, fewer spring shows have a bathing suit since these vestments are relegated to a resort season collection and often not shown at all. Regardless and always, all the Chanel fundamental garments always make their appearances every season.

Perhaps one of the show looks resembled a remnant of the 1990s – the crop white logo tank with a black bikini, black loose-fit trousers, and the metallic belt. Logomania was born back in that era.

But, the several iterations of the classic skirt suit are now actually linear short sleeve knee-length dresses in multicolor stripe jersey with the trompe l’oeil of a suit.

Yes, the white and the black lose double breast coat/dress look more for older women than the rest of the collection, but it isn’t the worst thing to have a few looks that the older consumers can look at and say, well ‘that’s me.’ Or, for that matter, the range of flowing black print chiffon dresses at the end to the tunes of George Michael’s Freedom from the year 1990.

As in the collections I have seen from Viard, new design elements are easy to miss. Here a light, bright pink four-patch pockets front buttoning coat/dress has added side panels that hang down on the side and wrap around onto the entire back of the garment. This new design element is also seen on another pink plaid cardigan skirt suit, although the side panel on this jacket is more pronounced and in double-layer, adding some weight. This side panel doesn’t seem to serve any functional purpose just for aesthetic reasons. The design doesn’t always require a purpose or a function.

Here is another fundamental to consider. One of Viard’s most crucial missions at Chanel is to transit the brand to the younger women – the next generation of consumers now coming of age. Is the way to reach them through pelvic cut-outs? Maybe yes or not, but think about this – is the brand too venerable to trespass into this style territory?

Pivoting to youth isn’t an easy task, and there are no given paths.

In previous collections, Viard has tried to mix in more youthful looks within the range of more classical clothes part of the Chanel customer base. Sometimes it works, and sometimes it feels slightly awkward, like being stuck in between two worlds. This time, though, the designer succeeds in this slow transformation with a bit of help from pop music hits from decades back.

It’s less about showing a few of these skin-baring midriff jackets and skirts or the three pieces separates allowing maximum skin exposure than creating a comprehensive platform of ambassadors from around the globe who evinced their local communities. Until recently, most people don’t know who Jennie, Angèle, Charlotte Casiraghi, Whitney Peak, and Victoria Song are, but these kids represent Chanel in global capacities.

Less also is the idea of the elaborate staging constructed under Lagerfeld. That now seems to be left in the history books and for those interested in legacy etc. But, there may be something else at work in using this idea of a runway situation from the past surrounded by photographers snapping away while audiences were supposedly looking at the fashion.

The photographers’ idea brought back something from the past that most people today in the digital age either don’t know or didn’t experience – that of slower fashion. Back then, there were no instantaneous postings of any kind. Fashion back then was like a share of knowledge – conversations, discussions agreed, serious disagreements, and love and hate.

There is something else about all these temporalities – the show space is a stand-in during the renovation of the actual Grand Palais and this Spring 2022 collection. Well, it’s just that fun collection for next spring. The clothes, too, are temporary, meant to exist for that short time frame at the brand retail stores globally. Then, they are gone, leaving space for another season’s arrivals.

Fashion seasons are like the actual season, new flowers replacing dead branches, and the cycle continues.