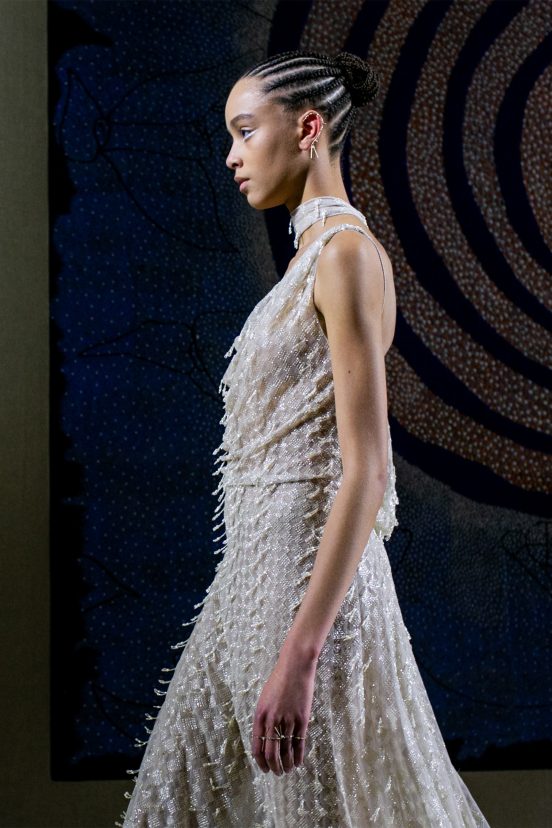 With her purity of vision, thoughtful applications of timeless craft that synthesize categories of ornamentation and structure, and consideration for physical presence, Chiuri’s creative vision for couture is here expressed perhaps stronger than ever before.

Returning to and developing on a collaboration from last season, Chiuri once again commissioned for the show’s backdrop and staging wall-to-wall embroidered panels created by the Chanakya ateliers and the Chanakya School of Craft based in Mumbai, India.

Embroidery also formed the focal point of the collection, and this season the creative director pushed it further, embodying a mission to show that the timeless technique is more than a method of ornamentation and adornment of an otherwise finished piece, as it is often considered, and is a craft that can exemplify the creation and purpose at the heart of the atelier.

Thus, embroidery takes a primary position in the construction and visual identity of garments. Canvases of sheer fabric are painted with thread, creating constructions and patterns that play central roles in clothing’s function to dress the body. Embroidery glides along the surface of a piece and rises from it, occupying space. With exaggerated and variable thread lengths, tassels cascade down gossamer dresses.

There’s no lack of graceful solidity to the collection either, however, as Chiuri explores the elegant possibilities of fabric itself. Woven between looks characterized by glitter and embroidery are sculptural jackets and fluid dresses and skirts that exude the pure simplicity of a single brushstroke.

Chiuri also displays a mastery of other ways to transform a two-dimensional cut of fabric into a piece that lives through three-dimensional space, like plissé and reverse seams.

Light as a feather, the color palette is kept to an airy minimal, with white, ecru, silver, black, and gray that sometimes creeps ever so slightly towards a soft blue.

This timeless minimalism of color and clarity of form creates an unmistakable juxtaposition to the embroidered artwork it is positioned in front of, which joyfully combines the impactful colors of pop art, the organic reverence for mystery and the natural world of religious and tribal art, and the cubist deconstructions of late modernism. It’s hard to say whether this artwork draws out a universal, unifying, and uplifting character from the craft of the collection, or if its colorfully raw exuberance and outsider status stands in sharp contrast to the collection’s frigid and timeless impeccability.

Whether or not the collection expands beyond itself and conveys a universal expression of the oneness of craft and art, as Chiuri hopes for it, it remains in itself an exquisite body of work: a living, moving testament to the power of human vision and the grace of human hands.