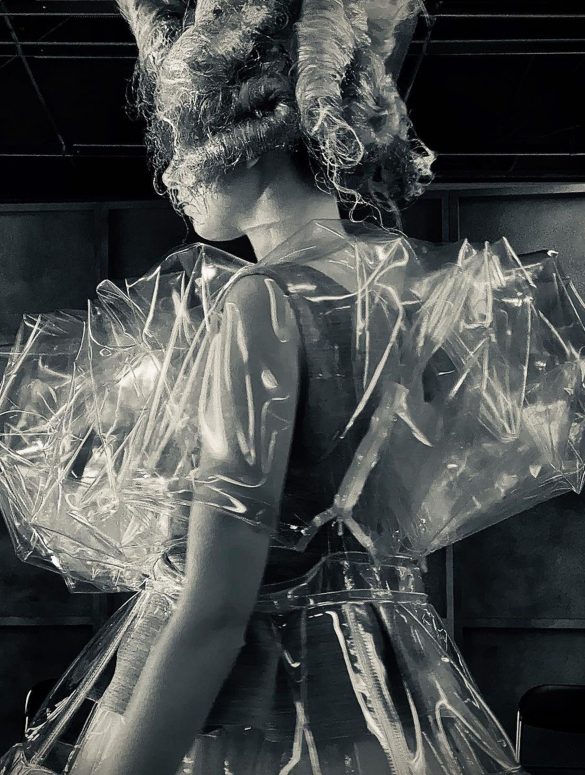 The Sound, The Fury & The Clothes

William Faulkner, the American novelist, published his fourth novel The Sound and The Fury in 1929 to initial lukewarm reception. Told in four parts from multiple perspectives, often of the same events using experimental writing techniques such as the combination of numerous disjointed narrative styles including stream of consciousness and nonlinear storytelling, the novel chronicled the tragedy of the Compson family – a grand Southern Mississipi family in Jefferson on the verge of total dissolution – from the perspectives of the childlike man Benjy, the rebellious Caddy, the offbeat Quentin, the cynic Jason and their black servant Dilsey. The struggles of the Compson family as they fell from the perch of their once upper-class status into chaos and financial ruin foretold a larger society breakdown in the forthcoming depression era then and is also reflected in much of the ongoing crisis today.

Akira Kurosawa, the Japanese filmmaker, released Rashomon, a psychodrama crime film, at the end of the summer of 1950 and received an Academy Honorary Award at the 24th Oscars in 1952. The film’s central action plot, the murder of a samurai and the rape of his wife, were recounted by four of the protagonists – the woodcutter, the wife, the bandit and the ghost of the murdered samurai – all were active participants in the action and the narration of the same event with different perspectives.

In his 1949 Nobel Prize in Literature acceptance speech, Faulkner said that writing must come from the heart “leaving no room in his workshop for anything but the old verities and truths of the heart, the old universal truths lacking which any story is ephemeral and doomed – love and honor and pity and pride and compassion and sacrifice.” In lieu of words that Faulkner evoked from the heart, Kurosawa worked together with his cinematographer Kazuo Miyagawa to put on screen the human emotions and feelings with stark images in breathtaking scenes in the rain, the heat, the sun, and the shade of the near partial tropical forest – the audience could feel the woodcutter’s journey into the woods with direct shots into the sun casting sharp contrasts against the leaves and against the travelers. In a scene of a struggle between the bandit and the samurai where the movie audience could hear and see their breath and their fear, the emotions evoked were so powerful and hard to contain within the cinemascope theater screens.

Verities and truth from the heart and evoking powerful emotions are descriptives often used once in a while to describe the feeling and experience of certain fashion shows that managed to invoke these emotions in rare cases. Fashion shows are neither literature nor cinema but certain shows can bring forth the drama much in the way these ‘dramas’ are viewed on Netflix.

I can say that looking at this spring Comme des Garçons mini show staged half a world away was much more like seeing a film where the clothes are the actors not a fashion short film. In a real-life show, the experience would be far different – the live ambiance isn’t replaceable in any way looking at a screen. That’s why I think perhaps looking at these clothes and their dramas through the lens of literature and cinema may offer a different view of them.

Interpreting each Comme des Garçons show and detecting what the pulse of the clothes can mean depends on what the observers see and what these experiences of seeing reveal about what was being seen – the clothes. Just like how the bandit, the wife, the samurai, and the commoner each told their versions of the same events albeit each in their different manners of perception, the designer Rei Kawakubo is like Arika Kurosawa in the way she would give us a suggestion – sometimes a word, sometimes a phrase, and on occasion an entire paragraph to which we can liberally interpret the enigma.

On its Instagram page, Comme des Garçons posted several pictures right after its mini show with a model in the different outfits standing inside an empty space with two rows of socially distanced plastic folding chairs, but empty chairs prior to the arrival of the very limited number of show guests. The empty chairs are there for a reason, placed strategically and symbolically – they are meant to telegraph the idea that our interpretations of what we will shortly see will vary accordingly – and they should.

The word this season is ‘dissonance’. In fact, there was an entire paragraph to further this explanation – “The human brain always looks for harmony and logic. When harmony is denied, where there is no logic, when there is dissonance … a powerful moment is created which leads you to feel an inner turmoil and tension … that can lead to finding positive change and progress.”  In a nutshell what that said is that for fashion and for this spring collection, the ‘turmoil’ and the ‘tension’ that caused the erosion of logic and reasoning is making the heart even more critical to bring forth the kind of fashion that elevates us and perhaps also enchants us, just like how Faulkner said words in a novel must come from the heart.

Dissonance was the word that emanated from the CDG headquarters as a way of providing a guidepost of the thinking behind this collection. But does dissonance actually describe the clothes or the audience (us) or actually both? It seemed clear to me that in looking at these clothes, the tragedy now is us and not fashion.

Observing these Comme des Garçons clothes from afar and not directly is akin to actually seeing them as playing main characters like real actors in a cinema setting, where the action occurs on screen and not in a live performance or show. What is portrayed on screen has to be powerful enough to bring the audience, or in this case an audience of one, to our ‘feet’.

At these recent CDG shows, the clothes spoke for themselves. In this mini show under a red light at the Tokyo headquarters, these twenty outfits are the main point and the focus of the masterful craftsmanship that rivals any work done at any Paris couture ateliers – something that unfortunately was never bestowed or acknowledge for Kawakubo and her team in Tokyo. Just look closely at the constructions of the black wool giant gown with folds in the front and belted with a plastic waist belt, or the black plastic cape over a black and white printed corset and a white plastic lace patterned crinoline skirt – they may look slightly ‘off’ with less of the luxury feel because of the deliberate use of the prints and plastic fabrics. Or the two dresses at the end of the show: the white strapless dress with clear plastic overlay, and giant sweatshirt with side pockets and the white short-sleeved tiered ruffle dress with plastic overlay.

The dramas nested on these outfits arose from the clashes between the entanglement of the spirit of haute couture processes and the ‘disruptions’ by the use of Disney prints designed by Kawakubo (used previously in other collections like Comme des Garçons GIRL) and the use of unexpected fabrics as well as in their illogical combinations and juxtapositions, not to mention the random graffiti ‘interventions’.

The surfaces of these garments are in a way similar to the skins on the faces of the actors in Rashomon, especially from the scenes of sustained struggles between the bandit played by Toshiro Mifune and the samurai played by Masayuki Mori, or when the wife played by Machiko Kyo enters the scene and taunts both these men.

This show was much less about intellectual curiosity than some in the recent past – these clothes evoke our senses rather than our intellects. Our feelings and emotions aren’t always the result of logic and reasoning but perhaps the breaking of reasoning this season, in this current atmosphere. The clothes though are as far from dissonance as they can be with each outfit a work not of high brow concepts, but they are actual garments made by allowing the erasure of established notions in terms of using design and materials often contrary to each other.

The sense of the tactility of the clothes – the folds, the volumes, the shiny and opaque fabrics, the unusual partial prints like that of the textures of the shiny transparent plastic puff-sleeved long dropped A-line dress with a Mickey Mouse printed underdress was so vivid – it looked as if the outfits were trying to escape from the screen to give the audience that intuitive sense of real physicality in this omnipresent digital, and perhaps verging on disposable, culture.

The interruptions (disrupted) mentioned can be seen also as the problems of the pandemic intruding into fashion at all levels, from design and conceptualization to commercial production.

But here Kawakubo only showed how creative fashion remains the answer, the only plausible answer to the crisis that is facing all of us. She is doing it this way because her fashion is her heart and her passion.

These precise clothes are the symbols of the optimism of fashion, that it is designs coming from the heart that always carry fashion to new horizons and like the crying baby that the three men found at the end of Rashomon, there is hope when the woodcutter took the baby home to raise as the sun shone overhead.