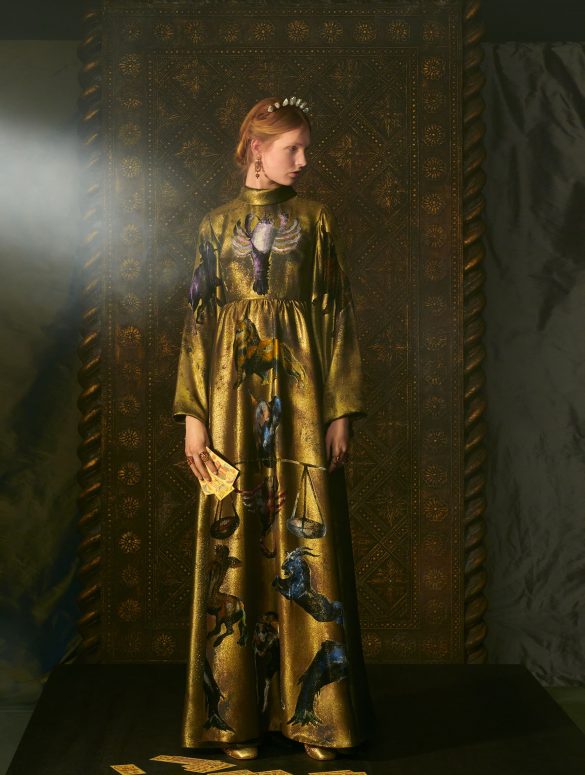 From Divinity to Divine
From Imagination to Fabrication

“Qui suis?” asked the young girl dressed in black sitting at a wooden table in front of an older woman with a set of cards laid out in front of her in the opening scene of Le château du tarot, the new film by Matteo Garrone for this spring haute couture collection. She responded by telling her guest to pick any card in which the young girl chose a card with the image of the priestess, a start of a journey of self-discovery within a magical castle where she underwent tests and temptations before reaching some level of harmony in a moment of enlightenment.

The young woman could have also asked ‘Qu’est-ce que la haute couture?’ before wandering into the castle to encounter and to confront her personal fate and her destiny when she wandered into the castle and encounter various obstacles and temptations as on the way to meet up with her destiny, passing the many great haute couture dresses worn by characters from the tarot cards coming to life.

Haute couture is a gesture, first an act of the imagination, then the fabrication of unique clothes.

How to capture the dream of couture in the best way, showing the clothes’ emotion, and showing the actual collection isn’t at all a simple answer, especially in this moment of crisis. But, Maria Grazia Chiuri, the creative director for Dior women, had found a solution when she embarked on reading a novel by Italo Calvino about tarot cards. “The most important feature of my life – I would be both ungrateful and untruthful to acknowledge it immediately – has been my good luck; and I must also acknowledge my debt to the fortune-teller who have predicted it,” the house founder wrote in his autobiography. Chiuri connected to the famous sets of cards painted by Bonifaccio Bembo around the 1450s for the Visconti-Sforza families, extending the house’s associations with the mystery and symbols of divinity.

“The different cards are chosen to tell this story,” Chiuri said via Zoom of the film’s narrative.

“This is a journey inside the young woman as opposed to the other movie that we made for fall 2020, which is a journey around different realities, different characters in a magic world. This time it’s a journey inside of a person, like in a dream and in the consciousness of this girl,” Matteo Garrone, the Italian film director whose films Tales of Tales and Dogman investigated intersections real and unreal narratives, said via Zoom about this new spring haute couture film. “Hybrid. When you call an artist to work together, you have to give the freedom and creativity. For me, it has to be a film, not a film of clothes. Here, it has to be like his films,” Chiuri emphasized.

I never try to translate Chiuri’s vision. In the movie, we have tried to make a fusion, like a wedding between two visions – there is Chiuri’s vision with the clothes and my vision with the film and story in an organic way but something that can be recognized as our work. She gives me the freedom to make to film as real cinema.

– Matteo Garrone, on how he and Maria Grazia Chiuri worked together

Visconti-Sforza, the duke of Milano, was the main patron of the north Italian Renaissance painter Bonifacio Bembo who in the early fifteenth century painted the official portraits of Sforza with his worn and dirty red old military campaign hat and his wife Bianca Maria Visconti, as well as creating a special tarot card deck for the Visconti-Sforza family. Bembo’s embrace of Neoplatonism, the Renaissance revival of Plato’s cosmology of an orderly universe, governs rationality with a slight Christian spirituality dose.

Italo Calvino was an Italian journalist and writer of short fictions whose two parts novel – Tarocchi: il mazzo visconteo di Bergamo e New York published in 1969 and the second half The Tavern of Cross Destinies were combined into Il castello dei destini incrociati in 1973 (The Castle of Crossed Destinies). The novel, which is the foundation of this film, recounted the story of a group of travelers who had lost their speaking abilities while traveling through a forest and had to recount their tales via tarot cards then retold by the narrator, thereby exploring how meaning is created either by the author, by the characters, or by the images of the cards all of which are opened to other interpretations.

The real problem in this big crisis and the risks are that we may be losing the artisanal work if we don’t find a way to maintain their ways of working and the craftsmanship.

“In this collection, there are some techniques like mixing silk fabrics and feathers on a cape that requires this knowledge,” Chiuri said of the critical needs for fashion houses to keep these crafts afloat and also the prime reason for choosing the filmmaker Matteo Garrone as he is an “artisanal” director and creator. The cape in question is a light grey silk long coat embroidered with colorful hand-dyed feathers in extremely complicated and dense patterns worn over a sky blue flame silk dress.

By encapsulating her Dior Haute Couture with a bit of mystery and also a lot of enchantment, Chiuri is, in fact, opening the possibilities of haute couture first with the imagination then onto the extreme fabrication, the extreme craftsmanship, the extreme decorations, and the extreme lush fabrics of the greenish-gold lame dress draped to form a single piece of devoré velvet with hand-painted millefleurs print worn by the Temperance, the gold and burgundy jacquard bustier dress and long coat or the light green bustier gauze dress embroidered with hand made flowers.

“The certain looks are chosen for the film because of the special characters of the tarot cards that work with the story of the film,” Chiuri said of the process of selecting among the total of 45 looks the 16 outfits worn by the various representatives of the Devil, the Fool, Death, Justice, the Sun and Hanged Man.

The silhouettes of the haute couture look not shown in the movie reveal how Chiuri is fomenting and evolving her fashion towards a more feminine feel and building on her own idea of what a new shape for Dior can be.

Dior’s heritage silhouettes starting with the 1947 New Look, had always been about structures, structures in the tailoring, and structure in the dress, all measured with a degree of scientific precision. The H-line in 1954, the A-line in 1955, Tulip dress in 1953, and even dresses in silk taffetas retained the rigors of the cuts that looked slightly more masculine. The silhouettes are long and slightly flare with fluid dress shapes appearing like small ocean waves across the model’s body like the black-draped and twisted navy silk lame dress.

In this haute couture collection, the fashion direction is more forceful and much clearer than with the ready to wear shows, the soft and the rigid merge seamlessly in elongated forms like the long pink lamé twill dress with Watteau back dress worn by the Moon, the long pleated gauze dress in gray and gold embroidered with crystal jewels worn by Death, and the yellow long dress with plunging neckline in front and back in gold laminated gauze worn by the Devil in the film. The last dress – Numéro 378, a bustier dress embroidered with handmade flowers – testifies to this stronger feminine feel. It is also Chiuri’s 378th haute couture outfit since arriving at Dior in mid-2016.

Even Chiuri’s own versions of the classic Bar jacket, now in anthracite wool with draped and knotted closure, is paired with a sheer black chiffon pleated skirt and a slate organza blouse or in a midnight blue wool tweed worn with a black sheer embroidered long skirt, the designer managed to soften the house’s masculine signature look and structure with the sheerness of the chiffon that reveals the skins of the legs underneath being covered. In the film, this merging of the masculine and feminine took place at the end when the young woman, in a moment of an apotheosis, became the ‘oneness,’ albeit slightly more feminine.

Pietro Ruffo, the Italian artist whose intricate drawings, digital works, installations, and paintings prod the belief systems underlying political, social, and ethical ideologies as well as issues of human freedom in pencil drawing series The Political Gymnasium or the recent Beslan doppia mappatura (Beslan double mapping), made intricate drawings to 3D embroidered patterns. Ruffo has worked with Chiuri before notably designing the décor of the fall 2017 haute couture and the recent Dior Around the World Capsule comprised of graphic motifs by the artist in the house signature bags totes.

Here, Ruffo distilled the essence of the cards’ images in taking out the human figures and created drawing patterns embroidered in a long dress in devoré velvet with gold zodiac print or in a long white cashmere coat fully embroidered with various colorful zodiac motifs.

I hope to continue in the film as I love to do films because the emotions shown in the film is incredible. They are really two different things – two separate ways of expressions. The film is something that you can go inside, and it can be very dreamy. The runway and the film are two different languages.

Envisioned with a sense of emotion to the clothes that perhaps a straight forward runway show may not be able to even with the staging is super decorated, this high art film delivers on its narrative strength and the strength of these handmade artisanal garments. The film also touched on the emotion of uncertainty at this moment with a douse of spirituality.