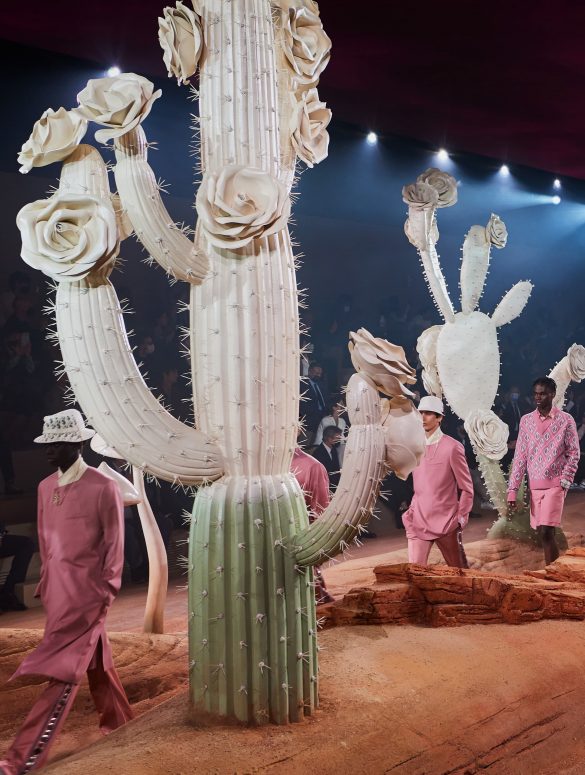 At Dior, each season, the prime directive is the renewal of the house’s heritage. Each new collection is a translation of the Dior’s signatures and history and transmitting the Dior idea, now injected with a dose of the present zeitgeist.

The decade 1947-1957 is the super fertile ground during Mr. Dior’s reign. During that decade, the heritage seed of the house sprouts new branches and new flowers in each new collection destined for a new audience and a new generation looking at luxury fashion to absorb the meanings of the clothes, the sneakers, and the bags. The fabric of Dior history weaves into new clothes made for the now.

Every Dior product has a history story or imbues with one; every Dior-tailored single breast jacket has a tale.

A photograph from a magazine shoot of the Fall-Winter 1951 haute couture in Athens spawns the recent Cruise 2022 show.  A loose belted jacket made for the Japanese market in 1951 gives birth to the Spring 2021 women’s show last September. The haute couture archives from the early 1950s generated the ornate and embellished clothes for the men’s Fall 2020 collection in January 2020.

The giant white roses planted on the sand, along with a few mushrooms and cacti that lined the runway of the live show of the men’s spring 2022, are both past and present at the same time. Dior’s famous gardens full of roses and the sandy rocks and cacti of the Southwest Texas plain merged in this setting meant coming together of different cultures stimulating new conversations and new clothes. Somewhere too in the faux dunes as decoration for this spring 2022 show is a longhorn cattle skull, that quintessential remnant of the American Southwest often featured prominently in classic Western films.

The men’s artistic director, Kim Jones, now collaborated with the Houston-born rapper-artist-producer-writer Travis Scott. Based on a journey that Mr. Dior took in 1947 to the U.S., first stopping in Texas, the memories gave rise to the colors of the deserts, the canyons, and the desert flowers provided the soft pastel for a few of the haute couture collections that followed this groundbreaking trip for the house’s founder.

Now, these two worlds – Paris/Texas – again collide in subtle manners inside a grey box structure erected on the ground of the Hôtel des Invalides.

The idea behind this joint operation is rooted in Jones’s central design ethos, where the designer frequently opened dialogue with other artists. And now a giant rap musician with a massive fan base, a visible artist whose lifestyle aligns with how Dior Men wants the brand position, catering to a new young audience.

In this spring collection, there are plenty of clothes specifically made for these young men. Hopefully, these new consumers for Dior in the critical Gen Z market can start with, say those graphic sweaters with words written on the sleeves ‘If you can read this I must love you to let you this close’ in white capital letters knitted into the jumper.

These words and these graphics woven on these knits – a short sleeve green floral with a green shirt and flared pants or a light coffee t-shirt imprinted with two heads over a coffee shirt and flare pants – are a result of the dialogue exchanged over the past few months between Jones and Scott. The Dior blue logo transforms into abstract letterings as an ecru sleeveless knit worn with black wool pants and a waist belt Saddle Bag with white leather pattern stitching.

For all the more sporty clothes in this collection, tailoring remains the backbone of Dior Men. How to bring sophisticated tailoring to this young generation so profoundly entrenched in the SNS ethos is not an easy task but one that this show provides clarity.

The tailoring here is super soft shapes – light shoulder, narrow armhole – guided by Dior’s 1956 ‘Arrow’ line. The emphasis is on a more flat and straight-line form that has now evolved into flowing light gabardine wool Oblique jackets with side buttoning closure and a curve jacket center front that makes the jacket still feel a single rather than a tight cross body double breast. The slim cigarette pants with flare from below the knee provide a break from this very linear but relaxed cut.

Plenty of sports looks await those more averse to pantsuits or coat suits. A brown varsity jacket with a giant D at heart or in various knits and knee-length shorts offer an alternative to the Oblique suiting made with Scott’s style blessings. The Dior logo from the 1960s becomes a new graphic logo canvas on sneakers and the new double Saddle Bag with a stirrup handle hooking the two sides together.

Central to Jones’s work at Dior is the designer’s work with different artists who enliven the garments.  This time the artist George Condo hand-painted a series of jackets and shirts – these items will auction post-show to raise funds for scholarships for creative talents.

The first with a smaller audience, this calm spring show, marks the return to the runway for the men’s side, while the women showed Cruise 2022 and Spring 2021 with reduced capacity. No doubts, there are plenty of merchandises ready to fly off the shelves in the next half year.

That said, this spring 2022 show is also light on new design elements.

The silhouette of the suit, now softer in more fluid fabrics, Jones had shown in prior Dior Men collection like a similar chocolate version in his debut Spring 2019 show. Then the pants were tapered at the legs; now the pants have a flare, not bell-bottom covering parts of the footwear, primarily new range of sneakers not dress shoes.

Elsewhere, in the show the range of clothes repeated itself into groupings only the colors, the fabrics and the decorations separated one group from another. The series of black looks that opened the show became the four pink looks became the acid green looks became the chocolate looks finally became the white looks at the end.

There is another essential heritage at Dior Men rarely mentioned. Hedi Slimane, the designer who launched the men’s brand in 2000, put Dior Homme at the men’s fashion universe center. At the time, there was Dior Homme, and there were other fashions. That was how powerful the Dior Homme brand was at the turn of the new millennium.

In his seven years at Dior Homme, Slimane’s particular aesthetics, his penchants for subcultural music, and his ability to feel the pulse of the young men growing into fashion were his unique ethos. The designer created his Dior Homme collections, changing the course of men’s fashion. Slimane’s clothes influence how many young men dress at the time, whether in Dior Homme or not.

Instead, Travis Scott has undoubtedly provided ammunitions amply for success at retail and will surely amplify the Dior Men brand, but not so much in terms of fashion design. Innovative fashion design is the foundation of Dior, especially that 1947-1957 decade.