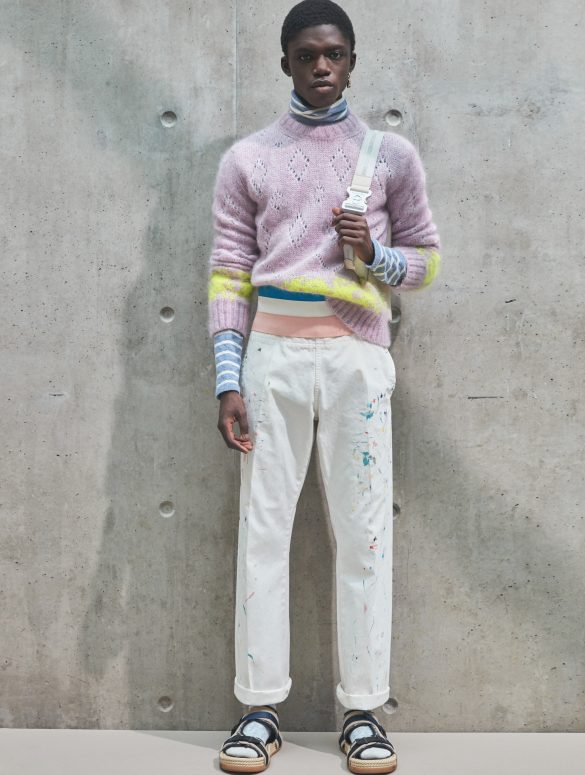 Art as Life Experience and as Fashion

“My name is Amoako Boafo and I am an artist,” said Amoako Boafo in his studio in Accra, Ghana in the first of two installments – ‘Portrait of an Artist’ – directed by Chris Cunningham working with Kim Jones, the Dior Men’s Creative Director, as part of the launch of the Summer 2021 collection on this last day of the Paris Men’s digital fashion week.

“As a kid, I had a few friends that were also interested in drawing so we [would] just sit and compete [at] who is best in drawing. I do portraiture and I do figuration. When I do portraiture, I like flat colors because I want a background that compliments the portraits. I like to keep it simple so people can get the expression,” Boafo explained about how he works as the camera zooms in on a new painting of two men smiling, one wearing an orange tartan bow tie with a black vest and pant, and the other in a black suit with an aqua blue shirt and white gloves.

“The people that I paint are friends to family, and people that I admire to people that create space for other people to co-exist in it,” said the emerging artist whose exhibition Reflections in 2017 and Black Diaspora in 2018 launched and catapulted his recent entry into the global art scene, with portraiture paintings that redefine the visual boundary of how ‘blackness’ is viewed in society and in culture in ways that shatter the ready-made and ingrained perceptions of race.

“I tend to look at characters that have that sense of style in fashion. I mean if you look at some of the paintings that I paint like ‘Hudson in a Baby Blue Suit’ (2020) – he is a model and I like his sense of fashion. I like to see how they transfer my finger painting techniques into clothes,” Amoako said as the film migrates from Accra to Paris, and inside the atelier with a model standing in a bright neon yellow motorcycle jumpsuit with a brown silk tuxedo sash belt.

“When I was in Ghana I saw a new work, which has a guy in an ivy shirt and that was the starting point for the ideas of taking the textures and the patterns from his work and the colors, and really turning that into the portraits coming to life. The styling of the photographs is really looking at his paintings and seeing the characters he created and what he was painting in reality, and then bringing it back to life in a different way,” Kim Jones revealed from his Paris studio about how he has always wanted to work with an African artist having grown up in East Africa. Meeting Amoako in Miami last December during his pre-fall show at Art Basel Miami Beach was a chance occurrence that became a meeting of like-minded artist and couturier and began a process that translates art to clothes as seen in a fast-paced kaleidoscope montage in the presentation film.

Hand techniques and crafts are central to both Amoako and Dior, making this collaboration a natural selection. “It’s a fingerpainting technique. I just wear my gloves and I have my colors, which would be umber brown and blue and then I have some yellow and red. And I do magic with it,” said Amoako, in the same way, the petites mains at the atelier hand created each of the garments with meticulous attention and devotion to traditional craftsmanship that is intrinsic to Dior.

“The idea was to make a trompe d’oeil. The design team worked out the placement on a coat, and then we developed a paper pattern for the various cut-outs. These patches are known as inlays,” said the head of the men’s atelier in a black and white video on Dior’s Instagram, the morning before the official unveiling of the savoir-faire as she showed how each is individually cut from white paper and put onto black fabric, to hand-sew to create the 3D patterns on a black coat.  “We inlaid the face and outlined it with passementerie, using a trim,” she specified. The act the atelier hands cutting each of the black tropical wool’s irregular circle pattern and the act of the atelier hands assembling the pattern into different sections on parts of a jacket, these acts of the handiwork at Dior parallel the acts of careful finger painting as Amoako executes his canvas. Amoako’s overlapping strokes creating a textural pattern for the skin on the face of his subjects is the same as how the Dior’s petites mains assemble each jacket or each coat.

Clothes play a principal role at the center of all Amoako paintings – each shirt, each tee shirt, or each suit envelopes each individual, painted from real life.  Yellow Turtleneck is the name of a 2018 canvas. The green floral print short sleeve shirt with rolled-up sleeves and deep forest green pants worn by the person in Green Beret (2020) is now rendered with specially printed green ivy weed patterned fabric that is reminiscent of the ‘May’ haute couture embroidered strapless dress from Spring/Summer 1953 and worn over a windowpane striped knit turtleneck, charcoal gray pleated linen short shirts and a leaf green tuxedo belt that added a formal feel. And yes, the beret is part of the look but in the Dior grey.

Art aside, what about the clothes? A linear and clean silhouette dominates with straight cut single-breasted jackets and coats cut a bit above the knee paired with short shorts or with cigarette pants. A black spread collar single-breasted coat with silk short shorts, a two-button light grey tropical wool single-breasted jacket with a cotton underskirt and slim pants, a black single-breasted coat with white flare shorts and pink Dior lace tank, and a light grey sleeveless jacket with the sleeve attached at the neckline over the lapel paired with matching shorts are the key and exemplary looks in this concise and well-edited collection. Part 2 of the presentation dwells deeper into the substance of these clothes.

The silk tuxedo sash belt moves the feel of the clothes away from the sportswear and streetwear ethos prevalent at luxury brands in the past half-decade. Here there is none of that streetwear stuff, not that Dior does not sell those products – Dior does but it is elsewhere, not in this line up of Men’s Haute Couture. This has been Jones’ personal mission since his arrival two years ago, giving the house a unique position in the growing global menswear business. Here, the clothes feel less heavy-handed than in the fall show in January, when the idea of applying haute couture was done in a more decorated way.

This collaboration for the spring collection is less about deploying Boafo art as graphics decorating fabrics of the garments – yet there are a couple of knit sweaters visibly featuring the art. It is central to the wider efforts by Dior to recast the brand values to a new generation of consumers, a new casting much more conscious and much more adamant about each brand sharing their values and their aspirations; fashion to be worn but also recasting in a manner that preserves Dior’s heritage and now embracing a larger cultural role.

Jones has perhaps chosen the right moment, as today the conversation on race has changed in significant ways. In these moments since the recent BLM protests across the country and across the globe, it is poignant to just recognize this simple fact: how society produces ideas about a particular group of people, and how one sees people is how one treats them, and how one is treated is how one is seen by others. Perhaps highlighting the work of an artist who questions the rigid tenets of representation and an artist who seeks to redefine the experience of blackness in painted pictorial forms, free from the stereotypes and the licenses, and Dior by developing a new language through clothes by way of an art experience, can push to amplify positive evolution.

Changes start with refocusing the eyes, educating the mind, and also perhaps embracing the clothes from a brand that imbues these values and these viewpoints, especially among the new generation of consumers. Perhaps in the future, the reverse can happen where the sitting subject would be wearing a Dior Men’s outfit in an Amoako painting.