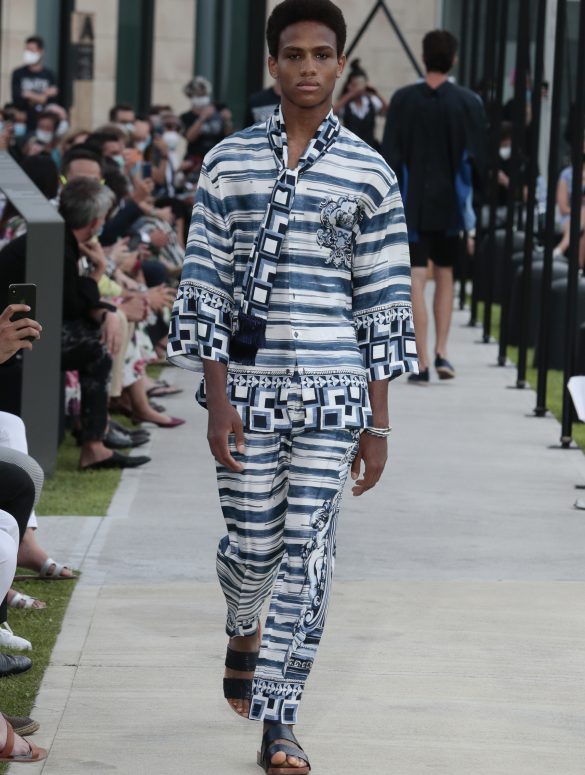 In staging Dolce & Gabbana’s live full physical runway show that supports the Fondazione Humanitas Ricerca – a nonprofit medical research foundation – at the campus Humanitas University, which is the largest independent international medical school in Italy located in the southern suburb of Milan, Domenico Dolce and Stefano Gabbana imbue substantive humanitarian purpose as an added value to their brand and their spring clothes.

Since early this May, the designers have collaborated with the Fondazione on the DGFATTOINCASA, an ongoing project that features digital workshops and tutorials covering different aspects of traditional and artisanal crafts made in Italy with the efforts to raise funds for medical research at the university, working together with For Funding by Banca Intesa San Paolo to gather donations to support the foundation’s research.

Outside in the courtyard on the grounds of the University, the Italian operatic pop trio Il Volo – Gianluca Ginoble, Piero Barone, and Ignazio Boschetto – all wearing navy suits and white shirts performed live throughout the entire show in the season’s first full live fashion show, with a small audience sitting with strict social distancing and broadcasting live digitally. The show is in total compliance with Italian health regulations that are currently being enforced in Italy.

As the trio sang hit tracks from their various albums including O sole mio and Un amore cosi grande, a hit song from their Grande amore breakthrough in 2015, models exited one by one into the courtyard wearing a well-edited display of signature DG tailoring, casual and sporty clothes with fabrics in solids, prints and patchwork shades of white and navy that evoke the iconic sea blue and white and geometric tiles and flooring designs and decorations of the seaside Parco dei Principi Sorrento on the Amalfi coast.

As for the men’s spring clothes, the show reprises the many DG menswear signatures developed and refined over the past three decades since their first men’s show in January 1990, with a bit less decoration and no embellishments of any kind. The show opened with a model wearing a print bathrobe and matching swim trunks, perhaps intentionally to create a more relaxed ambiance for the looks that followed. Superb tailoring is a DG trademark by now, here manifested in the array of unstructured slim-fitted jackets, some over large pants, others with cigarette pants. A slim white pantsuit or one in light yellow are two summer-fare suits, perfect for a seaside resort or for getaways in the mountainside.

DG cuts their double-breasted jacket very close to the body in a manner that accentuates instead of hiding the body behind the garment. The navy double-breasted suit with flare pants in this show is a perfect example of this tailoring cut with an emphasis on a tighter waist and natural shoulder. You can see the shape of the torso and then the waistline.

Casual looks are included in the many versions of loose fitted patchwork jeans, printed tanks, or mixes and matches of knits and shirting.  Among in casual side of the show are the elbow sleeves worn with a flared pants or blue large denim pants with classical Italian male statue prints on the leg paired with a navy knit tank.

As I watch the show live on the brand Instagram, I noticed quite a few immediate reactions from the global audience on the right side of the screen, making comments from their first reactions that were populating on the left side of the screen. The show manages to evoke an outpouring of emotional responses from the global audience that tuned in live. That’s a rare feat to accomplish in this digital era.

As a fashion digital broadcast, it is clear that streaming a live show is superior to any of the art films unless the films are done with exceptional and crystal clear creative direction.

Without a doubt Il Volo’s performance with their deep voices blasting the words of their songs in Italian coupled with the fact that this was a live streaming rather than a pre-recorded play surely aided in sprouting this kind of emotional response, which has not been common since the start of this season’s digital format.

When the show ended, Domenico and Stefano came out wearing blue facemasks to thank the audience for wearing. They joined the head of immunology at the University who spoke about how creativity in fashion is similar to creativity in immunology research, with the idea of creativity without borders.  In other words, fashion with a sense of purpose and fashion with a sense of service were both on display in the courtyard of an international medical school and research facility not far from Milano Linate airport.