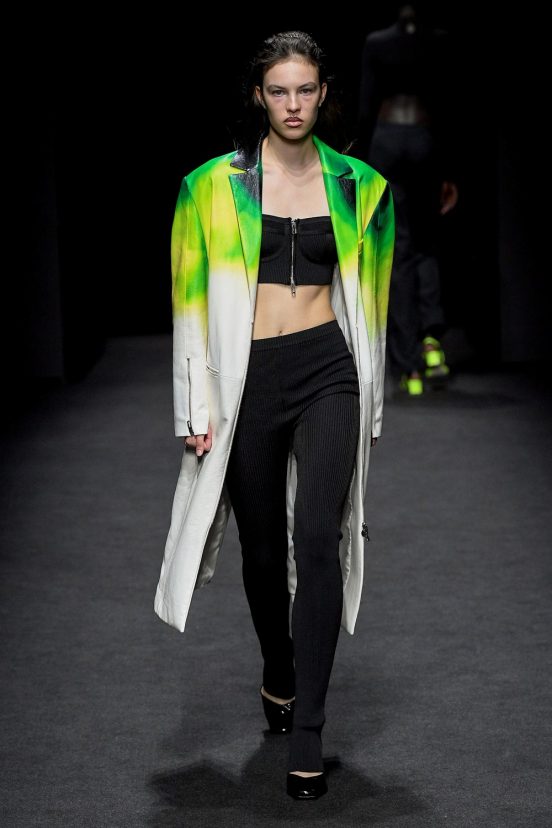 Elements of seduction for a strong and modern woman

Fashion shows in Milan are notoriously late, and Drome, unfortunately, was running way behind schedule through no fault of their own. However, it gave me a moment to consider the surroundings as I sat under the green and blue moonbeams of light that played over the room and think how far Marianna Rosati had come.

She grew up in a family that specialised in leather goods, so when her family decided to launch a new project in 2009, she became involved as the head designer and subsequently, Drome was born. Rosati has always been one for pushing the boundaries of her designs by using the latest technology and has quickly become known for cutting edge pieces, skillfully crafted in leather. This distinct handwriting has garnered a reputation for being an innovative brand, and today, her collection proved exactly that strong aesthetic.

This collection is for a strong and modern woman with all the elements of seduction – bare skin, extreme necklines and cutouts.

The cuts in many of the silhouettes were intense and architectural; revealing slithers of bare skin. Here skilled craftsmanship, using form to follow function, came displayed through the leather pieces, cut at diagonal points to the body, while printed silks were drawn through the opening to create another dimension. Her colour palette of white and black interrupted by shocking electrical pink, blue and lime, incidentally, was evocative of the coloured shafts of light at the show’s beginning.

When interviewed post-show, Marianna explained her philosophy behind the collection.

First, she wanted to challenge the way leather is used traditionally; that leather had endless possibilities.
But equally as important, she said: “it is amazing to be back; this collection is about energy, the kind of energy that we are feeling from everybody, it’s about releasing what has been locked inside us after so long.

The designer also wanted to express her passions – cinema, photography music- which all present a colourful and surreal electronic energy. So for S/S 22, Mariana included new materials in her collection, in different sportswear-inspired outfits yet still with a sense of sophistication.

knitwear details were inspired by old nineteenth-century underwear and corsets, but she reimagined these details in technical knitted material.

Here, leathers were digitally printed, achieving an almost dipped ombre effect. Her foray into abstract art also informed the bright, vivid prints that were in sharp contrast against the white leather.

Marianna’s approach to her designs is intelligently thought out.

As designers, we can create the identity, but then the wearer makes her own identity.

She wants the woman who buys her clothes to show her body; it doesn’t matter your body shape or age, go out there and be yourself; yes Marianna, today you did just that.