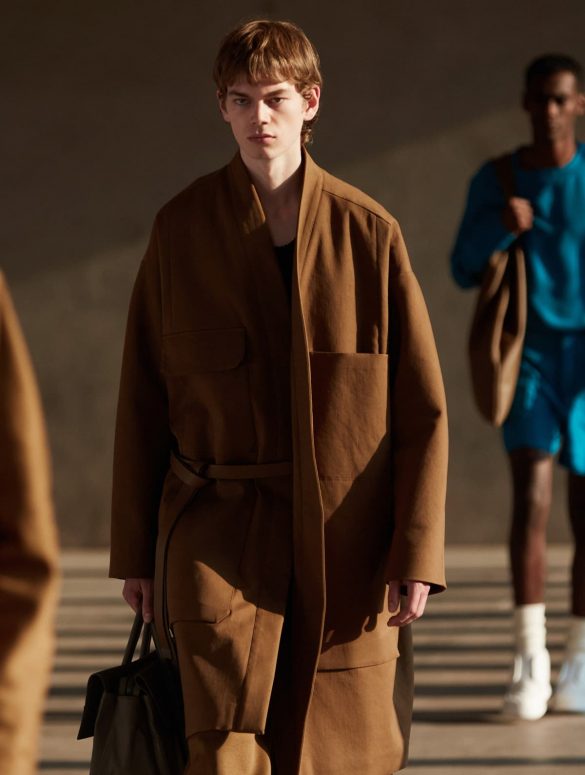 The Milano Men’s Spring 2022 show season begins today. The last season ended in mid-January with a primarily digital activation approach with just four live shows with small audiences and an added option of post-digital appointments for those needing to see physical clothes at showrooms.

New on the return to the live show circuit is Giorgio Armani. The designer will close the Milano season with two small shows in the courtyard of his via Borgonuovo home.  Harking back to the days before 2000 when all of the designer shows were held there before moving to the Teatro at the new high tech headquarters Tadao Ando designed in the more industrial area via Bergonuovo in 2000.

Armani will join with Etro and Dolce & Gabbana in hosting live shows, albeit to smaller audiences.

The opening day in Milano belonged to Ermenegildo Zegna.

The Spring 2022 film, shot outside of Torino, showed many models chasing each other inside a maze-like structure with careful planting enclosing pathways.  These models ran and moved around in a fast-paced action wearing the new fluid and loose fit shapes, coats, and knitwear in an array of light pastels – pink, sky blue, lime, white, sand, and olive. The models’ movements demonstrated the intention of a brand steep in the artisanal traditions adapting its craftsmanship in a fast-changing world.

In the past years, my goal is to marry the essence of tailoring, which is the heart of the house with the changing rhythms and attitudes of the ever-changing times now.

This evolution at Zegna is surprisingly fast since the return of Sartori in February 2016. Then, the designer initiated a new phase called the New Set, keeping the methodology and constructions of tailoring to create unique fabrications adapted to the evolving men’s fashion mindset with new designs and new silhouettes.

What Sartori establishes now are the seeds for different potential roads to further evolve menswear not just at Zegna but a new direction for a more intellectual and thoughtful approach to men’s fashion. Different in temperament and attitude, this new thinking relies not on the craze of the endless art and multi-brand ‘collaborations,’ the myriads of social media endorsements, or the streetwear drop business methodology to foster the requisite marketing hype.

In the post-show webinar preview, the designer meticulously revealed the details hidden in the construction of the collection so fluid that any traditional way of fabricating, say a men’s jacket, has been tossed to the side. Instead, Sartori shows how each of these new jackets is manual crafting of the fabric with cutting and draping done in such specific ways that the garments do not require any additional support, say linings, double facing, or paddings of any kinds.

A light beige hemp linen kimono lapel – the same lapel for a white heavy cotton jacket for judo – single breast jacket has a slight seam cut in the front shoulders. The arms sleeves can move without altering the natural shape of the curvature of the shoulder. As a single breast short ecru linen jacket with pleated pants or a knee-length brown hemp cotton coat – both with large patch pockets – these kimono jackets and coats have internal belts looping partially inside and partially outside the garment the proper level of belting adjustments.

“These adjustable jackets can go up or down two sizes each way depending on how the wearer wants to make the adjustments,” Sartori said. The designer showed the jacket’s versatility on a model wearing the back of a three-button herringbone three-button shirt collar jacket with drawstring built-in above the hips to adjust the actual shapes of the coat.

This season’s new shape is the boiler suit, not the old boiler suit but two pieces comprising an overshirt/jacket hybrid and long flowing drawstring pants. This new boiler can be worn, tuck or untuck into wide legs pants in light green, olive, or light charcoal.

Instead, Sartori deploys traditional menswear artisanal craftsmanship to create new forms and new shapes. There’s a saying that innovation comes from the perfect command of handicraft skills and creative application of these skills and know-how to new tasks adding new technology to the mix.

Yet, at the heart of Zegna XXX, it is still the traditional crafts at work. The artisan craft is still the base knowledge behind making the light pink mix cotton suit without fusing and lining by manipulating the fabrics through expert and ultra-precise cutting.  Or in, say, cutting the precision of the raglan sleeves on a long blue silk cotton coat with large patch pockets. A classic two-tone baseball tee shirt – the sleeve that extended to the neck is the raglan sleeve, named after Lord Raglan, the first Baron Raglan who wore the coat with these sleeves after losing his arm at the Battle of Waterloo.

I started on a path the past two seasons, spending more time with the craftspeople and changing my way of thinking and getting a lot of input from these artisans.

He showed a model in a light brown wide elbow sleeve shirt with a matching color straight-leg pants that he mentioned connote the idea of utilitarian uniforms similar to Italian office uniforms in the early 1950s. “Versatility and flexibility are key,” Sartori emphasized. Perhaps the long brown duster coats can define this new versatility as an outerwear coat or as a lounge coat.

“We are opening a new atelier and factory in Novarra just to make these new suits because of new technical requirements of these new forms versus the more structured traditional suit,” Sartori said.

See Collection
WHERE FASHION GETS CREATIVE
Press ESC to close