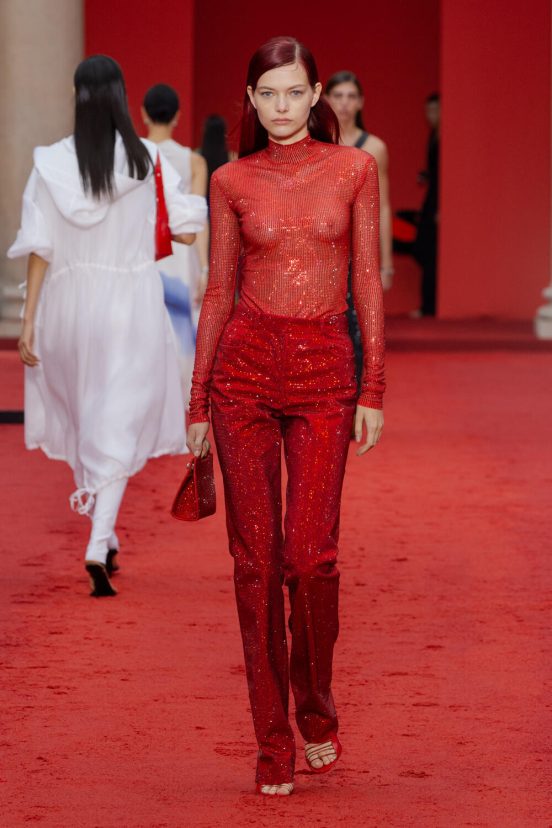 Maximilian Davis played a masterstroke for his debut at Ferragamo. Understanding the communicative power of colour and its emotive associations with time, place, and people, even before a single model took to the runway the commanding set drenched in blood red told you that Maximilian Davis had arrived. As keen observers of his namesake brand will recall, the hue was used as the background choice for the Fashion East Spring Summer 2021 lookbook, shot during the pandemic, which created a striking contrast for his slashed-to-there sexiness and elegant tailoring. Demonstrating the designers very real command of the powerful application of colour.

I wanted to pay tribute to Salvatore’s start by bringing in the culture of Hollywood – but new Hollywood. Its ease and sensuality; its sunset and sunrise

His opening statement of tone-on-tone tailoring (for both men and women) would have set the brands long-time clients at ease, if not for the fact that this was a mere respite for what was to come – it was also a credit to the designer, who in his first few months of studying the archives, has come to understand the Ferragamo woman’s essence.

His signature way around the female form filtered (not watered) down into the ultimate knitted base layers of tank tops, jumpsuits, and leggings, all interchangeable and offering multiple options for wearing alone or pairing with countless other categories.  This jumpsuit style also came in suede with matching maxi coat, a testament to true Italian luxury craftsmanship as the fluidity and fit of both epitomised what can be achieved by artisan ateliers.

There was an air of nineties minimalism in the straight-cut funnel collar jackets and longline pencil skirts, midi-column dresses, and angular shoulder bags, but the use of suede and satin elevates these era-defining silhouettes into the world of refined classics made relevant for today. Collarless mini dresses, draped bodysuits, and louche borrowed-from-the-boys suiting were also giving eighties executive realness.

The rise in resort dressing was also top-of-mind for Davis in the billowing fabrics of tunic dresses, hooded slips, and kaftans – his finale looks in a mix of solid and embellished sheers are the ultimate play on reveal-and-conceal that has permeated New York, London, and now Milan. A scattering of glitz was seen throughout as the main theme of New Hollywood brought in the glamour of a crystal-embellished second-skin top and skinny trouser set for the party girls, while svelte gowns revealed only a hint of skin for the more modest among the brands customer base.

Davis’ favoured powerful primary palette of red, set back with warm neutrals, stark white and black, when not being worn monochromatically were reworked as soft sunset ombré effects on chiffon. Not just for resort wear cover-ups, but for off-the-shoulder asymmetric tops for the boys too, leaning into the queer narrative (referenced in the notes as “flashes of fetishism”) which also saw a pair of leather shorts make it into the show’s opening looks.  American visual artist Rachel Harrison’s Sunset Series was a key inspiration for the degrade prints reminiscent of artistic brushstrokes on wet canvas, here we got vibrant solar orange and the palest sea blue added to the mix, couple that with the sand the models were walking on, and we got another nod to the designers Caribbean heritage subtly coming into play.

Drawing upon the sparkling red shoes Ferragamo made for Marilyn Monroe in 1959, the collection appears scattered with crystals; the Hollywood hallmarks of glitz and glamour refracted anew.

This early achievement of Maximilian Davis cannot be underestimated, but his clarity of vision, and deeply personal narratives which he has managed to weave so seamlessly into his collections thus far, coupled with the industry acceleration afforded by being an alumnus of the Fashion East programme meant that Davis was always destined to make a near flawless touchdown in Milan.

We can only hope his tenure with the 95-year-old luxury fashion house is long and fruitful, enabling the young designer to embed a dynamism and energy into the house’ codes, as well as repositioning it to face the future with the confidence of having one of the industry most-promising mavericks at its helm.