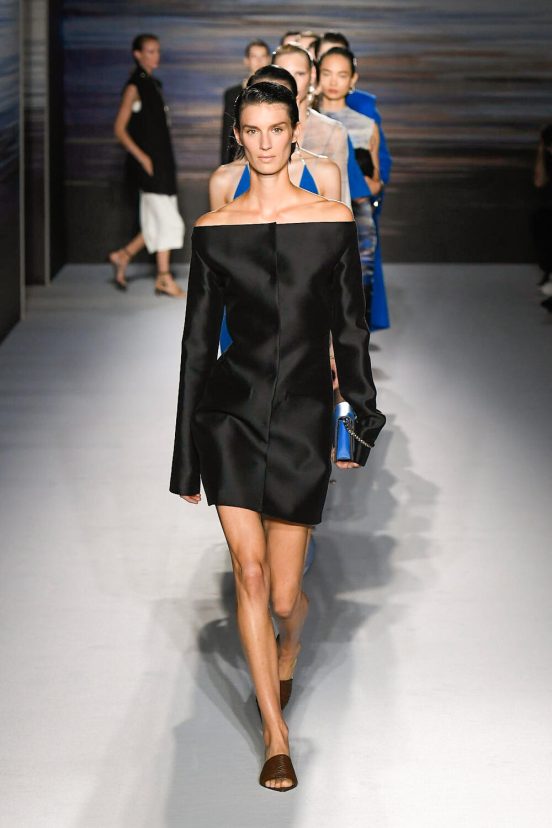 There are several highlights on the Milan Fashion Week calendar of presentations – many with unique qualities and values. Still, the one with such appealing grace is Giada, with Gabriele Colangelo as its Creative Director. Since 2015,

he has been the constant force and strength, delivering collections committed to an alluring feminine and minimal aesthetic while infusing into his forms the finest of details

– an attribute that sets the brand apart from most. There is also that certain something that pulls on the heartstrings at a Giada presentation. It always begins with the special magic eschewed from the Pinacoteca Braidense di Brera in Milan. Not only home to one of the largest libraries in Italy but one that, in itself, is awe-inspiring with its commanding chandeliers, old masters’ charm, and wall-to-ceiling ancient manuscripts. It is also a recurring home to the Giada seasonal collections. For S/S 23, Colangelo continued his exploration of the endless movements of the sea. On listening to his story of inspiration, one can feel and see the emotive experiences that this young creative drew upon. To define his continuing exploration of nature, Gabriele explained:

“I looked to the power and beauty of nature and I saw beautiful flowers growing by the beach and tried to infuse this message of serenity to the collection”.

His choice of the calming hues of blue, and pearl were all inspired by the colours that flowed between the sea and the iridescent hues of pearls. Here, Gabriele embraced a broader palette. Colours flowed from cobalt blue to black and brown, along with notes of desert rose, ice, white, pear and limestone. Perhaps a little more in-depth than seasons past and one that was astonishingly compelling. The seascape also inspired the patterns. There were outlines of flowers in delicate minimal strokes, while handpainted brushstrokes on surfaces emulated waves and shells. The ebb and flow of the ocean were palpable.

The tailoring was impeccable.

Gabriele’s architectural background is never far from his mind.

He approaches his silhouettes with a three dimensional mindset which informs all the components that go into his designs – from the front of the garment and around to the back. Such endless and emotive propositions.

The first outfit came carefully constructed. No darts to create shapes, just the cut at the side seams formed the feminine curves. Silhouettes were slim, “vertical and long or revealing and short” but all came with a fluidity of movement that is now an inherent signature for the brand. Strapless elongated bandeau tops hugged the feminine curves of jackets and coats while micro pleats molded and curved around the body. Gabriele mentioned that these were constructed from the finest viscose and lycra that although they may have looked flat, exposed beautiful coloured textures beneath the surface – just as in the depth of the ocean where a myriad of hues are refracted beneath the surface.

The beauty in the accessories is derived from nature and offered a calming zen-appeal. Gabriele explained that the pearl continues to be a very strong part of the jewelry, particulalry for for this season. Many of the pieces were made by hand and several evolved as the collection came to life.

A stunning piece in white, emulated the form of a flower, made to just curl around the tip of an arm – a caress that spoke to both the fragility and sensuality of the collection. The focus to the neck was one of soulful precision.

One such piece in gold ran around the base of the neck to fish in a long strand at the centre of the back, complete with a shape crafted from onyx. The shoes were new, with elongated toes and sculptural heels and long straps that were edged in sea-stones.

This season is one that appears every component has come together for Gabriele and Giada. He spoke in admiration of his team, of how they all put so much love and devotion into the collection. It was tangible. Gabriele Colangelo’s soulful, yet vibrant simplicity is infused into the brand’s signature language. Where a delicacy and quiet empowerment evolves through the lightness of this seasons’ silhouettes. Once again, flowing together like the waves in the ocean.